At the Center of Hip-Hop and Poetry

What began as a hashtag to celebrate black womanhood, Black Girl Magic quickly leapt off social media streams and into the lexicon of writers, politicians, celebrities, and activists. What is Black Girl Magic? No two people will define it the same, but a new poetry anthology released by Haymarket Books in April, The BreakBeat Poets Volume 2: Black Girl Magic, is allowing black women who grew up in the hip-hop generation to deepen the conversation through their poetry. 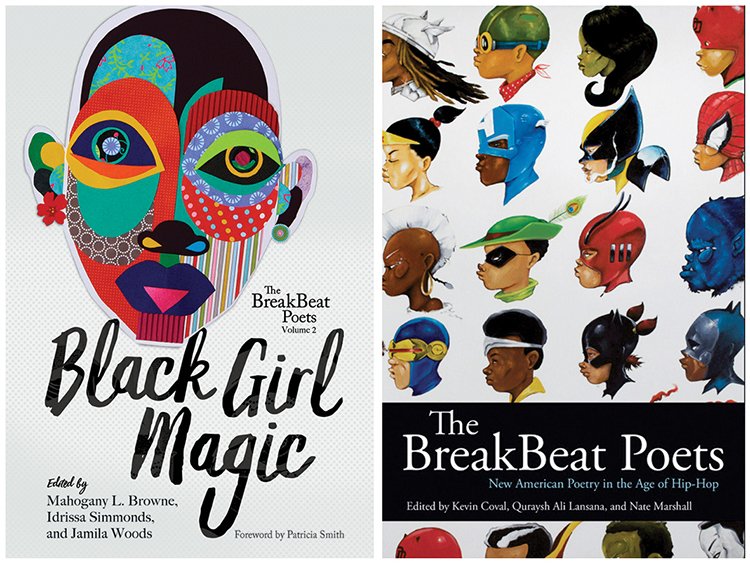 Mahogany L. Browne, who edited the anthology with fellow poets Idrissa Simmonds and Jamila Woods, says the book challenges stereotypes about black women. “We’re not allowed nuance; we’re not allowed to be angry and sad and loving—we’re supposed to be strong, stand up for everything,” says Browne. “This is about how we create ourselves, how we re-create ourselves...how we rename ourselves, how we bring our ancestors into the room, and how we invite those that don’t serve us out. Black Girl Magic as a whole is a resilience, a celebration, and a reclamation of the black woman body.”

The idea for the anthology was born a few years ago, when Browne was the featured poet at Louder Than a Bomb, an annual youth poetry festival in Chicago cofounded by poets Kevin Coval and Anna West. Browne read a poem called “Black Girl Magic,” which she wrote specifically for the event, and the audience response was immediate and visceral. “To see a poem hit the air like that,” Browne says, “after that response, I said, ‘This is bigger than me.’” (Browne later performed the poem on a 2016 episode of PBS NewsHour’s “Brief but Spectacular.”) After the festival, she mentioned to Coval that there should be a Black Girl Magic anthology, and a few months later he phoned her to move forward with the idea.

The anthology features more than a hundred poems from new and established voices, including Elizabeth Acevedo, Syreeta McFadden, Morgan Parker, Aracelis Girmay, and Angel Nafis. Poet Patricia Smith, the 2018 winner of the $100,000 Kingsley Tufts Poetry Award, contributed a foreword to the collection. “I relentlessly love my sisters,” she writes. “We have taken back the right to name ourselves.” Each section of the anthology is named after an excerpt from the work of a notable black woman writer or activist. It begins with a section focused on the black woman’s body in all its forms, “Collector of Me,” inspired by poet Sonia Sanchez, and ends with a section centered on joy and resilience, “Jubilee,” inspired by novelist Edwidge Danticat.

The poems in the collection, influenced by the rhythms, lyricism, and expressiveness of hip-hop music and culture, speak to the many dimensions of black womanhood. In “My Beauty,” Justice Ameer writes about gender identity and self-love: “And ain’t that being a Black woman / Being forced to destroy herself / To make a man more comfortable / Me and my beauty stopped looking for him one day / And suddenly / I saw my body / My beauty saw a woman.” In “#SayHerName,” Aja Monet writes about the campaign to remember black women victims of police brutality: “I am a woman carrying other women in my mouth.”

Black Girl Magic continues the work of the first anthology in the series, The BreakBeat Poets: New American Poetry in the Age of Hip-Hop, published by Haymarket Books in 2015 and edited by Coval, along with poets Quraysh Ali Lansana and Nate Marshall. Focusing on black women was the perfect next step in the series, Coval says. “Black women have been and remain at the center of hip-hop culture and poetic practice. This anthology is some of the receipts and a peek into the future. Here are some of the most important and freshest of voices on the planet rock.”

The anthology series will continue to be a space for marginalized voices, and work is already under way on the next volume. “Halal If You Hear Me,” edited by poets Fatimah Asghar and Safia Elhillo, will be focused on writing by Muslim women and LGBTQ Muslims and will be published in 2019.