A New Center for Black Poetics

From late nineteenth-century poet Paul Laurence Dunbar to Harlem Renaissance icon Langston Hughes to contemporary poetry stars Rita Dove and Toi Derricotte, the influence of African American poets on America’s literary culture cannot be overstated. But until recently there was no center that had significant institutional support and was specifically dedicated to sharing and studying the legacy of African American poetry.* Earlier this year, poets Dawn Lundy Martin, Terrance Hayes, and Yona Harvey decided it was high time to start one. The trio launched the Center for African American Poetry and Poetics (CAAPP) as a creative think tank to spark conversation and collaboration among poets and other artists, and to promote and archive the work of African American poets for future generations. 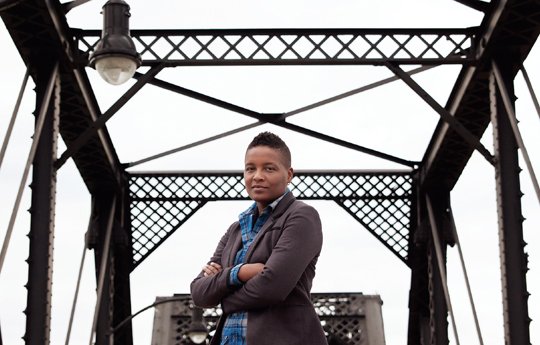 “We recognized that there was this huge impact that African American and African diasporic poets were making on American arts and letters,” says Martin, who codirects the center alongside Hayes. “We wanted there to be a place where we could really think and work through what that means.” Housed at the University of Pittsburgh, where both Martin and Hayes teach in the MFA writing program, the center held its first event in March—a set of conversations and readings about race, poetry, and the humanities—and will host similar events throughout the academic year. Its first course on African American poetry and poetics, led by Lauren Russell, the assistant director of CAAPP and an English professor, will be offered to undergraduate and graduate students during the 2017–2018 academic year and will feature visiting speakers each week. Hayes and Martin also plan to launch a residency and fellowship program, through which poets, artists, and scholars can work at the center for periods between a month and a year.

Part of CAAPP’s core mission is to archive and document the work of African American poets, which will be accomplished through both a physical collection of books and an online archive of lectures, readings, and discussions. While organizations like Cave Canem create space to nurture new work by African American poets, and other university centers such as Medgar Evers College’s Center for Black Literature and Chicago State University’s Gwendolyn Brooks Center work to promote black literature, CAAPP will focus specifically on the research and scholarship of black poetics, particularly as it relates to historical, artistic, and cultural repression, as well as corresponding social justice movements. “Cave Canem is twenty years old, and there still hasn’t been a large body of work about how it came into being or archival work around it,” says Hayes. “Our organizations historically haven’t had an opportunity to take care of our own information, to build our own insights around that work.... Now we are in a position to be our own historians and our own archivists, and write our own biographies about the importance of these roots.”

The University of Pittsburgh has long been a home for the work of African American poets. The university press, with editor Ed Ochester at the helm, has published notable titles by both emerging and established African American poets, recently Derricotte, Ross Gay, Rickey Laurentiis, Nate Marshall, and Afaa Michael Weaver. Hayes and Martin hope to work with the press on a book prize, and harness other university resources. “What a university can do is provide infrastructure, in a way that’s just not set up in most sectors of our society,” says Hayes. “Infrastructure and research capabilities.” The pair have enlisted faculty from other departments, including English and Africana Studies, to advise CAAPP and possibly teach future courses. “We think of ourselves as a start-up,” says Martin. “And like innovators in tech, we want to be open and inclusive as we generate new ideas about what it means to work in the fields of African American poetry and poetics. This seems especially important in these trying and divisive times.”

A significant part of CAAPP’s work will also intersect with the university’s MFA program. Graduate writing students will be able to take courses offered by the center and have the opportunity to help curate, design, and teach these courses. This goes hand in hand with how Hayes sees the MFA as an opportunity to teach students the tools and skills needed to hold positions of power in poetry and arts organizations. “A person who is interested in getting an MFA and being a poet can learn how to live in the world, whether they are directing centers or working as librarians, archivists, or critics,” says Hayes. “Just to alert and inspire a poet to do that is a possibility. Maybe you want to run a press or be an editor of a press. I don’t see why the MFA can’t be an opportunity to begin that conversation, as opposed to assuming that all you can do is write or teach.”

*Editor's Note: After this article went to print, it was brought to our attention that a center dedicated to studying African American poetry was already established before the launch of CAAPP. The Furious Flower Poetry Center, housed at James Madison University and founded by Joanne Gabbin, has been cultivating and promoting African American poetry since 1994. We regret the error.