I, Too Arts Collective

For nearly ten years the brownstone at 20 East 127th Street in Harlem was silent. Once the home of celebrated Harlem Renaissance writer Langston Hughes, who lived there for twenty years until his death in 1967, the three-story row house sat vacant, its dark stone walls overgrown with ivy, the paint of its once grand interior chipped throughout. The only evidence of the building’s literary history was a small plaque on the facade bearing Hughes’s name and designating it a landmark. 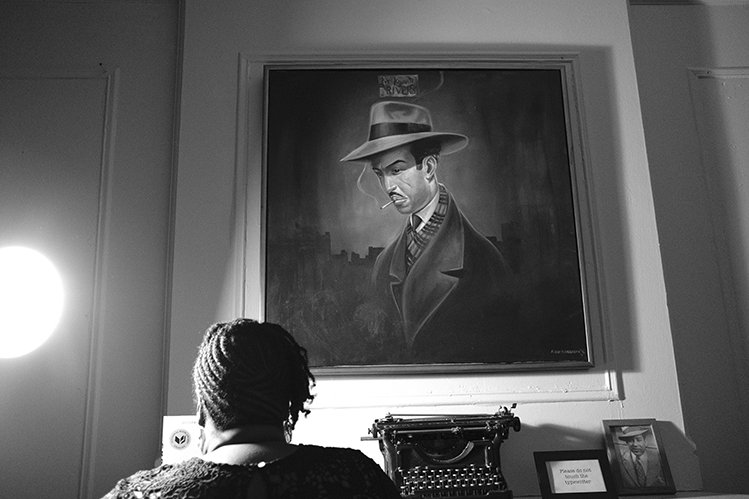 Renee Watson, founder of the I, Too Arts Collective, next to Hughes’s typewriter.

But today, thanks to the I, Too Arts Collective, the brownstone is once again bustling with creativity. On any given day one might hear the voice of a teen writer reciting Hughes’s poem “I look at the world,” or a community member reading at an open mic for the first time, or a distinguished author in conversation about the practice of writing. Established as a nonprofit organization by award-winning author Renée Watson, I, Too provides arts programming in Hughes’s house to underrepresented and marginalized voices. The collective takes its name from Hughes’s famous poem “I, Too,” which opens with the lines, “I, too, sing America. // I am the darker brother.”

Watson, who lives in Harlem, walked past the vacant house for ten years, disappointed that nothing had been done with the space. She was inspired to take action in the summer of 2016, after hearing that Maya Angelou’s Harlem brownstone, located just a ten-minute walk from Hughes’s house, had been sold for $4 million. Determined that another piece of Harlem and African American culture wouldn’t be lost, Watson contacted the owner of Hughes’s brownstone and shared her vision of a space dedicated to preserving the writer’s legacy. The owner also didn’t want to see the building become gentrified, turned into condos or a coffee shop, but told Watson she’d need to come up with a year’s rent to turn her vision into a reality.

Watson, who in addition to publishing several well-received children’s books—including most recently Piecing Me Together (Bloomsbury, 2017)—has years of experience in business and nonprofit arts administration; she established the I, Too Arts Collective in July 2016 and launched #LangstonsLegacy, an online fund-raising campaign to lease the brownstone. In just a few months, with the help of the literary community and private donors, she raised $150,000 toward the lease, renovation, and programming costs. Watson signed a three-year lease in October 2016 and along with the I, Too team and a group of volunteers, cleaned, painted, and restored the building. On February 1, 2017—Hughes’s 115th birthday and the beginning of Black History Month—the Hughes House opened to the public.

I, Too now hosts weekly open hours at the Hughes House, during which the community and tourists can visit the space, walk the same parlor floor Hughes did, and snap photos of his piano and typewriter. Watson says the brownstone is less of a museum, however, and more of a space for people to create. I, Too runs a number of special programs and events at the Hughes House, including creative writing workshops for adults and young people, a recurring poetry salon with an open mic, a monthly social event for writers and artists, and discussions with writers about their process and work. I, Too also rents the space to other artists and nonprofits to hold workshops, readings, and performances. Writers who have visited the brownstone include Kwame Alexander, Tracey Baptiste, Andrea Davis Pinkney, Angela Flournoy, Nikki Grimes, Ellen Hagan, Jason Reynolds, Jacqueline Woodson, and Ibi Zoboi.

Watson and her I, Too colleagues— program director Kendolyn Walker, social media director Jennifer Baker, and graphic designer Ellice Lee, as well as working and honorary boards of directors made up of writers and artists—want to empower artists as well as honor Hughes’s legacy. “I wanted something that would add on to what he left behind,” says Watson. “I think that is a powerful thing, to not just celebrate his work in theory or by reading but also saying, ‘This is what he wrote, this is what he said—what do you want to say, and how are you continuing his legacy?’”

The program closest to Watson’s heart is the Langston Hughes Institute for Young Writers, which hosts writing workshops for young people during school breaks and throughout the summer. Funded by the Ford Foundation, the workshops allow teens to learn about Hughes’s work and share their own poetry. “I always say whenever young people are in the space, that’s when I get emotional and feel like this is why I am doing this work,” Watson says. “What moves me is when I see young people writing and finding their voices and expressing themselves.”

After a successful first year, the collective is working toward its long-term goals, including restoring the second floor of the house to create studio space and a library, as well as raising money to establish a fellowship program for writers. As part of the program, fellows would receive a residency in the Hughes House and hold workshops and readings in return.

The organization’s ultimate goal is to raise enough money to purchase the brownstone. “I want this to be a place that lives far beyond me or anybody involved with it now,” says Watson. “This is not just a trendy thing to do, but a sustainable space with roots in the ground for everyday artists to develop their craft and for established artists to share their stories and their voices.”

A young developer discusses the genesis of her app, We Read Too, which offers an extensive database of multicultural books for young readers.