The Uni Project, a New York City–based organization that has created hundreds of pop-up reading rooms throughout the city to encourage reading and inspire learning, particularly in underserved communities, is marking its fifth anniversary this year by doing the kind of work that has made its first five years so successful. “It has always been about activating public space with meaningful ways for people to gather,” says Sam Davol, who, with spouse Leslie Davol, started the project in 2011. 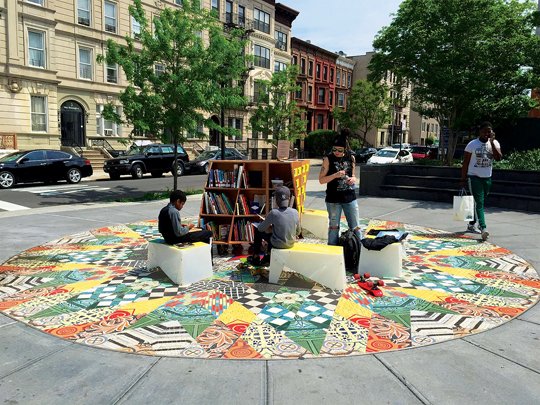 The idea for the Uni Project began to take shape two years earlier, in 2009, when the couple became frustrated that Boston’s Chinatown, the neighborhood where they lived with their two kids, had no library. In response, they created the Storefront Library, a temporary community library in a borrowed storefront. Emboldened by their work, the Davols, who moved from Boston to New York in 2011, began to research how to create library experiences in city parks and plazas.

Inspired by a library branch in Stockholm’s metro station and the New York Public Library’s Bryant Park Reading Room, they commissioned architects to help them design a “reading kit”—a transportable reading cart complete with stackable shelves and chairs, which would serve as the basis for pop-up libraries. “The mission was less about access to books and information than about creating a great experience for urban people, something that could let people express a value of learning and education, right at street level,” says Sam Davol.

The Uni Project debuted its first reading room in New York City’s South Street Seaport on September 11, 2011, and has since installed nearly three hundred pop-up libraries in over fifty neighborhoods. Most of the reading rooms are assembled outdoors for a few hours at a time, their shelves stocked with books donated from libraries, publishers, and individuals. The Davols estimate they’ve reached more than twelve thousand New Yorkers through the program, with reading rooms stretching across the city’s five boroughs—from Clinton Hill in Brooklyn to Ozone Park in Queens to Morrisania in the Bronx. And the project isn’t just confined to New York: The Davols have sent their reading kits to the Seattle Public Library and the Rose Fitzgerald Kennedy Greenway Conservancy in Boston, as well as to international sites, such as the U.S. Consulate in Almaty, Kazakhstan, and the Médiathèque Départementale du Haut-Rhin Library in Colmar, France.

As part of the project’s mission, the Davols try to create pop-up reading rooms in neighborhoods where books and libraries are scarce. “We’ve discovered that our reading rooms significantly increase feelings of community safety in some neighborhoods, which is especially important for women and families who want to be out and about,” says Sam Davol. “Reading together creates a way for people of all walks of life to linger in a public space, activating it, enlivening it.”

Not only does the Uni Project provide books to communities that need them most, but the Davols also try to curate collections that reflect the demographics of the neighborhood. “We have lots of books in Spanish, and some in Chinese,” says Leslie Davol. “We have a few books in Hebrew, Arabic, and French.... In Ozone Park, the Queens Library came through with a loan of books in Bengali. Some of our collection has been donated by institutions like the Museum of Modern Art, the Museum of Chinese in America, the Louis Armstrong House Museum, and the New York Hall of Science.”

The reading rooms offer more than just books—their open-air locations on bustling city streets spark conversations and encourage a more interactive environment. They are staffed by approximately twenty active volunteers, who help people find books and lead other educational activities, such as writing flash fiction, drawing, and even learning how to use a microscope. The volunteers reflect the diversity of the city: Some have come from Ecuador, Thailand, or China, while others have been middle-schoolers who just love books and want to get to know the city.

The project shows no signs of slowing down: More than a hundred reading rooms are scheduled to pop up in New York City this year. The project continues to expand its partnerships with the city’s libraries and parks, and the Davols are looking for new ways to reach more neighborhoods and grow their book collections. “A city,” Sam Davol says, “can never have too many books.”

Morgan Jerkins is a writer and the web editorial assistant at Catapult. Her work has appeared in the New York Times, BuzzFeed, the Atlantic, and Fusion, among many others.