In his third poetry collection, As One Fire Consumes Another, forthcoming from Orison Books in April, John Sibley Williams confronts the violent side of American history and its effect on our notions of self, fatherhood, and citizenship. “The poems speak of death and cultural roles, privilege and otherness, the little boxes we place one another in, and our often violent attempts to escape them,” Williams says. The poems, which veer from elegiac to declarative to prayerlike, drill down into the beliefs and fears that underpin this violence. “My children are learning all wars / begin with belief,” Williams writes in one poem. “We are less afraid of the dark / inside than of all the light,” he writes in another. Williams published poems from his book in more than forty journals, including the five below. 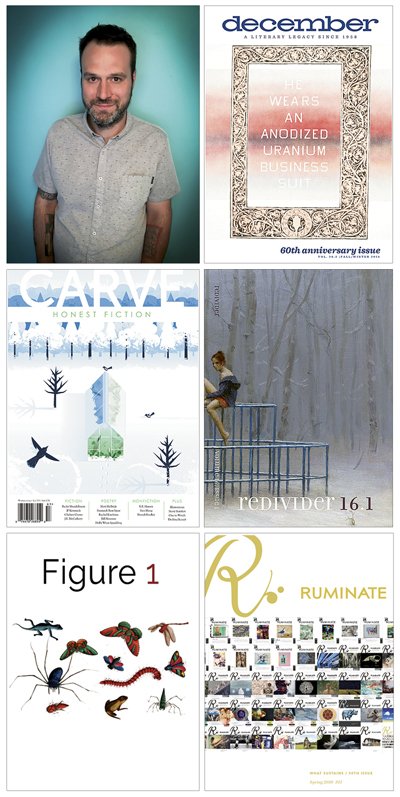 Williams appreciates literary magazines that create community, including print biannual december. “The editors support and promote their authors with vigor and a genuine affection that proves there are real, loving human beings at the helm,” he says. Editor Gianna Jacobson, who revived the journal in 2013 after a thirty-two year hiatus, agrees. “We’re not a place where writers just send their work and we say yes or no and once the transaction is done, we’re done with each other,” she says. The editors provide feedback on at least half of their submissions and work to stay connected with their contributors; Williams has published work in december several times and even collaborated with staff to organize a reading in Portland, Oregon. Edited in Saint Louis, the journal features poetry, fiction, and nonfiction and is known for publishing great writers such as Raymond Carver early in their career. Submissions in all genres are open via Submittable or postal mail until May.

Speaking of Raymond Carver, Carve, which is named for the author, is a print quarterly that seeks to publish poetry, fiction, and nonfiction that can “challenge, heal, educate, disturb, and transform.” Williams published poems in the Spring 2017 and Winter 2018 issues of the magazine, which he admires for its bold mission. “Each poem and story in Carve simmers with hard-earned authenticity,” he says. “The editors don’t shy away from difficult subject matter or fresh perspectives, as long as every piece helps nourish a communal sense of empathy.” Editor Anna Zumbahlen adds, “We like to say we look for literary works with moments of catharsis and change.” Carve also hosts online writing classes and will publish its first anthology of stories and interviews later this spring. Writers may submit work in all genres year-round via Submittable and postal mail.

Williams published his poems “Three Ways to Feign Suicide” and “The Invention of Childhood” in Redivider, a journal he was drawn to because it seeks out underrepresented voices and, he says, supports “originality and experimentation as necessary to a fresh exploration of literature and our challenging, changing world.” Edited by graduate students at Emerson College in Boston, Redivider recently stopped print publication and relaunched as a biannual online journal. The magazine has published the work of many emerging and established poets and prose writers, including Ondrej Pazdírek, Safia Elhillo, and Steve Almond. Submissions are open year-round in all genres via Submittable.

“I found myself questioning not just my country, culture, and history, but nearly everything that defines me,” says Williams about writing As One Fire Consumes Another. “I struggled to faithfully explore the extent of my personal privilege as a white, cis, able-bodied male whose labors and strains are so trifling compared to others.” Poets Wendy Chen and Anna Mebel were quick to notice this self-interrogation in Williams’s poems, as well as his “precision of language and thought” and “sharp form and imagery,” and published two of his poems in their online poetry quarterly, Figure 1. Williams, in turn, was drawn to the journal’s “energetic, vibrant, and daring” approach. The editors launched the journal to “publish and give visibility to new and underrepresented poets and poems.” They add: “Poetry is an art form that is terribly conservative, but we’ve tricked ourselves into thinking that it’s politically radical. It’s an art form that’s heavily supported by institutions.” Submissions are open year-round via e-mail.

Founded by editor in chief Brianna Van Dyke in Fort Collins, Colorado, Ruminate is dedicated to helping its “community slow down, read deeply, and live more awake to ourselves and this world.” For Williams, who published his poems “Grace Notes” and “Dear Jonah” in the Fall and Winter 2017 issues, respectively, that mission is deeply felt. “The poems in Ruminate nourish me personally and creatively,” he says. “They are brimming with spirit and unvarnished beauty.” Poetry editor Kristin George Bagdanov praises the “delicately constrained form” and the “sonic logic” of his work. “We really like what Marie Howe says about poetry—that a poem is an ‘intimate utterance’ that ‘holds silence,’” she says. The print quarterly is open for submissions in poetry, fiction, and nonfiction year-round.