With her debut essay collection, Five Plots, Erica Trabold wanted to render in words the beauty of Nebraska, her home state. “I became quietly passionate about making my home feel just as beautiful to readers who had never been there,” she says. “I wanted to put readers on the ground and make them look closely at flowers and snowdrifts.” The collection, which was published in November by Seneca Review Books, brings Nebraska alive through lyrical and image-driven vignettes. The essays combine description, historical research, meditation, and personal anecdote to explore ideas of family, memory, and place. “Home, for me, had always been a complication, wrapped in happiness and hurt,” she writes. Trabold, who now lives in Portland, Oregon, published each of the book’s five essays in the journals featured below. 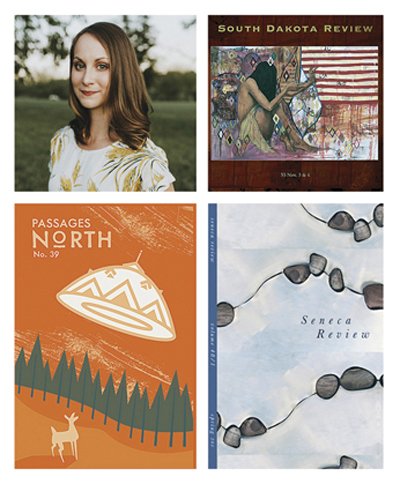 Clockwise from upper left: Erica Trabold, whose work has appeared in the South Dakota Review, Passages North, and Seneca Review.

The publication of Five Plots begins and ends with the Seneca Review. The title essay of Trabold’s book was published in the journal in 2013; five years later, her full-length collection was chosen as the inaugural winner of Seneca Review Books’s Deborah Tall Lyric Essay Book Prize. Edited at Hobart and William Smith Colleges in Geneva, New York, the biannual Seneca Review publishes works of poetry and nonfiction. “Seneca Review is the pinnacle of experimentation and form, the original home of what we’ve popularly come to understand as the lyric essay,” Trabold says. In the fall of 1997, Deborah Tall and John D’Agata, then the review’s editor and associate editor, respectively, began publishing what they called the lyric essay; the journal has since pioneered the form, having published lyric essays by Jenny Boully, Eula Biss, and Anne Carson, among many others. Submissions for the Seneca Review will open on February 15 via postal mail and Submittable; submissions for the second biennial Deborah Tall Lyric Essay Book Prize will open in the summer.

Trabold submitted to the Collagist because the online journal had “garnered a wonderful, years-long reputation as a place for experimental work” and because of its apt name. “Collage is a mode of making that my work often draws from,” she says. The piece Trabold published in the journal, “Canyoneering,” patches together the story of her father’s adoption with descriptions of canyons and caves. Published every two months, the Collagist publishes poetry, fiction, and nonfiction; submissions are open via Submittable until January 31 and will reopen on March 1.

When Trabold was looking to publish her essay “Borrow Pits,” which combines disparate narratives about a manmade lake in Nebraska, she knew it would need a home in a journal that was open to imagistic and experimental style. “It’s like a series of poems and thirty pages long,” she says about the piece. She eventually placed it in the annual print journal Passages North, which has a section devoted to hybrid work edited by Matthew Gavin Frank. Published at Northern Michigan University in Marquette, the journal celebrates its fortieth anniversary this year and is open for submissions in fiction until February 15 and in poetry, flash prose, nonfiction, and hybrid work until April 15.

As Trabold’s essays often meditate on change, it seems fitting that her piece “A List of Concerns,” about the author’s adolescence and shifting understanding of the Nebraska prairie, won the 2017 Payton James Freeman Essay Prize, which called for the theme “Change.” As part of the prize, cosponsored by Drake University, Trabold was published in the Rumpus, an online publication known for its daily output of poetry, fiction, nonfiction, criticism, comics, and interviews. In 2017, current editor in chief Marisa Siegel purchased the Rumpus with the goal of “giving a platform to those who might not otherwise find one and to publish work that challenges us to think outside binaries and beyond borders.” Siegel also hopes to adopt a flat-rate payment model for feature writers and book reviewers and to make the site more mobile-friendly. Submissions in fiction are open until January 31; submissions in essays will open March 1.

Trabold’s essay “Tracks” uses a single winter scene in the woods to explore the topics of motherhood and hunting. Since the essay is deeply rooted in the Midwestern landscape, Trabold wanted to publish the piece in a regional journal. “The landscape of my home is often underappreciated,” says Trabold, noting that people often stereotype the Midwest as flyover country. “I wondered if an editor from the Midwest would see the beauty I was trying to achieve for what it is.” She found the right home at the print quarterly South Dakota Review, which published her piece alongside poems by Twyla Hansen, the Nebraska State Poet at the time. “Everything about the situation felt right,” Trabold says. The journal, which is edited at the University of South Dakota in Vermillion, publishes poetry, fiction, nonfiction, mixed-genre, and translations and is open for submissions via Submittable until May 31.