In every story of Nana Kwame Adjei-Brenyah’s debut collection, Friday Black, characters confront the bleaker realities of American life—racism, consumerism, commodification of the body—and reckon with the consequences of these issues on our humanity. The stories in the collection, which will be published in October by Mariner Books, have a dystopian bent and are told with dark humor and a clear-eyed understanding of human failings. “People say ‘sell your soul’ like it’s easy,” says the narrator in one story. “But your soul is yours and it’s not for sale. Even if you try, it’ll still be there, waiting for you to remember it.” Adjei-Brenyah has published work in Printers Row, Gravel, and the five journals below. 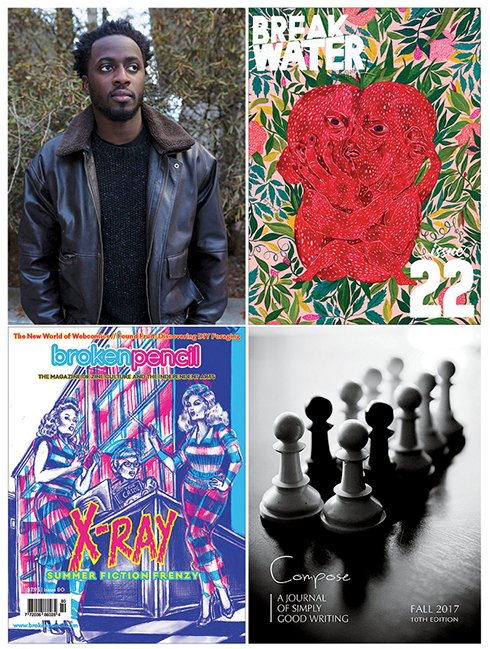 Several of Adjei-Brenyah’s stories take place in the mall—the book’s title is in part a riff on the shopping phenomenon known as Black Friday—and one such story, “In Retail,” was published in the online journal Compose: A Journal of Simply Good Writing. Managing editor Suzannah Windsor says the editors were struck immediately by Adjei-Brenyah’s “strong voice and great eye for unusual details.” In turn Adjei-Brenyah was drawn to the editors’ sincerity and transparency about the process. “I appreciate that and still do,” he says. “Journals that aren’t afraid to show some of their insides to remind you the people on that side of the editorial process are humans too.” In keeping with that transparency, the editors recently announced that the journal is on a brief hiatus due to personal and professional responsibilities such as publishing a book and having a child. They plan to reopen submissions in poetry, fiction, nonfiction, and art soon and will move from publishing two issues a year to publishing single pieces on a continual basis.

In 2013 Adjei-Brenyah published his first print piece in Broken Pencil, a Canadian magazine that publishes fiction, interviews, comics, art criticism, and zine reviews. Adjei-Brenyah published “Cardigan Blues” with the quarterly magazine after winning its annual Indie Writers’ Deathmatch, a tournament in which readers vote for a winning story, and writers can post on “particularly aggressive message boards,” says Adjei-Brenyah, to drum up support. Editor Jonathan Valelly describes the tournament as “chaotic and occasionally messy, which is what we think radical and groundbreaking fiction should be.” Broken Pencil recently started printing its issues in full color and is working to reach more cities across Canada to “empower local zine communities and nourish DIY arts.” General fiction submissions are open until September 15; submissions for this year’s Deathmatch open September 22.

“I was drawn to their simple design. Straight to the content,” says Adjei-Brenyah about the online journal Foliate Oak. “There’s something beautiful about presenting stories without much adornment.” Edited by undergraduate students at the University of Arkansas in Monticello, the journal is published monthly during the academic year and features poetry, fiction, nonfiction, and art. Adjei-Brenyah, who published a flash-fiction piece in Foliate Oak in 2014, notes that the publication takes flash fiction seriously. The journal is open for submissions via Submittable year-round, and the editors are particularly interested in flash fiction, non-rhyming poems, and “quirky writing that makes sense.”

“I love the diversity of the content Guernica publishes,” Adjei-Brenyah says about the online magazine dedicated to the intersection of art and politics. “I also love the way it seems to lean into the political. I believe art is inherently political, or at least it is a great privilege to be able to think of your art outside of any political landscape. I feel as though Guernica feels that way as well.” Established in 2004, Guernica publishes essays, art, poetry, and fiction by writers and artists from all over the world. Adjei-Brenyah’s “The Era,” published in April, depicts a dystopian future in which people’s personalities are genetically optimized, and those whose aren’t are derided and shunted to the edges of the city. Submissions are open in fiction and nonfiction; poetry submissions will open on September 15.

The sharp social insight of Adjei-Brenyah’s work calls to mind the work of  ZZ Packer, so it’s fitting that Packer chose his story “The Neon Guillotine” as the winner of the second annual fiction prize administered by the online journal Breakwater Review. Edited by the students at the University of Massachusetts in Boston’s MFA program, the journal publishes three issues of poetry, fiction, and nonfiction each year. The latest issue features stories by Terrance Wedin and Joey Hedger and poems from Holly Day, Lowell Jaeger, and Katie Brunero, among others. Submissions for the annual fiction award—which includes publication and a $1,000 prize—are open until December 15 with a $10 entry fee; free general submissions open September 1 via Submittable.