In her debut essay collection, Homing Instincts, Dionisia Morales takes on ideas of place and home. Framed by the day-to-day of Morales’s life—rock climbing, travel, pregnancy, moving from New York City to Oregon—the essays weave together research and meditations on the history of a place and how it can influence an individual’s sense of belonging and family. Morales published essays from the book, out in April from Oregon State University Press, in a number of journals, including the five listed below. Like Morales’s work, many of the publications are rooted in place and, as Morales writes in her book, “the tendencies of place—the expectations, values, and behaviors of where we live that evolve over time, and, with each generation, penetrate the soil that we walk, work, and crave.” 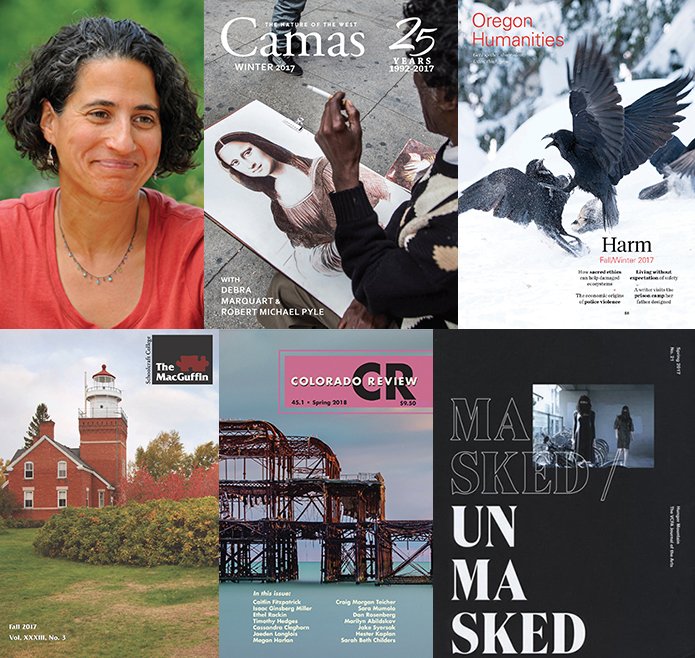 Dionisia Morales often writes about the landscape and values of the West Coast, making her work a good fit for Camas (camasmagazine.org), a print biannual that she says “wrestles with a wily concept—the nature of the West.” Edited by graduate students in the environmental studies program at the University of Montana in Missoula, the journal publishes poetry, fiction, nonfiction, and art. “The editorial staff interprets the idea of the West broadly, not limiting the work it publishes to landscapes and wildlife, but also leaning into the intangible personality traits of a region,” says Morales. The magazine, which has published many environmentally minded writers, including Ellen Meloy, Rick Bass, and Robert Michael Pyle, is open for submissions in all genres until March 30 via Submittable for the Summer 2018 issue, whose theme is Rivers.

Focused on a smaller, but no less complex, region of the American West, Oregon Humanities (oregonhumanities.org) publishes essays and articles by writers living in Oregon. Published online and in print three times a year, the magazine has “an inward- and outward-looking quality,” says Morales. “The result is a channeling of ideas that are relevant to national and international audiences but described through the voices of people who share a sense of place.” The Fall/Winter 2017 issue, which carries the theme of Harm, included a feature by Joe Whittle on how Columbia River tribes protected ecosystems, an essay by Jason Arias about being an EMT, and an essay by Alice Hardesty about visiting the World War II Japanese American internment camp her father helped design. Submissions by Oregonians will be open via e-mail later this month.

Named after the literary device or gimmick that triggers a plot, the MacGuffin (schoolcraft.edu/macguffin) is based at Schoolcraft College in Livonia, Michigan, and publishes poetry, fiction, nonfiction, and art. The journal originally published Morales’s essay “You Are Here,” about visiting Istria, a peninsula in the Adriatic Sea where Croatia, Italy, and Slovenia meet, which opens Morales’s collection and sets in motion one of the book’s primary concerns: the feeling of passing through and engaging with the historical and social layers of a place. Established in 1984, the MacGuffin is published in print three times a year. Submissions in all genres are open year-round via e-mail and post.

Morales credits journal editors for helping her improve pieces, including her essay “Home at the Heart,” which she revised twice with Stephanie G’Schwind, editor of the print triannual Colorado Review (coloradoreview.colostate.edu) before it was published. “Instead of rejecting the piece based on one faulty element, G’Schwind was invested in helping me rethink the section to bring the last sentences more squarely in line with the essay’s tension around language and communication,” says Morales. Established in 1956 and published at Colorado State University in Fort Collins, the journal publishes poetry, fiction, and nonfiction; recent issues have included poetry by Hala Alyan and Tyrone Williams, fiction by Kristen Roupenian—the author of the viral New Yorker story “Cat Person”—and nonfiction by Jennifer Itell and Clint McCown. Poetry and fiction submissions are open via Submittable or post until April 30; nonfiction submissions are open year-round.

Though two of the essays in her collection feature “quietly unconventional elements—seeing pregnancy through the lens of rock climbing, thinking that houses have personalities—that didn’t resonate with editors of other publications,” Morales eventually found a home for both pieces at Hunger Mountain (hungermtn.org), an annual print publication with an “eclecticism that invites writers and readers to assume a level of adventure,” she says. Located at Vermont College of Fine Arts, the journal publishes poetry, prose, visual art, young adult and children’s writing, and other literary miscellany. It also publishes an online companion, Ephemeral Artery, which includes selections from the print magazine along with book reviews, interviews, and craft essays. The 2018 issue of Hunger Mountain, themed Everyday Chimeras, comes out this month and was guest-edited by Donika Kelly in poetry, Melissa Febos in prose, and Ibi Zoboi in children’s literature. Submissions in all genres for the 2019 issue will open via Submittable on May 1 and close October 15.