In the second poetry collection by Laura Da’, Instruments of the True Measure, out this month from the University of Arizona Press, the history of the Shawnee comes into focus. Da’, who is Eastern Shawnee, portrays life on the American frontier during the early nineteenth century through concise and concentrated images and speaks candidly about the violence European settlers inflicted on Indigenous people in America. “Any treaty is an artifact of unimaginable suffering,” she writes. With precise, visceral language (“salt-lick deer / split-hung / over the saddle’s pommel”) Da’ gestures at how violence and history can live in the land and body for generations. She has published poems in the journals below, as well as in Poetry Northwest, Eleven Eleven, and Blackbird, among others. 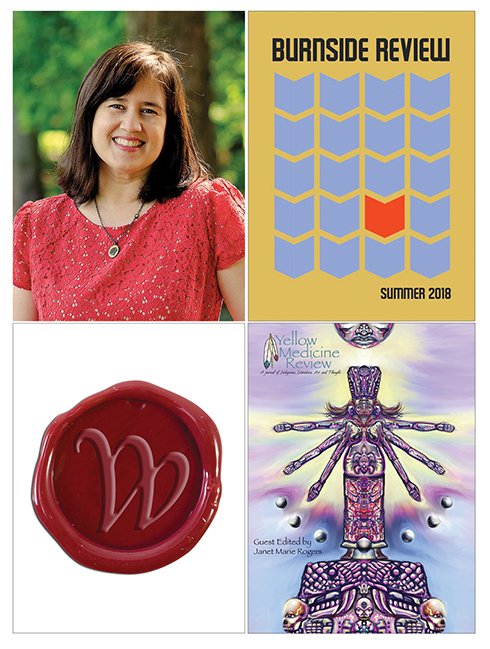 “I generally try to submit work to journals with an eye to building community as a writer,” says Da’, who lives in the Pacific Northwest. She found such a community at the Burnside Review, a print annual edited in Portland, Oregon. “I see it as a clear artifact of the Northwest writing community: elegantly lyrical, connected to a strong and singular sense of place, and engaged in seeking multiple narratives.” Her description also applies to the poem Da’ published in the journal: “Eating the Turtle” contrasts the story of “favored men” growing fat on “buttered meat, / stone-fruit sweet,” with a group of men with “attenuated bodies” catching and eating a turtle from the Delaware River. Burnside Review, which formerly published poetry and fiction, now focuses on poetry; recent contributors include Yu-Han Chao, Lisa Lewis, José Vadi, and James Haug. Submissions will open in January.

Da’ was drawn to the online journal Toe Good as a “fresh and innovative source for Indigenous writing.” In 2014 Da’ published her poem “First Ranges” in the journal; the piece weaves together images of migrating herds, boats on a river, and surveying tools—a major theme of Instruments of the True Measure is the “colonial impulse to survey, measure, and possess territory.” Jerry Bruno, a poet and Toe Good’s cofounder and “supreme chancellor,” says the editors were eager to publish Da’ and help her gain even more recognition in the field. Bruno says the journal seeks to publish “other stream” writers—young writers seeking a publication credential or who have published work with only small, unrecognizable presses. The journal publishes work continually online and has recently featured work by Ashley Parker Owens and James Croal Jackson. Submissions of poetry, fiction, art, reviews, and interviews will open on January 1.

Da’ calls the print biannual Yellow Medicine Review the “honored elder of literary journals…a singular and necessary institution.” Writer Judy Wilson established the journal in 2007 as a space dedicated to writing and art by Indigenous people. “Flowing through southwest Minnesota is the Yellow Medicine River, where the Dakota came together to dig the yellow root of a plant used for medicinal purposes,” she says. “Such is the spirit of Yellow Medicine Review in providing a platform for the Indigenous perspective, in part to make possible the healing of an old but open wound—the persistent stereotyping of Indigenous peoples—in part to empower voices too often left unheard, to promote cultural awareness, and to bear witness to what still lives in the memory of Indigenous people.” For each issue of Yellow Medicine Review, Wilson selects a guest editor, who looks for both established and emerging writers of poetry, fiction, nonfiction, playwriting, and scholarly essays or reviews. The Spring 2019 issue will be edited by poets Millissa Kingbird and Angie C. Trudell Vasquez, who will post a call for submissions in mid-November.

Da’ writes poetry rooted in place, an element that got the attention of W. Todd Kaneko, who published two poems by Da’ in the online journal Waxwing, which he coedits with Justin Bigos and Erin Stalcup. “Something I really dig about the poems by Laura Da’ is the generosity with which the poems give the reader a glimpse of the world her speaker lives in,” Kaneko says. “There is some beautiful imagery that is quietly strange and softly violent. Da’ has this way of transporting us into this new place....” Waxwing, which publishes poetry, fiction, nonfiction, and translation, is committed to broadcasting the multicultural and multinational work of America and “hearing these voices together, in all their harmony and dissonance.” Da’ notes that the triannual journal has an “uncanny crystal-ball clairvoyance when it comes to introducing new writing that I will fall hard for and seek out with avidity for years to come.” Waxwing is currently open for submissions of all genres, including cover art.