The spare, lyric poems in Andrea Cohen’s sixth collection, Nightshade, published by Four Way Books in September, play with dualities such as bitter and sweet, absence and presence, and silence and speaking. The title poem goes: “It trades in / poison and // in balms. We / call it bitter- // sweet—what / living isn’t?” Aphoristic and witty, Cohen’s poems—some as short as four words—address loss and intimacy. “The disarming playfulness of her linguistic surface leads to the seriousness of her truths,” says Salamander editor Jenny Barber. Cohen has published poems in Salamander and more than twenty other periodicals, including the New Yorker, Poetry, the Atlantic, the Kenyon Review, and the journals listed below. 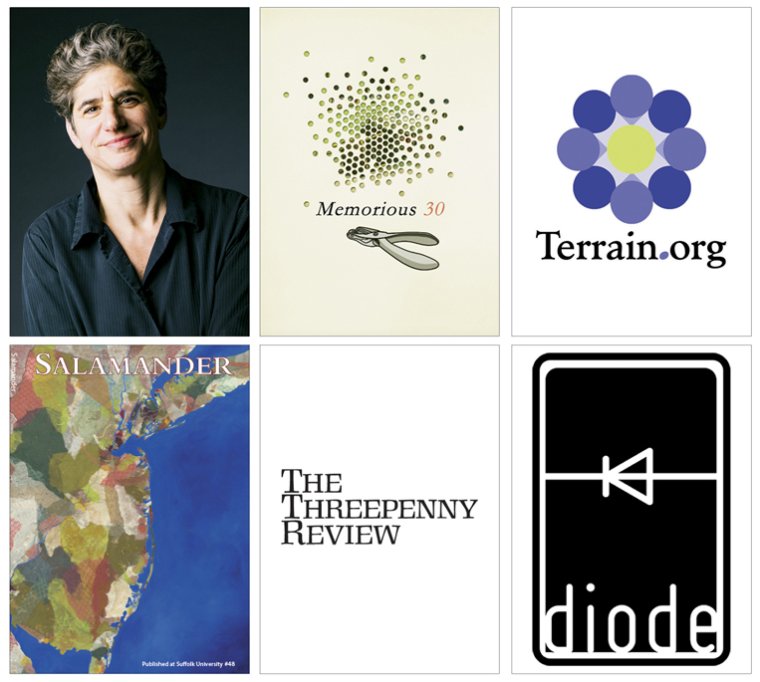 “When it comes to journals, it’s really all about the editors,” Cohen says. “I can’t overstate the importance of finding editors who believe in your work and help, over the years, to bring readers to it.” Cohen found such an editor in Rebecca Morgan Frank of the online biannual Memorious. Frank published Cohen’s work in Issues 1, 8, 15, and 26. “Literary editing has always been an investment in literary community: We need one another,” says Frank, who started the journal with Robert Arnold and Brian Green fifteen years ago, when she was an up-and-coming poet herself, and has since worked to publish poetry and fiction that bridges generations. In the latest issue, for example, Frank published emerging poets Jos Charles and Molly McCully Brown alongside established poets such as Amy Gerstler. Looking ahead Frank hopes to find an institutional home, preferably a low-residency MFA program, for Memorious. Submissions in all genres will open in January 2020.

Cohen describes the online literary and technical journal Terrain.org as an “ambitious mix of literary genres and photography.” Established in 1997, Terrain.org is focused on place and publishes poetry, fiction, nonfiction, and art along with essays by doctoral students in the sciences, case studies, articles, and editorials. Editor in chief Simmons Buntin says the variety of pieces “provide mutually beneficial perspectives and insight on a common goal, which is creating more livable communities in the context of a resilient and biodiverse world.” Cohen singles out one of the journal’s initiatives, the Letter to America series, which features more than 160 letters containing prose and poetry from writers, scientists, politicians, and thinkers, written to the nation after the 2016 presidential election. In March, Trinity University Press will publish an anthology of the letters, including a poem by Cohen. Journal submissions in all genres will open on September 3.

Cohen, who directs the Writers House at Merrimack College and the Blacksmith House Poetry Series in Cambridge, Massachusetts, says that Jenny Barber, the founding editor of Salamander has been, “in her modest manner, central to the Boston poetry world.” Barber, who started the print biannual in 1992, has worked to publish both established writers and writers “who’ve reached artistic maturity and deserve a wider audience.” She recently passed the torch to poet José Angel Araguz, who started as editor in chief in July. Edited at Suffolk University, Salamander publishes poetry, fiction, nonfiction, translation, book reviews, and art. Barber says the editors want to share work that, like Cohen’s, has a transformative effect on the reader. “Andrea’s poems bend and refract reality in surprising ways,” says Barber. “I often want to laugh and cry at the same time: Her verbal wit is matched by her ability to render personal loss—that of family members, love relationships—and recent history with depth and precision.” Submissions in all genres open October 1.

“I love everything about the Threepenny Review: the poems, the photography, the fiction, the eloquent range and depth of the nonfiction, and the newspaper-like format,” says Cohen, who credits the review’s quality to its editor, Wendy Lesser. In 1980 Lesser started the Threepenny Review, now a highly respected journal of literary and cultural criticism, poetry, fiction, and nonfiction with a circulation of more than six thousand, in Berkeley, California. The Summer 2019 issue includes poems by Charles Simic and Dean Young, fiction by Medardo Fraile, and criticism by Javier Marías. Submissions open in January 2020.

Cohen published four poems from Nightshade in the online poetry journal Diode, edited by poet Patty Paine. “I am partial to the understated design of the online journal, the beauty of the Diode Editions books, and the stellar poems that Patty and her colleagues publish,” Cohen says. Paine, in turn, is a fan of Cohen’s work and has published the poet multiple times in the journal, including when she ran poems Bob Hicok and Cohen had written for each other in Issue 7.1. (“Andrea Cohen, you’re a good egg,” wrote Hicok; Cohen replied: “…Bob likes his autumn / shaken and stirred, he likes it / with a side of blizzard….”) Submissions to Diode are open year-round.

The essayist on the journals that published essays from her debut collection, When You Learn the Alphabet.