I wrote the book to tell the stories of my people and my community in the American West,” says Kali Fajardo-Anstine about her debut story collection, Sabrina & Corina (One World, April). “I come from a storytelling tradition, and the urge to explore my obsessions as they relate to place, violence against women, feminism, and family through story is something I inherited from a long line of artists and storytellers in the Southwest.” Fajardo-Anstine’s stories revolve around family relationships and depict Chicana and Indigenous women coping with abandonment, abuse, economic hardship, and illness. “I wanted a realist depiction of Colorado Chicanas,” she says. “And I wanted our Indigenous land to be explored from a feminine perspective.” Below are five journals that have published Fajardo-Anstine’s stories. 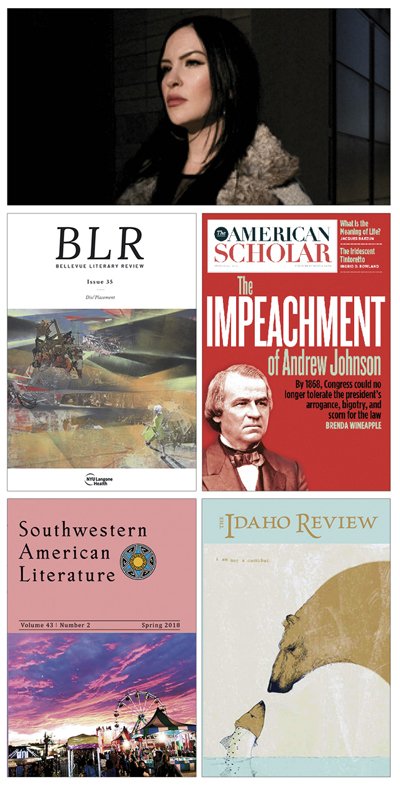 “For many of us the American West isn’t west at all, but our center, our beginning, our end,” Fajardo-Anstine says, and she tries to convey that perspective in her stories. When submitting them for publication, she received more acceptances from regional magazines than from “traditional pathways of the East.” After nearly twenty journals had rejected her story “Sugar Babies,” for instance, Fajardo-Anstine found a home for it in the print biannual Southwestern American Literature. Edited at the Center for the Study of the Southwest at Texas State University in San Marcos, the journal publishes poetry, fiction, literary criticism, and book reviews related to the Southwest. Since its inception in 1971, the journal has published writers such as Terry Tempest Williams, Jennifer Givhan, and Simon Ortiz. Poetry, fiction, and nonfiction submissions are considered year-round via Submittable.

Fajardo-Anstine’s title story, which depicts a young woman dealing with the murder of her cousin, was also rejected by about twenty journals before the Idaho Review picked it up in 2014. The print annual, edited by Mitch Wieland and the faculty and students at Boise State University’s MFA program, has a history of publishing the early stories of many successful writers such as Jennifer Haigh and Benjamin Percy, plus work by heavy-hitters including Edith Pearlman, Joy Williams, and Rick Bass. Submissions in poetry, fiction, and nonfiction will open in the fall.

Fajardo-Anstine’s appearance in the Idaho Review led to her publication in the American Scholar, a quarterly magazine that primarily covers public affairs, science, history, and culture but also publishes poetry and fiction. Shortly after her Idaho Review story was published, Fajardo-Anstine met one of her literary idols, Ann Beattie, and mentioned to her that they had both appeared in a recent issue of the Boise State journal. Beattie read Fajardo-Anstine’s story and then invited her to submit to the American Scholar, where Beattie serves as fiction editor. Although the first story Fajardo-Anstine sent was turned down, a year later she submitted “All Her Names,” which was accepted for the magazine’s Summer 2016 issue. Published by the Phi Beta Kappa Society in Washington, D.C., the American Scholar has run work by some of the most notable writers, scholars, and scientists of the past century, including Hannah Arendt, Albert Einstein, and Helen Vendler. The journal does not accept unsolicited submissions in poetry or fiction; article and essay submissions are open year-round via Submittable.

When looking to place her story “Remedies,” which incorporates elements of Southwestern herbal healing and natural medicine, Fajardo-Anstine was delighted to discover Bellevue Literary Review, a journal publishing poetry, fiction, and nonfiction that “examines human existence through the prism of health and healing, illness and disease.” Founded in 2000 by physician-writers and published twice a year by the Division of Medical Humanities at the New York University School of Medicine, the journal welcomes both emerging and established writers. “I wasn’t sure if the editors would look twice at a young writer like me,” says Fajardo-Anstine. “But fiction editor Suzanne McConnell accepted my story and edited with a keen eye and open heart.” Bellevue Literary Review is open for submissions in all genres year-round except for July and August; the journal’s annual contest, which awards publication and $1,000 each to a group of poems, a story, and an essay, is open via Submittable until July 1.

In 2010 Fajardo-Anstine published “The Mixed Girls’ Guide to ‘What Are You?’” in the Acentos Review, an online quarterly that publishes poetry, fiction, nonfiction, translation, interviews, and art by Latinx writers and artists. Editor Raina J. León accepted the story and, according to Fajardo-Anstine, embraced its “themes of identity, the tongue-in-cheek tone, and the almost subversive way I was dissecting the different facts of my mixed-race Chicana identity.” Established in 2008, the journal publishes work in English, Spanish, and Portuguese by Latinx writers from all over the world. The editors read submissions in all genres year-round.