The history of writers who have found an outlet for inspiration in the visual arts is long and well documented. Many of the greatest names in literature—from Blake to Dostoevsky, Faulkner to Proust, Kafka to Updike—made drawings or paintings as well as put words on paper. But there are many kinds of artistic expression that complement the art of writing. The five authors profiled here have found inspiration in other crea-tive endeavors—cooking, photography, book-making, and, yes, painting and drawing—that feed their literary appetites while continually pushing them to explore and expand their ideas about art. 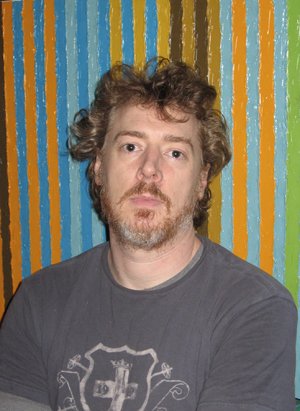 Michael Kimball is the author of three novels, an amateur painter, a documentary filmmaker, and a blogger who lives with his wife in Baltimore and works as a freelance editor. He began painting after reading an article about one of his favorite painters in the New Yorker and ever since then has used it as a way to enhance and sometimes work through issues that crop up in his writing. His third book, Dear Everybody (Alma Books, 2008), a novel written mostly as a series of letters by the narrator, who has committed suicide, was published in the United States, the United Kingdom, and Canada; his novel The Way the Family Got Away (Four Walls Eight Windows, 2000) has been translated into five languages. For his ongoing blog, Michael Kimball Writes Your Life Story (on a Postcard), he regularly interviews people from around the world and condenses their life stories to postcard length.

Why did you begin painting?
I read an article about [abstract painter] Barnett Newman and was fascinated by the way he talked about his painting. It seemed like a metaphor for reading and writing to me. I had all of this scrap wood in the back of our house and a bunch of leftover latex paint, so I just tried it and kept going from there.

What type of painting do you do and when do you do it?
It's mostly abstract expressionist stuff. I like a lot of the early abstract expressionists—Newman, [Mark] Rothko, Hans Hofmann, and some painters today like Mary Heilmann, Sean Scully. I often will paint when I'm stuck with a piece of writing and think about how they created effects, how they used shape, color, line, texture to create not just the image, but a sense of feeling.

Do you paint as you're writing or as you're revising?
It's kind of a continuous thing. Dear Everybody is made up of about four hundred little pieces—a lot of letters from the main narrator, but there are also diary pieces and newspaper articles. At the same time, I was working on a painting that's made up of 225 squares of different colors, and thinking how to piece all the text together wasn't unlike thinking about how to piece together all those squares. Sean Scully does some paintings that look like tic-tac-toe figures.... He has paintings within paintings where you can see he built a canvas around another canvas. Structurally, this sort of fit with how I was thinking about Dear Everybody.

How would you describe your creative process?
I generally start with an image, a little bit, a sentence or a feeling. I don't plan it out, I don't have a plot, I don't think about characters so much. I just have this little thing that I start with and see where the narrator takes it. I try and figure it out as I go. Every day is trying to get some number of words down and the next day is going back and revising those and taking it a little further. Painting is a lot the same way. I may start with some form or some set of colors, but I keep working it over and over, and so it becomes layered. My writing involves a lot of revision. I rework things endlessly. The paintings I'm happier with are the ones I've reworked a lot.

Are there certain periods in which you dedicate more time to painting or writing?
There are periods when I've finished a draft of a novel and I don't want to start again. I want to get a little time away from it. I paint more often when I'm really stuck with something, when the fiction isn't working—the time at the keyboard isn't fixing what's wrong with the fiction, and that's when I walk away and try not thinking about it explicitly. And when I come back to the fiction, often there's a solution.

Do you ever feel pulled between the painting and the writing?
Every once in a while that happens, but I've kept the painting separate. The writing becomes public. The paintings almost no one has ever seen unless they come to my house or to the house of someone I've given one of the paintings to. And so it's more private in a sense. It's just a thing I do on my own without any other worry.

What inspired you to do the life story project?
I'd written a bunch of them at a performance art festival. People would sit down and I would interview them in about five minutes and ask them the highlights of their life and what mattered most to them, what they wanted to do, those sorts of things and they would tell me and I would write it on the spot for them right there. It was one of the strangest experiences I ever had as a writer. I was really moved by what and how much people told me. A week after I did the first bunch at the festival, one of the people got in touch with me and said that I had taken a dark and difficult time in her life and made it something manageable. She said it was a kind of postcard therapy. It sort of broke my heart. Once the blog started, I started getting requests from all over and it really just grew in a surprising way. I've written almost two hundred of them now.

Have these projects helped to market your fiction?
The painting doesn't at all since it's something I do and hang on my wall. The postcard project accidentally turned into the best publicity I could have done. A lot of people came to the blog because of that. It wasn't a plan and I don't think I could think of something like that if I tried for that purpose. It just happened.

Is there some way in which all your projects come together for you as a writer?
I like to make things. I'm happiest when I'm making things. I have found that I can't write all the time. If I were to write fiction even eight hours a day, I would be exhausted. But I've found by doing different things, I can do a lot more. By thinking about a problem with one particular art form it pushes me to think about another art form.