Jen Bervin is a poet and visual artist whose work is inspired by language and books. Her poetry books include Under What Is Not Under (Potes & Poets Press, 2000), Nets (Ugly Duckling Presse, 2004), A Non-Breaking Space (Ugly Duckling Presse, 2005), and The Desert (Granary Books, 2008), an erasure poem machine sewn with over five thousand yards of pale blue thread. It was released in forty artist-book editions, which sell for four thousand dollars each. Her visual installation The Dickinson Fascicles was constructed on eight-by-six-foot quilts and reveals the patterns that formed when the stray crosses and lines from Emily Dickinson's original manuscripts—marks later removed by editors of her poems—are presented intact. She's an editor-at-large for Jubilat, and splits her time between New York City and Seattle. 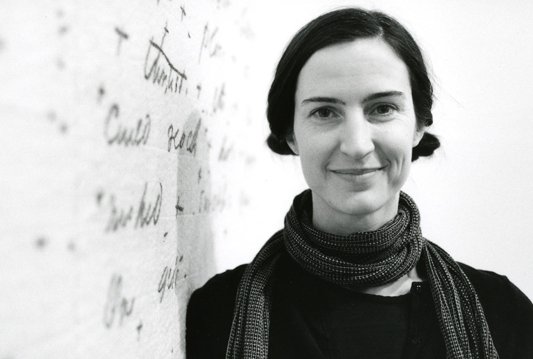 Tell me about how you first became a poet and a visual artist. What first inspired you?
I started out as a visual artist. I had finished my BFA at the School of the Art Institute of Chicago when I started most seriously getting involved in poetry. I'd been a reader prior to that, but I started to feel as if a lot of the work I was making was pointing toward that form of expression. I needed to understand better how to write poems to understand what I was doing in my visual art.

What is your creative process as a poet?
It's different with every book, but everything I do takes a long, long time. A lot of the editing happens over many, many passes, and a piece or a poem accrues over a long span of time too. That might be concurrent with a visual project or an interdisciplinary project. I usually have maybe three or four sort of big-flow things going at a time.

Tell me about The Desert.
The first chapter of The Desert was composed as an occasional poem. I was invited on the Wave Books Poetry Bus Tour, and one of the readings was at Roden Crater. James Turrell's piece in Arizona is a major artwork inside a giant crater. It's very rare to have access to it. And I wanted to write a poem both to thank them for the invitation to see it and also to honor Turrell.

I was in France before that tour and was working on the Dickinson quilts and had a borrowed sewing machine that could do a zigzag stitch. I [usually] use really old sewing machines that basically go straight forward. So it was a new option that I had available. Also Joshua Beckman, who was one of the organizers of the tour, had done a book called There Is an Ocean, which I love, so I thought about composing a poem using his method of zigzag stitching over the words.

I tried that first chapter, and it had its own life. When I got going with the book, all the future drafts I did were sewn drafts. It was important to me in writing the poem that the composition process deeply affect the writing of it, so I didn't want to cross out, to work in a mode other than the one I was "writing in." I think there are three or four drafts. Some chapters were redrafted more than that. That happened pretty intensively. I did 130 pages of the book through multiple drafts.

It takes a long time to write a poem, let alone sew one. How does it feel as a writer to add that extra challenge to the process?
I feel every writer spends that much time writing a book; it's just more manifest in The Desert. They might not spend sixteen hundred hours sewing or printing their book, but I think most writers spend that much time writing. It just doesn't look like it when the book is published.

What do you gain as a poet by using this technique?
With that technique in particular, I made rules for myself. Like if I sewed over a word, I didn't get to take it back. So when I was composing the poem, I had to stay very, very present as a reader and as a writer when I was sewing, because I would lose a possibility really quickly. The machine would just go right over a phrase and I didn't have that option anymore. It became a real exercise in attention in that sense. I couldn't not pay attention and have the best possibilities for the poem even though it was a mechanical process.

Is there any overlap among your projects? Has one inspired the other?
There's a lot of overlap. I've been working on a scale model of the Mississippi River. It's hand sewn in sequence, and when it's finished it will be close to three hundred feet long. I started that in 2006 while I was still working on the quilts, before I wrote The Desert. Since then I've written another book called "The Niagara Book" and another chapbook called "You Are Vast Unto Others." I think in all of those works the river is present. Not in the quilts, but in The Desert there's a chapter called "The Silent River." There's a poem I wrote called "Phoenix" that's very much about the hanging water. In "The Niagara Book" there's a lot of reference to the river. The practices rarely separate themselves out. The river looks separate but it's not separate. And the poems, even when they're just words on a page, look separate but they're not.

How does the time you spend making visual artwork compare with the time you spend writing poetry?
It moves back and forth a bit. For example, in August when I was working on the river at a residency, I listened to poetry all day long. So if you're listening to Ovid day in and day out while you're sewing, it's not like you're not doing poetry. If you're memorizing, listening, then reading and trying to recite another poet's work, you're still actively engaged; it's just a different kind of engagement.

How do you think the life of an artist who writes and is also immersed in another art form compares with that of a writer who only writes?
The one thing I'd say is I think how I conceive of a project and its boundaries or lack of limitations is really specific to visual-art training and to artist books; they're both super wide open in terms of how formally things are framed. You can have that within a very traditional collection of poems too, but I think as writers the forms are very codified: There's the short form, the broadside, and the slightly longer form, the chapbook, and then there's the sixty-five-page collection. If I could only think of the work I'm doing in those terms, it would be a very different experience. I don't think I would fit as a poet, if those were my only avenues. I guess I feel delimited.

A lot of writers have a hard time sitting down to write. Does expressing yourself in all these different avenues help with discipline as a writer as well?
I think it comes out of just loving, really loving, what you're doing. It doesn't feel like discipline. It just feels like getting to do the things you want to do most.

Suzanne Pettypiece is the managing editor of Poets & Writers Magazine.