Jesse Ball is the author of the poetry collection March Book (Grove Press, 2004) and two novels, The Way Through Doors (Vintage, 2009) and Samedi the Deafness (Vintage, 2007). He was awarded the 2008 Plimpton Prize for his story "The Early Deaths of Lubeck, Brennan, Harp, and Carr," and a book of poetry and prose, The Village on Horseback, is forthcoming in 2010 from Milkweed Editions. Ball also has illustrated books. He and his wife, Icelandic poet Thordis Björnsdottir, coauthored The Disastrous Tale of Vera and Linus, a haunting story about a sinister couple, which features sketches by Ball and was published by the Icelandic press Nýhil in 2006. He also illustrated Björnsdottir's book of poetry Og svo kom nóttin (And Then Came the Night), published by Nýhil in 2006. He teaches unconventionally themed creative writing courses—some of which explore such topics as walking and lying—at the School of the Art Institute of Chicago. 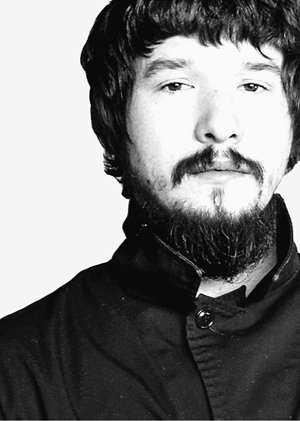 Did you start drawing before or after you began writing?
I've always done a lot of drawing. Even as a very small child I did lots of drawing. I drew monsters—sort of spiky monster guys with little legs and arms. At that time I decided I was going to write a letter to the Queen of England, so I did. The contents of the letter was mostly drawings of monsters. A year passed and I got a reply from the lady-in-waiting to the Queen saying that the Queen liked the monsters very much. I consider her my first patron, and that gave me the encouragement I needed. Despite years of discouragement thereafter, nobody could stop me from drawing, because the Queen told me it was fine.

Drawing is something I do, in terms of the writing, because I feel like the drawings give another indication of the situation of the work, and that can help people understand my work better. But I make no claims to be a good artist.

Do any of your drawings or writings inspire one another?
I wouldn't say that I've ever written something from a drawing, but I think for me the drawing is closely linked to handwriting, which is a very important thing for me. There are some people, like Rudolf Steiner—you know, the guy who did the Waldorf education system? He has a lot of stuff on handwriting and how a person should develop it. I like to keep journals, so I'm always thinking about my handwriting and changing it through the years and stealing new ways of doing letters from people that I like. I think the drawing and the handwriting are very linked because as my handwriting changes, my drawing also changes.

Does concentrating on the handwriting tie into your discipline as a writer?
Every way in which you can examine your practice and heighten it and move forward with it gives energy to the whole rest of your practice. So a small thing like changing the handwriting ends up easing the way toward other things.

How do feel about your drawings appearing in published books, if you don't consider yourself a good artist?
I'm very fond of the guys that I've made. But their purpose is less for someone to look at them and think, "This is so magnificent," and more to get a feeling of that drawing's position and representational space and what it's intended to do. From that person's sense of the position of a drawing, they can apply it to many other things within the work and get a vector of the work.

You write novels in a concentrated time period. How do you fill the voids between writing spurts?
I have a journal that I keep. I write things down. An example: I'm walking down the street and out of the corner of my eye I see somebody wearing pajamas and running around with a really large carrot; I get excited and write down "man with pajamas, carrot." By and large that's the writing process that goes on in between books. I believe that writing is a product of the perception you evolve as a writer.

As a writer do you feel like you have to be in a certain place to accomplish this?
I really like cafés in a country where my speaking of the language is bad enough that I have to concentrate [to understand it], so then you get this pleasant din of voices around you and you can write unfettered.

How does your teaching at the Art Institute of Chicago tie in?
In my teaching I try to get into people's practice and help rearrange it in a way that creates more work. Usually what stops writers from writing is some kind of poorly laid-out practice that causes them to get tired really quickly—to not want to write. You could be a great writer but if you don't have it orchestrated so that you want to write, then you're not going to produce anything.

While you were in college at Vassar you assembled your books and distributed them yourself.
When you write you don't want to surrender to a publishing company the moment when a book is judged to be a book or not a book. You decide if it's a book or not a book, no one else does. That's your prerogative as the writer. If you imagine yourself in a postapocalyptic world where—somehow you managed to survive—you're in this log cabin and there's a little printing press there, you're writing these books. You produce a book. Then it's a book. You just made a book. That kind of agency you want to have always. Whether you're in a postapocalyptic cabin or in your life now. You should never surrender that.

In terms of giving the manuscript out as a little book to people, for poets of the sixteenth and seventeenth centuries sometimes their audience was just the few friends they managed to pass the book out to. You're no less a writer. As soon as someone makes a book and gives it to someone else, that's the whole thing. There isn't anything to be added to it.