What makes your organization and its programs unique?
The mission of Casa Libre en la Solana is to support and enhance the creativity of professional and novice writers by providing a community venue for classes, readings, and other professional development opportunities.

The diversity of our programs and high level of community involvement is what makes Casa Libre stand out. In addition to our own creative writing workshops and reading/performance series, we provide an event base for many other Tucson groups, including Kore Press, Queer People of Color, Pan Left Productions, Read Between the Bars, and the Tucson Youth Poetry Slam.

What recent program have you been especially proud of?
Participants in our program Made for Flight, a transgender youth and ally empowerment workshop series, walked in the annual All Souls Procession in Tucson, a huge community procession to honor the lives of ancestors and loved ones who have passed away.

Made for Flight incorporates transgender history, ally development, creative writing, and kite building to commemorate the lives of the transgender individuals who have been murdered in the last year. TC Tolbert, Casa Libre’s assistant director, began this program three years ago, and this year we had approximately one hundred people show up to help us carry the kites that Tucson youth created in the procession.

It is inspiring to see the large number of allies who show up to lend their support to bringing awareness to the disproportionate number of transgender people (specifically women of color) who are murdered each year. 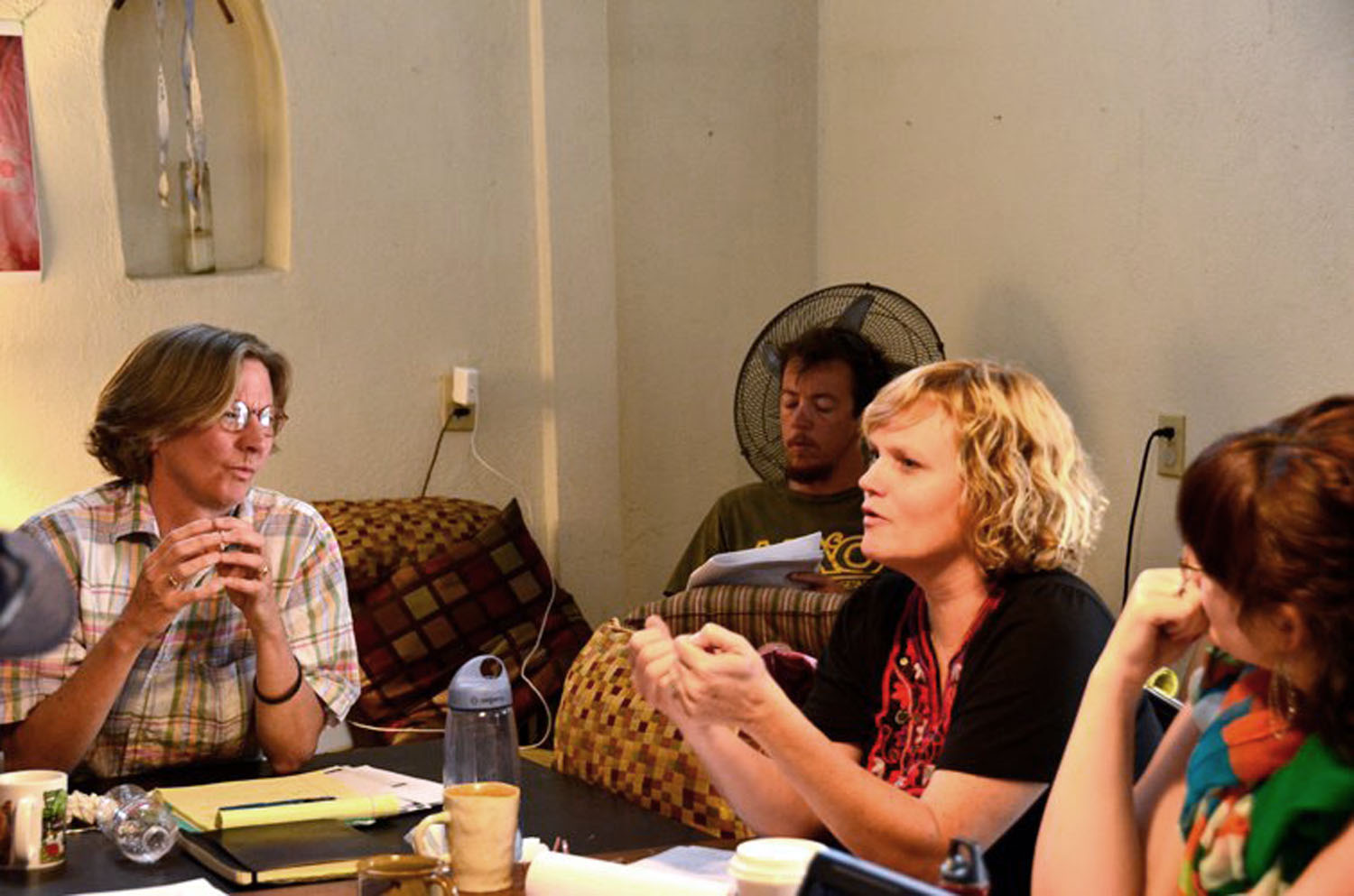 How do you find and invite writers?
Our organizational structure is a bit like an octopus. Each arm functions independently and in collaboration with the main body of the organization. Each of our programs is curated by a different local writer drawing from a diverse group.

I curate our Weekend Residency programs and through personal or professional connections have invited Camille Dungy, Samuel Ace, Maureen Seaton, and most recently Rebecca Brown to lead a weekend full of workshops and reading series. All of these Weekend Residencies could not have happened without the generous funding provided by Poets & Writers.

How has literary presenting informed your life and writing?
Casa Libre is my life. I live on the grounds in a community of seven households of writers and artists. Since I founded this place nine years ago, the programs and people who are a part of it have shaped who I am. This community is full of thinkers and creators. Every day there are conversations in our courtyards about writing projects, creative inspiration, and new programs. The Casa Libre community extends far beyond our grounds into Tucson and across the country. Passionate people who care about writing and creating come here. This is a nourishing place that I am proud to be a part of and call home.

What do you consider to be the value of literary programs for your community?
The staff and board members of Casa Libre are deeply invested in fostering creativity. We are devoted to honoring and making space for thinking, writing, conversation, art-making, and performance in a world dearly in need of artistic vision, creative solutions, and celebration of the human mind. Because we believe expression is a vital part of nourishing the human spirit, Casa Libre inspires writers and artists to take risks and manifest their artistic dreams.

Photo: Kristen E. Nelson. Credit: Sarah Dalby. Photo: Casa Libre's Weekend Residency with Rebecca Brown (at left). Credit: Samuel Ace.
Support for Readings/Workshops events in Tucson is provided by an endowment established with generous contributions from the Poets & Writers Board of Directors and others. Additional support comes from the Friends of Poets & Writers.

In the January/February 2013 issue of Poets & Writers Magazine, memoirist Debra Gwartney offers guidance on how to write about traumatic experience. "When the action is hot, write cool," Gwartney says. "Stand back. Let your prose breathe. Don't try to convince the reader to feel a certain way—avoid yanking on the easy emotion. Instead, trust the language you've selected, the images you've constructed, the relevant detail, and give the reader plenty of room to reach the feeling independently." Write an essay about a traumatic experience from your life or the life of someone close to you, following Gwartney's advice.

by
Staff
News and Trends
January/February 2013

With so many good books being published every month, some literary titles worth exploring can get lost in the stacks. Page One offers the first lines of a dozen recently released books, including Adam Mansbach's Rage Is Back and Yoko Ogawa's Revenge, as the starting point for a closer look at these new and noteworthy titles.

Choose a subject that has cultural currency: consumerism, American decline, Internet overload, trends in pop culture, celebrity fascination; take a position on it; and write an essay that explores that position. Read Christy Rampole's New York Times essay "How to Live Without Irony" as an example. For more examples, read Best American Essays Series editor Robert Atwan's "The Top 10 Essays Since 1950" in Publishers Weekly.

Write a scene about a very specific experience using only sensory imagery to describe what happened. For instance, if you're writing about being in a car accident, describe the sounds of the glass shattering and the crunching metal, the smell of smoke as the airbag deploys, the feeling of your body being thrown back and forth. Try to avoid referring to the event explicitly or including any narrative buildup ("I was driving a Dodge Neon when the accident happened"). Focus instead on the moment itself, and on what you see, smell, hear, and feel in order to build the scene.

Inspired by Powers’s own experiences as a machine gunner in Iraq, The Yellow Birds takes its name from a marching song that Powers learned while serving in the army. Lisa Allardice, judging panel chair and editor of the Guardian Review, reported that Powers “utterly fulfilled the first book award criteria of promise, originality and raw talent.” Allardice was joined on a panel of judges by authors Ahdaf Soueif, Kate Summerscale, William Dalrymple, and Jeanette Winterson, and Guardian deputy editor Katharine Viner.

Powers was chosen from a shortlist that included two other debut novels, Scottish author Kerry Hudson's Tony Hogan Bought Me an Ice-cream Float Before He Stole My Ma (Chatto & Windus, 2012) and American novelist Chad Harbach's The Art of Fielding (Little, Brown, 2011), as well as two works of nonfiction—Lindsey Hilsum's account of the Libyan revolution, Sandstorm (Penguin Press, 2012) and Katherine Boo's Behind the Beautiful Forevers: Life, Death, and Hope in a Mumbai Undercity (Random House, 2012), which won the National Book Award in nonfiction in November.

Established in 1999 by the editors of the U.K.-based Guardian, the annual First Book Award is given for a debut work of poetry, fiction, or creative nonfiction published in the previous year. Powers joins an international cast of winners that includes Siddhartha Mukherjee, who received the award last year for The Emperor of All Maladies (Fourth Estate, 2011), as well as Philip Gourevitch, Yiyun Li, Jonathan Safran Foer, Zadie Smith, and Chris Ware.

For more information about the Guardian First Book Award, visit the website. To listen to a discussion from the judges about this year's shortlist and an interview with Kevin Powers about his winning novel, check out this podcast from the Guardian.

Write about something that has been passed down through your family for generations. It can be anything from an appreciation for music to a healthy appetite, or even a political bias. Explore both the positive and negative implications, exploring how this inheritance has shaped you.

Write an essay about your memories of Thanksgivings past, how your family celebrated the holiday and what it means to you now and why.

Last night at the National Book Foundation gala in New York City, novelist Louise Erdrich was named the recipient of the 2012 National Book Award in fiction. Erdrich, whose latest novel is The Round House (Harper, 2012), will receive $10,000.

This is the first National Book Award for Erdrich, 58, who over the past thirty years has authored fourteen novels and a short story collection, three books of nonfiction, and three poetry collections. The Round House, the second installment in a trilogy, follows an Ojibwe boy as he seeks to avenge his mother's rape. Erdrich, who is part Ojibwe, dedicated her award last night to "the grace and endurance of native people."

"This is a book about a huge case of injustice ongoing on reservations," she added. "Thank you for giving it a wider audience."

In nonfiction, Katherine Boo took the prize for her debut, Beyond the Beautiful Forevers: Life, Death, and Hope in a Mumbai Undercity (Random House, 2012). David Ferry, whose latest collection is Bewilderment: New Poems and Translations (University of Chicago Press, 2012), won the award in poetry. William Alexander won in the young people’s literature category for his young adult novel Goblin Secrets (Margaret K. McElderry, 2012). Each winner receives $10,000.

The awards were given amid recent discussions among publishers and the National Book Foundation that the annual award—one of the most prestigious literary prizes in the United States, second perhaps only to the Pulitzer—had become too insular, and was in need of expanding its image and scope. Finalists in fiction included such names as Dave Eggers and Junot Diaz; the finalists in nonfiction included Robert Caro's Lyndon Johnson series and the late Anthony Shadid's lauded memoir House of Stone (Houghton Mifflin Harcourt, 2012). Honorary prizes were also given to author Elmore Leonard and longtime New York Times publisher and chairman Arthur O. Sulzberger Jr.

Write an essay about your relationship to food. Consider the following questions: Do you see food as merely sustenance or as emotional comfort? What is your favorite meal and why? Were you a picky eater as a kid? Which foods do you detest and why?