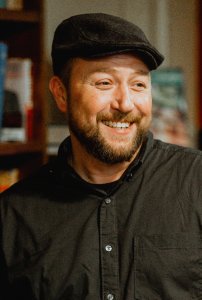 Ray McManus’s poems and prose have appeared in numerous journals and anthologies. His poems can be quirky, sometimes funny, sometimes quite dark, often both at the same time.  His first book, ­­Driving Through the Country Before You Are Born, was selected by Southern poet Kate Daniels and published by USC Press in 2007. Since then he has gone on to publish three more books: Left Behind (published by Stepping Stones Press in 2008), Red Dirt Jesus (selected by Alicia Ostriker for the Marick Press Poetry Prize and published by Marick Press in 2011), and Punch. (published by Hub City Press in 2014, and winner of the 2015 Independent Publishers Book Award). McManus has recently co-edited an anthology with USC Press called Found Anew.

Although McManus’s books seem placed in the semi-rural and sometimes repressive Southern culture of the Carolinas, where the laughter or worse silence of others “is the threat that keeps us moving forward,” there are also repeated themes about the haunting presence of Ireland -- or more precisely, that unreal Ireland of the imagination that exists in family story and immigrant memory. McManus’s work explores themes that wrestle with loss, faith, denial, and rebellion, the narrative of hope and the heroics of failure. His latest book, Punch., is very much a book about the working class, the grit and grime that hammers at the once romantic ideal of America, and perhaps out of all of McManus’s work, it is the most autobiographical.

Ray McManus earned his MFA in poetry and his Ph.D. in Rhetoric and Composition from the University of South Carolina. An Associate Professor of English at the University of South Carolina in Sumter, McManus teaches creative writing, Irish literature, and Southern Literature, and has won many awards for teaching and scholarship on southern and Irish culture.  He is the director of the Center for Oral Narrative housed in the Division of Arts and Letters, Writer in Residence at the Columbia Museum of Art, and the Chair for the South Carolina Academy of Authors.  McManus is the founder of Split P Soup, a creative writing outreach program that places writers in schools and communities in South Carolina, and former director of the creative writing program at the Tri-District Arts Consortium. His current outreach project is Re:Verse, a teaching initiative that works with teachers and administrators on developing effective strategies for bringing creative writing back to standard education.

2006 -- The South Carolina Poetry Book Prize, Driving Through the Country Before You are Born