Worth the Wait: A Profile of Arundhati Roy

Arundhati Roy must be tired of hearing the same question: What took you so long? But then, it has been two decades since her debut novel, The God of Small Things, was translated into forty-two languages, sold eight million copies, and won the prestigious Man Booker Prize, and she was catapulted to international fame and remarkable financial success. Now, with the June release of The Ministry of Utmost Happiness (Knopf), she is not apologizing for the wait. Busy traveling, writing, and establishing herself as an outspoken activist, Roy explains that about ten years ago, the “mad souls,” the constellation of characters in The Ministry of Utmost Happiness, grew insistent. “Anjum, Tilo, Saddam, Musa, and the gang moved in with me and colonized my imagination,” she says. “And for me, while fiction is necessary, I prefer it to be timeless rather than timely. So when I write fiction, I am prepared to wait for it to come to me. I am never in a hurry.” 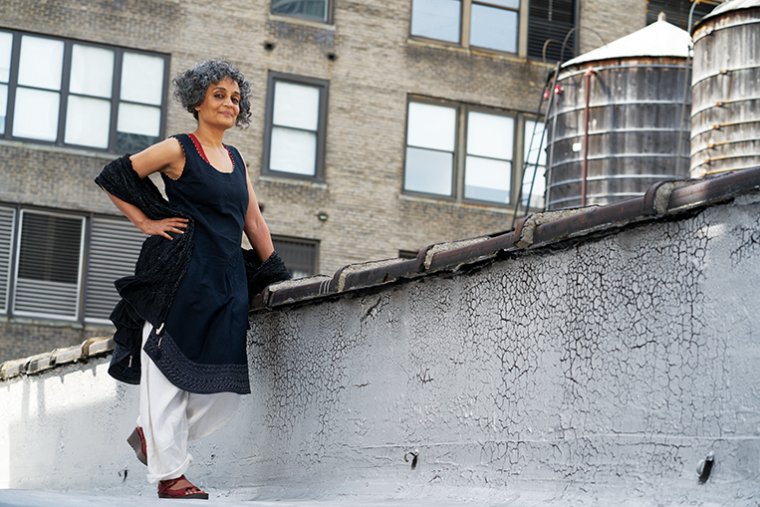 Yet for someone who prefers not to hurry when it comes to fiction, she is certainly capable of moving with a sense of urgency, if her prolific, and often polemic, nonfiction is any measure. Roy cites a “watershed moment” when, in 1998, the newly formed Hindu Nationalist government in India conducted a series of nuclear tests, “which were greeted by the media and establishment with a nationalist fervor and talk about the return of ‘Hindu pride’ that changed the nature of what could and could not be said politically.” Roy had her say in an essay titled “The End of Imagination,” a critique of these policies. “While India was being hailed as a great new economic power,” she says in retrospect, “within India millions of poor people were being further impoverished by the new economic policies; tens of thousands of small farmers, deep in debt, were committing suicide. Young Muslim men accused of being ‘terrorists’ on very flimsy and often fabricated grounds were being thrown in prison. Kashmir was on fire.” Her essays and speeches turned into a steady stream of books, including Power Politics (South End Press, 2001), The Algebra of Infinite Justice (Viking, 2001), War Talk (South End Press, 2003), Public Power in the Age of Empire (Seven Stories Press, 2004), Field Notes on Democracy: Listening to Grasshoppers (Haymarket Books, 2009), Broken Republic (Penguin, 2011), and Capitalism: A Ghost Story (Haymarket Books, 2014). Fiction had to wait because, she says, she had no choice: “I could not watch all this happen as I continued my glittering career as a prize-winning novelist. I began to travel and write about these things because it was urgent and necessary to do so.” Her efforts did not go unnoticed. Roy was awarded the Lannan Cultural Freedom Award in 2002, the Sydney Peace Prize in 2004, and the Sahitya Akademi Award in 2006. (She rejected the most recent award, from the Indian Academy of Letters, because she opposes the government’s policies.) And she’s been giving back, contributing prize money and royalties to fund various causes and small organizations, mainly in India.

Even though the characters from The Ministry of Utmost Happiness took up residence in her imagination, she wasn’t ready to share them until about seven years ago, after a visit with her friend John Berger at his home in France. A mentor and also a Booker Prize winner, in 1972, for his novel G—in other words, someone whom she listened to before his death early this year—Berger told her to go to her computer and read to him whatever fiction she was writing, which she did. Impressed, he said she should go right home and finish the book, which she intended to do. But a few weeks later, in Delhi, she found an anonymous note pushed under her apartment door asking her to visit the Maoists in the jungles of central India—an offer she couldn’t refuse. This was followed by a period of still more waiting, though eventually, she asserts, those characters themselves brought the novel to closure: “They compelled me! Stubborn people. I had no choice.”

“She lives in the graveyard like a tree,” reads the first sentence of The Ministry of Utmost Happiness—an opening that is enigmatic, tantalizing, and predictive. The “she” is the aging Anjum, a central character whose mother, thrilled to have given birth to a boy, discovers “nestling underneath his boy-parts, a small, unformed, but undoubtedly girl-part.” So Anjum, originally known as Aftab, begins her journey, as readers begin theirs, into the world of the Hijra. A somewhat ambiguous term, Hijra refers to a person whose gender is neither male nor female, including those born intersex, though it most frequently refers to individuals who were born male but identify as women. (In 2014, the Supreme Court of India recognized Hijra as “a third gender,” thus conveying legal status.) Roy is careful to point out, however, that she has not “used” Anjum, whom she refers to as “a Beloved,” to typify a category of people: “She is herself and distinct. Yes, she has a schism running through her, like many others in the book. Many of them have borders of caste and out-casteness, of religious conversion, of nation and geography.”

The novel crosses other borders of both perspective and place. Set primarily in present-day New Delhi, with a political backdrop of Kashmir’s struggle for independence, The Ministry of Utmost Happiness spans more than thirty years, often through Anjum’s eyes as she establishes herself in that space where her relatives are buried. “Over time, Anjum began to enclose the graves of her relatives and build rooms around them,” Roy writes. “Each room had a grave (or two) and a bed. Or two. She built a separate bathhouse…[she] called her Guest house Jannat. Paradise.” Beginning by taking in down-and-out travelers, Jannat Guest House becomes a community center of sorts, where nearly all the characters in this intricately plotted novel find themselves—some, as Roy playfully writes, “for The Rest of Their Lives,” some to bond as family, some only for a moment of comforting connection.

It is in Jannat Guest House, a place of physical as well as spiritual union, that Anjum and others recognize as well as honor a continuum of life and death—a place where “the battered angels in the graveyard that kept watch over their battered charges held open the doors between worlds (illegally, just a crack), so that the souls of the present and the departed could mingle, like guests at the same party.” This became a guiding image for Roy, who worked with designer David Eldridge and photojournalist Mayank Austen Soofi to create the cover art for the novel: a vertical picture of a decaying white marble grave with a withered rose placed right below the title. The haunting image melds beauty and decay and suggests the compatibility of change and permanence.

In The Ministry of Utmost Happiness Roy shifts places, time periods, and viewpoints with the grace of a master choreographer as characters take circuitous paths that are at times parallel, then intersecting or conflicting, ultimately seeming a matter of both coincidence and fate. She works at that unstructured structure. “To me, the way a story is told is almost more important than the story itself. I think I might be incapable of telling a story in chronological order,” she says. “For me, a story is like the map of a great city or, at the very least, a large building. You can’t explore it by driving down the main street or entering from the front door and exiting through the back. You have to live in it, wander through the by-lanes, take blind alleys and have a smoke with the people who live there, look into the rooms from the outside in. That’s the fun of it!”

Turning Time Around: A Profile of Donald Hall
by John Freeman | Feature 11.1.14

Donald Hall may not be producing any more new poems, but the eighty-six-year-old author of more than fifty books is still revising; still polishing his prose, including the pieces in his new book, Essays After Eighty; and still...

Such Great Heights: A Profile of Annie Dillard
by John Freeman | Feature 3.1.16

Annie Dillard has applied an endless curiosity and formidable intellect to elevate a searching and searing style of prose that has served as an example for generations of writers. A new collection, The Abundance, celebrates her masterful...

Telling Stories in the Sunlight: A Profile of Judy Blume
by Kevin Nance | Feature 7.1.15

Her books, for readers of all ages, have been published in thirty-two languages and sold more than eighty-five million copies worldwide, but Judy Blume, whose new novel, In the Unlikely Event, was published by Knopf in June, has always...

Louise Glück says a poet must be surprised by what the mind is capable of unveiling, which may explain why her twelfth book of poems, Faithful and Virtuous Night, published in September by Farrar, Straus and...