Telling Stories in the Sunlight: A Profile of Judy Blume

At the 2009 Key West Literary Seminar, Rachel Kushner was onstage discussing her first novel, Telex From Cuba (Scribner, 2008), which was inspired by stories from her mother, who had grown up on the Caribbean island ninety miles to the south in the 1950s. In the audience that day was best-selling author Judy Blume, a longtime resident of Key West, Florida, and a member of the Literary Seminar board of directors. When she heard Kushner utter the phrase “the fifties,” an epiphany hit Blume with the force of a thunderclap. She had a story to tell, she realized—a big, important story rooted in the fifties but about which, curiously, she had spoken to no one for more than half a century. 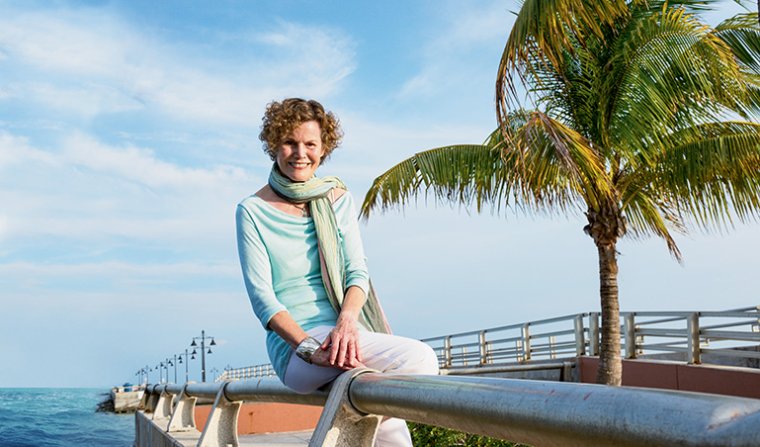 Over the course of fifty-eight days in late 1951 and early ’52, when the then Judy Sussman was in the eighth grade in her hometown of Elizabeth, New Jersey, three airplanes crashed there, all in or near residential neighborhoods and all with significant loss of life. When the first plane plummeted from the sky, it was believed to be a freak accident in an era when commercial air travel was relatively new and glamorous. When another disaster followed, the adults in Elizabeth began to wonder whether something was awry at nearby Newark Airport, while the kids—including Judy and many of her classmates at Alexander Hamilton Junior High—spoke of sabotage, aliens from outer space, perhaps even zombies. And when the third plane went down, it seemed to many that the town was under siege, or the victim of some modern version of a biblical plague. The airport was shut down for nine months pending a safety review, which ultimately failed to explain the crashes.

And for decades afterward, the future writer, who had watched her town endure unthinkable horror—her own father, a dentist, was called in to help identify burned bodies from dental records—kept those dangerous memories in some vault in her mind, locked away.

“I must have really buried this someplace so deep inside of me that for more than forty years it never occurred to me, ever, that I had this story to tell,” Blume says in a tone of wonder at the elegant Key West home she shares with her husband, nonfiction writer George Cooper. “How is that possible? It was really deep, I guess. My husband says I never told him this story. My daughter, who became a commercial airline pilot, said, ‘Mother, I cannot believe you never told me this story.’”

Better late than never. In her latest novel, In the Unlikely Event, published by Knopf in June, Blume unpacks the events of those two months when the sky kept raining down catastrophe on Elizabeth. The product of months of research and years of writing and editing, In the Unlikely Event hews closely to the actual details of the crashes and then, with the imaginative sympathy that has been a hallmark of Blume’s novels for young people and adults over the decades, describes the toxic fallout that afflicted the lives of the townspeople. The result is a portrait of a community in crisis, in which grief, fear, and outrage are balanced, to some extent, by the characters’ capacity for heroism and a faith that, even in the shadow of tragic events, life goes on.

“Because that’s what you do when something terrible happens,” the author explains. “You keep going, doing what you do.”

Along the way, Blume weaves a tasseled shawl of historical detail of New Jersey in the early fifties—the era of Frank Sinatra, Martin and Lewis, Nat King Cole, cocktails at the Riviera, Jewish gangsters, Liz Taylor haircuts, Joe McCarthy’s Red Scare, and sci-fi movies dressing up A-bomb paranoia in Halloween costumes—in which the comfortingly mundane reality of the characters provides a vivid contrast to the disruption of the airplane crashes. The novel’s heroine, Miri Ammerman, and her uncle, the young reporter Henry Ammerman, who breathlessly covers the crashes in the purple prose of small-town newspapers of the day (the word inferno comes up with alarming frequency), struggle to maintain their sense of normal life in the midst of extremely abnormal circumstances.

“I have a fabulous memory for my early life, but I remember very few things about the crashes—which is why I had to do so much research,” Blume reflects, still puzzled, one typically perfect afternoon in Key West. “I do have a very vivid memory of where I was the afternoon of the first plane crash. I was in a car with my parents on a Sunday afternoon, and it came over the radio: ‘We interrupt this program to tell you…’ The crash was a block from our junior high school—one block!” She thinks back, shakes her head. “I knew that the crashes happened, but I don’t remember my feelings about them. Was I scared? Was I not? I don’t know.” Another thoughtful pause. “But all the mundane stuff, how people lived back then, was right at the tips of my fingers. I am, after all, a kid of the fifties.”

It was in that seemingly carefree yet oddly stifling decade that Judy Sussman began to develop as a storyteller—not a writer yet, as she kept her tales in her head—which served as a way to explore questions that often couldn’t be asked out loud, even of her parents, as beloved as they were. “Full of secrets,” Blume, still peeved, says of that decade. “Nobody told you anything.”

The 1970s were hardly better. When the author’s narratives began to be recorded and published in her late twenties and early thirties, she was immediately celebrated—and in some circles deplored and censored—for her frank fictions that touched on, among other things, the physical and sexual development of girls and young women. Are You There God? It’s Me, Margaret (Bradbury Press, 1970), still perhaps Blume’s best-known novel for teenagers, was primarily about its sixth-grade heroine’s struggles in a mixed-faith family, but caught the disapproving eye of cultural conservatives who objected to its candor about brassieres, menstruation, sanitary napkins, and the like. In Deenie (Bradbury, 1973), Blume broached the topic of masturbation, and in Forever... (Bradbury, 1975), she graduated to teen sex. Her books’ directness on these and other “adult” themes made them simultaneously among the most banned and most popular books of their era. (To date, according to her publisher, Blume’s books in all genres have sold more than eighty-five million copies, making her one of the world’s most commercially successful writers.)

“I was very interested in writing about real life, about growing up,” Blume says. “Nobody talked about those things back then, so the books were a way to satisfy my curiosity.”

Kristen-Paige Madonia, author of the young-adult novel Fingerprints of You (Simon & Schuster, 2012), grew up feeling similarly about Blume’s novels for teens. “My sister and I took turns reading Margaret, which was incredibly important to us,” says Madonia, who got to know Blume personally years later. “Judy took subjects that were masked and muddy and made them okay and understandable. She was very clear about things that were happening to us as young girls—boobs and periods, all that—and you felt you were in dialogue with her. She was with us, speaking to us, which was far more comfortable than having that conversation with your mother or a teacher. Her voice is so accessible, so warm and down-to-earth, and I think that’s why she’s connected to so many readers over the years.”

In later years Blume turned to adult fiction, producing a pair of best-sellers, Wifey (1978) and Smart Women (1983), both published by Putnam. Although writing had always been a joy—“I felt as if I were reborn every morning,” she says—Blume suffered an existential funk in the early 1980s after reading Dad (Knopf, 1981) by William Wharton, whose prose struck her as so superior to her own that she felt paralyzed. “I was so caught up in the book that it totally took away all my confidence,” she says. “I just felt, ‘Why am I doing this? I can’t write this well. I will never write as well as this.’ And I couldn’t write at all for three months.”

Eventually, Blume got her groove back, in part by making peace with what she sees as her own limitations as a prose stylist. “It was never about putting the words on paper,” she says now, over a dinner of grilled snapper and Key lime pie at an open-air beachfront restaurant. “I’m not that kind of writer, as many people would tell you. It’s about getting the story out, the story and the characters. It’s not about the language. I do what I have to do to tell the story.”

With that pragmatic approach, Blume has written several new books in recent years, including a third blockbuster for adult readers, Summer Sisters (Delacorte, 1998). But her editor at Knopf, Carole Baron, says that Blume’s way of describing her writing process doesn’t do it justice. “She’s a great writer, whether she believes it or not,” says Baron, who also edited Summer Sisters. “Her dialogue in particular is perfection. And I do believe that’s one of the reasons—whether in adult books or books for the young—that Blume has always connected with her readers. She knows how to speak to them through the words of her characters. Her writing is deceptively simple, but it delivers a blow. To say that it’s not about the language, she’s selling herself hugely short.”

As for the popular (and vaguely dismissive) characterization of Blume by some as a “YA writer” who occasionally writes books for adults, the author shrugs. “Children’s books, YA books, adult books—it’s all the same process,” she says. “Lots of times, I don’t know which it is. I’m just telling a story.” With a knife, she slices through a thick layer of meringue on the pie, as if hacking away at the fluff of the argument. “I hate categories,” she says with a rare frown. “You have to be published by a certain department, and there are children’s book buyers, YA book buyers, adult book buyers. But that’s about the marketplace, not the book.”