Such Great Heights: A Profile of Annie Dillard

Annie Dillard wasn’t sure she was going to like me, she says, not long after I arrive at her cabin near Cripple Creek, Virginia, in the dark vastness of a November evening. Night had dropped abruptly as a curtain, just as she had warned it would, and were it not for the nearly topographic directions she’d e-mailed beforehand, and a few tips by telephone from her husband, Bob—that is, Robert D. Richardson, biographer of Thoreau and Emerson and William James—I probably would have been skulking about in the dark, kicking into one of the old iron forges Confederates used to make cannonballs a hundred fifty years ago. “I wasn’t sure if you were one of those guys who doesn’t like taking directions from a woman,” she says. 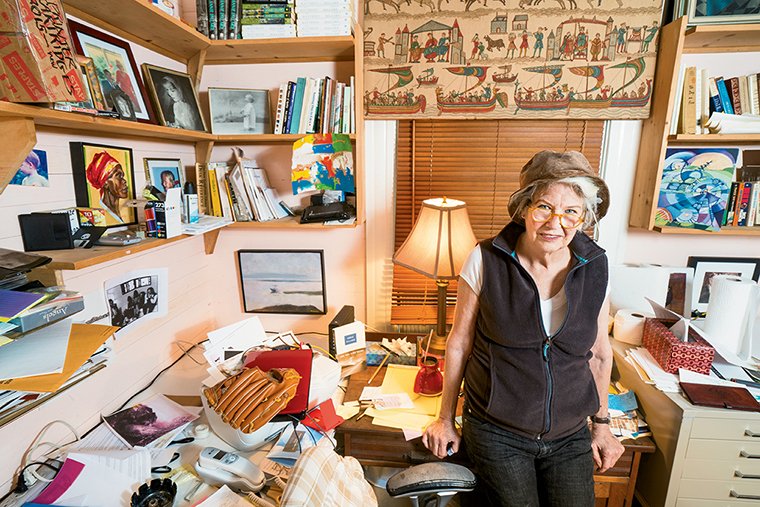 Instead, thanks to Dillard’s directions and a good bit of luck, my friend Garnette Cadogan—who came along as my copilot—and I are sitting at her dining table, cupped in the mountain cove’s silence that fills the room like a held breath, we men sipping whiskey and trying to play it cool as one of the most sensitive, listening intelligences ever to breathe American air perches before us like a falcon, unsure whether we’re for the eating or for the protecting. Dillard inquires if we mind smoke, lights an American Spirit and inhales deeply. As Bob lays out a simple supper of sweet potatoes and salmon, she steps into the silence, quizzing us on some of the books we’ve read recently.

Not surprisingly—for a writer who casually dropped into one of her books, as an aside, “I have been reading comparative cosmology”—the path into this conversation gets steep very quickly. Her references fan out, leaping from one outcropping of literary news to the next until my bad planning or Garnette’s driving or what is being read in New York seem a long way down. What do we think of Karl Ove Knausgaard? Is it possible he might not be as interesting as he thinks he is? Have we heard of Belomor by Nicolas Rothwell, the Australian writer? Now that is a masterpiece. Pico Iyer’s book on Graham Greene? He’s very good at Ping-Pong, Dillard adds, improbably. What about women, Garnette asks, after Dillard lists a string of books by men. Are there any women writers she likes? “I don’t read as many women as I’m told I should be reading,” Dillard replies. “I don’t like doing what I am expected to do.”

We start talking about humor, and as if tuned by sonar to Dillard’s needs, Bob returns holding a book on stand-up comedy by Phil Berger.

You can almost hear the pops and fizzes of combustion as the flue clears and Dillard’s mind gulps down the oxygen it has been feeding on for years—books. It’s something to behold. Here is the sensibility that emerged from a white-glove Pittsburgh background because she read a novel about Rimbaud and wanted her mind to be on fire too. Here is the writer who pulled it off, chiseling out Pilgrim at Tinker Creek (Harper’s Magazine Press, 1974), the Walden of our time, in nine months because she read a book on nature and felt she could do better. And thus Dillard wrote that great, elegant prayer to the seasons, largely at night, in the Hollins College library in Roanoke, Virginia, powered by chocolate milk, Vantage cigarettes, and Hasidic theology. Here is the woman who, upon winning a Pulitzer Prize for that book at age twenty-nine, turned her back on fame and stepped even deeper into the void—this time all the way out to Lummi Island, Washington, in Puget Sound, to write a sixty-six-page narrative on pain and eternity and God, Holy the Firm (Harper & Row, 1977).

In person, the effect of all this is like meeting a mountaineer whose work lay behind her but whose stories of having done it still get passed around as legend. If Holy the Firm pointed to the peak Dillard was trying to climb, and her next book, Living by Fiction (Harper & Row, 1982), was a nod to the people who had gone before her and failed, then the ones that followed, Teaching a Stone to Talk: Expeditions and Encounters (Harper & Row, 1982) and The Writing Life (HarperCollins, 1989), told the story of actually doing it. The false starts, the caffeine yo-yos, the encounters in the Amazon or the Arctic—or at church—that kept pushing the horizon further out; the tapping at supporting rock walls and the bolts she’d drilled into them to see if they’d hold; the occasional plummets. All the hard work of staying awake, and the descent. One of the reasons Dillard is so beloved is that she tried just as hard to make the case that we could all do it, live this way, that all you need to do is work with a demented singularity of purpose.

But most of all, through everything, she has never stopped reading. “I have written down every book I’ve read since 1964,” Dillard explains as I turn the Berger book over now, wondering in what obscure corner of her mind she will sock this information away. These diaries now get packed off to Yale’s Beinecke Library as fast as she fills them, just the name of the book and occasionally a checkmark, if it was really loved. I remark there’s something almost monkish about this notational labor, surely she must be the best-read person for hundreds, if not thousands of miles—an assertion she refutes before I can finish the comment by telling me about Bob’s physician, who had read one of her books in German and English, just for the comparison.

As for her, what is she after, inhaling those hundred or more books a year since age five? That library in the sky of her mind she has built. What is she seeking? “It’s what I’m for,” Dillard says simply, putting out her cigarette. “Somebody has to read all these books.”

For the past ten years, that—and painting, and walking—is what Annie Dillard has been up to. “I had a good forty years of writing,” she explains to me later, but she stopped writing after her novel The Maytrees was published by Harper in 2007. “There’s no shame to stopping. My last two books were as high as I could go,” she adds, referring to the novel and For the Time Being (Knopf, 1999), her book about belief in landscape and time. The smoke has barely cleared from these books, though, and it is only now, as her oeuvre has settled into the culture—or perhaps, most important, the loam of its writers—that its radical illumination has begun to reveal its long neon half-life.

It is through the doorways Dillard torched open that writers as diverse as Jonathan Lethem and Maggie Nelson have stepped, the latter of whom was one of Dillard’s students at Wesleyan and is now a friend. “Her books are wild,” Nelson writes to me. “They do what they please; they do what they need to do; they keep their eye trained on the things that matter most.” Geoff Dyer was also enabled by Dillard’s permission and contributes an introduction to The Abundance: Narrative Essays Old and New, which is being published this month by Ecco with selections from all of Dillard’s work, including the lamenting and powerful uncollected essay she published after the attacks of September 11, 2001.

I tell Dillard the story of a writer I know, Phil Klay—a future marine, no less—who didn’t learn of the attacks until days later because he was walking the Appalachian Trail. “I was on the beach in Cape Cod,” she replies, nodding. “I came out of this shack I was writing in and figured now might be a good time to disappear.” She then taped a twenty-dollar bill to the gate at the top of the dunes, on the hope a passing stranger with honor and time to spare would pick up some provisions, some batteries. Someone did. Meanwhile, rather than wait, Dillard went back to doing what she has dedicated an enormous portion of her life to doing: contemplating the infinite.

Even in the dark near Cripple Creek, bedtime approaching, it’s clear the apparatus for this life remains in place. Dillard lives in a cabin separate from her husband’s, and has a third where she paints. All of this will be shown to us in the morning. “Bob,” Dillard says, just before turning in, eyes over my shoulder, “those are headlights.” For a brief second Richardson’s face flashes with alarm, and then indeed two beams begin to snake up Dillard’s long gravel driveway. As Bob walks out onto the porch to greet the surprise guest, Dillard explains to us that this is most likely Gary LaVallee, a friend from the area who helped Dillard clear the land on which she built the two additional buildings.

Gary’s methods are as extreme as Dillard’s observational register is austere. He doesn’t work with a crew, just his car, which he repeatedly drove into tree trunks on the nearby hillside to fell the evergreens, then hacked up what was left with an ax. His arms are as muscled as those of a professional rugby player. His eyes twinkle benevolently. Somewhere in the hills nearby he is building an enormous, five-thousand-square-foot cabin, alone, by hand, with eighty-foot logs he raises by himself with a pulley system. Gary talks genially and then excitedly when he finds out Garnette is working on a book about Bob Marley: “I heard him open for Springsteen.” He offers to pick up milk or anything else for Bob and Annie, and when told they’re okay, gently leaves.

Until recently, Bob and Annie inform us as Gary departs, he was driving around the hills of Cripple Creek in an antique dump truck with no brakes and a pile of boulders in the back. Now Gary gets around mostly by pickup or car, and occasionally he parks in their drive to use their Wi-Fi and get on Facebook.

“I’m not sure I believe in God,” Dillard says, packing up her books and supplies for a night of reading, “but I believe God watches out for Gary LaVallee.”