In his essay “Meditations of a Sitter,” Louise Glück’s onetime teacher Stanley Kunitz penned a line of such searing veracity it seems a condemnation of entire quadrants of the human tribe: “The empty ones are those who do not suffer their selfhood.” To suffer a selfhood means to embody the soul of self, to know yourself en route to becoming yourself. Glück studied with Kunitz at Columbia University in the mid-sixties, and for nearly five decades she has been the American poet most willing to communicate the flammable vicissitudes of selfhood, to detect the temblors beneath the self’s consistent adaptations to the facts of living. The facts of any life are impotent and ineffectual until literature intercedes, until it takes hold of those facts and twists them into the light, casting a refraction that allows us to glimpse them anew. 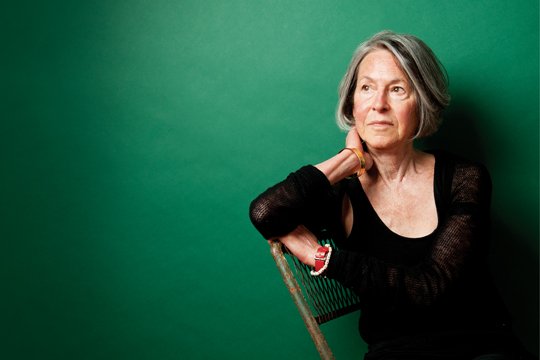 Glück’s refractions reveal the counterpoint between fable and fact, between mythos and mundanity, between the paralysis of silence and the necessity of assertion. Her new book of poems, Faithful and Virtuous Night, published in September by Farrar, Straus and Giroux, betrays an intimate surrealism, a congress of parable and dream—it’s more a stranger to normality than anything she’s ever written and ceaselessly thrilling in its tonal effects. Thoreau believed that “truth strikes us from behind, and in the dark,” but in Glück truth seems to strike always from below, from beneath the half-lit undulations of desire and dread.

Glück shares a birthday with Immanuel Kant and is the author of thirteen books of poems and a fierce collection of essays. She is the Rosenkranz Writer-in-Residence at Yale University, and for eight years served as judge for the Yale Series of Younger Poets, a service of which she remains immensely proud. As a poet she’s so decorated that if she were a general you’d have to squint into the glare of her: the Bollingen Prize for Vita Nova (Ecco, 1999), the Pulitzer Prize for The Wild Iris (Ecco, 1992), the National Book Critics Circle Award for The Triumph of Achilles (Ecco, 1985), the Wallace Stevens Award, the Lannan Literary Award—on and on. We spoke for several hours one July afternoon at her home in Cambridge, Massachusetts. Her immaculate apartment is adorned with artwork by the poet Mark Strand, and out back breathes her beloved garden, transplanted here from Vermont thirteen years ago.

What’s remarkable about the architecture of Faithful and Virtuous Night is that one can land anywhere inside this book and find a poem that is both self-fulfilled, unconcerned with what precedes or follows, and also a component in the larger whole that informs the unfurling narrative. You’ve erected similar scaffolding in the past—in all of your books since the 2007 collection, Ararat, the poems coalesce and function as a single movement—but in its intricacy and dynamism the architecture of this new book seems to me entirely different.
It seems to me different too. There were years when I thought I’d never resolve the issue of this structure, never be able to give a shape to these poems, which usually means there’s a piece missing, as was true here. I had first thought that the long monologue—which is now divided, interspersed with these surreal, fragmented narratives and prose poems—I had thought that the long poem would be a whole that moved roughly chronologically from section to section, but it seemed lifeless when I put it together that way. I tried rearranging the sequence but that wasn’t the answer. At some point, fiddling with order, I put the title poem next to “An Adventure.” That juxtaposition suggested the shape this book wanted. But that shape didn’t really find itself until the end—when I wrote prose poems, which I’d never done before—they were written in a tide of exhilaration at the thought that maybe I could finally finish this book.

Those prose poems are ligatures that allow the whole to cohere with such startling poise. They recall the way Hemingway’s vignettes function in his story collections, the narrative tendons connecting muscle to bone. I cannot conceive of this book without them.
I can’t either. It was my friend Kathryn Davis who prompted me toward them. She’d read every poem as it was written, and during one of my many stages of hopelessness she said, “I think you should be reading Kafka’s short fiction.” I’d read Kafka’s short fiction before but thought I’d try again, and although I didn’t love it this time around, that was useful to me, because I didn’t feel daunted by him. I read the short-shorts—“The Wish to Be a Red Indian” and others—in bed, where all my mental activity now occurs. My bed usually looks like Proust’s bed; my whole life is lived there. I got my notebook—which I keep around usually for other purposes, because if I let myself think that I might write something I become so paralyzed with longing and despair I can hardly bear it—and I wrote a little prose poem. It was, I thought, terrible, not even worth typing. But I was having dinner with Frank Bidart that night—I’m willing to be humiliated in the presence of my friends—and so before I threw away the prose poem, I thought I’d see what Frank thought. And Frank, as you know, can be a tough critic. He told me I mustn’t throw it out, and after that I wrote a little squadron of them. The book was then very easy to put together. I’d been trying for two years, but I didn’t have that last mode. It didn’t need another large thing, another tone, but it needed another mode, another facet to the prism, another method by which to examine these same materials.

What a bolt of insight for Kathryn Davis to recommend that you go back to Kafka. The frequent playfulness and stabs of comedy in your work are too little noticed, and the same is true for Kafka: Many readers don’t notice how funny he can be. I’m delighted by your dedication to great prose writers. The poetic persona in “A Summer Garden” is reading Mann’s Death in Venice. Do you see a novelist’s sense of narrative as different from your own?
Yes, I think prose writers work with narrative very differently. When I’m trying to put a poem or a book together, I feel like a tracker in the forest following a scent, tracking only step to step. It’s not as though I have plot elements grafted onto the walls elaborating themselves. Of course, I have no idea what I’m tracking, only the conviction that I’ll know it when I see it.

The novelist enjoys a clear advantage over the poet who employs narrative: The novelist has characters who need something, and they have either to achieve their needs or not achieve them. The plot is the pursuit of those needs. The poet doesn’t necessarily have that. I like your image of stalking through the wood, unsure where it ends. The novelist had better see to the end of that wood. Not that there can’t be surprises in what is found there, but better at least to glimpse it in advance.
I depend on that ignorance, on not seeing to the end of the book, because if I have an idea, initially it’s likely to be the wrong idea. I mean my ideas come later, after the fact. Ideas are not a part of how I conceive of a book.

Reading you, and especially these new poems, I’m often in mind of a quip by the English critic Desmond MacCarthy: “It is the business of literature to turn facts into ideas.”
It’s pretty, but I don’t know if that’s what I think. I don’t like that trinity of words: business, facts, ideas. I don’t think literature exactly has a business, and the minute someone says to me what the business is, I immediately want to prove that that’s too limited a notion. For instance, I want to substitute tone for fact. If you can get right the tone, it will be dense with ideas; you don’t initially know fully what they are, but you want by the end to know fully what they are or you won’t have made an exciting work. For me it’s tone—the way the mind moves as it performs its acts of meditation. That’s what you’re following. It guides you but it also mystifies you because you can’t turn it into conscious principles or say precisely what its attributes are. The minute you turn tone into conscious principle it goes dead. It has to remain mysterious to you. You have to be surprised by what it is capable of unveiling. As you work on a book of poems you begin to understand what is at issue, but I don’t have any attitude toward the facts. And if MacCarthy’s terms are correct, I would prefer the notion that a poet turns ideas and abstractions into facts, rather than the other way around.

All through your work, certainly from Ararat on, much of that rhythm happens by the repetition of simple terms. In this new book the same terms appear again and again: silence, winter, mother, father, night. The overlap of personae works the same way, when the poet’s perspective repeatedly intrudes upon and augments the perspective of the larger narrative.
Yes, there’s that overlap, as you say, because over and over there are the same materials, though to my ear they’re passing through a very different lens. More interesting to me than the repeating words (which seem fairly ordinary) are the repeated images. When I put the book together, I was astounded by the internal tapestries. I hadn’t consciously built in those recurrences or echoing gestures and vignettes, but there they were—there was the train, and the train again, and the train was a character. Averno I thought of the same way, actually. It’s not a shaped narrative arc the way some of the others are, but it’s a meditation on a set of conditions and dilemmas, so all the poems revolve around certain repeating images, such as the burned field, which is right out of Henning Mankell. Averno was my homage to Mankell. I tried to use something from one of his books in every one of the poems. Nobody noticed it, which is good, but it was there for me.

Wow, I never realized how much work (and angst) goes into the creation and completion of compiling poetry.  Thanks for shedding some light on this subject.  The poems are so effortless to read sometimes it is easy to forget.  Janelle www.janellefila.com