Nearly half the world’s languages are endangered to some extent, with one language becoming extinct roughly every two weeks, according to the United Nations Educational, Scientific, and Cultural Organization (UNESCO). Barring swift revitalization efforts, more than 2,500 of the nearly 7,000 tongues spoken in the world today are predicted to disappear by the end of the century. More than two hundred, such as Peru’s Panobo and Angola’s Kwisi languages, have become extinct since 1950. 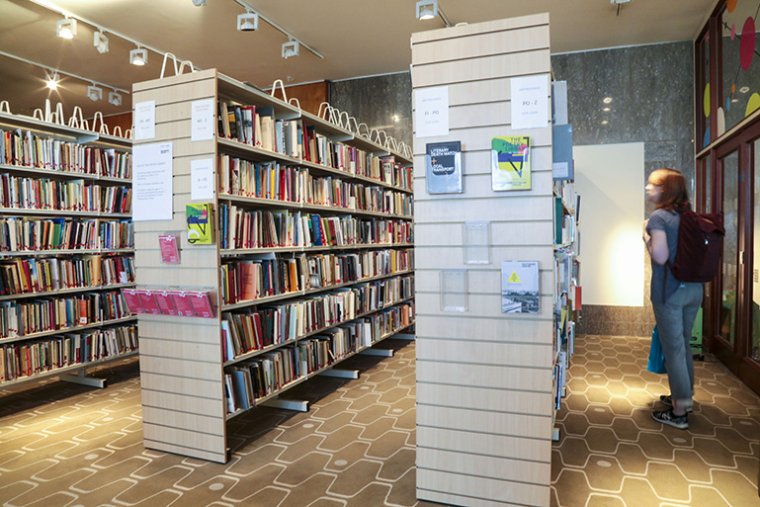 The National Poetry Library at the Southbank Centre in London.

Losing a language is not like losing a precious ancient artifact, such as a piece of jewelry or a Grecian urn. A language is not a synchronic object, encapsulating a culture at a single moment in time, but rather a dynamic force that binds people together within a shared, ongoing history. When a language vanishes, it takes with it something intrinsic and irreplaceable about human experience in general and a marginalized culture in particular. Chris McCabe, the poetry librarian at Southbank Centre’s National Poetry Library in London, had this in mind when he launched the Endangered Poetry Project, which seeks to collect poetry written in endangered languages and archive it in the library’s permanent holdings.

McCabe first conceived of the project, which launched in the fall, after coming across a striking bit of literary trivia: Instead of the official Latin expected of him, Dante composed the Divine Comedy in a medieval Tuscan vernacular. “That got me thinking about how many great poems there might be out there in dialects and endangered languages,” says McCabe. “After looking into endangered languages more closely, I realized how many languages are under threat.”

At the time, Southbank Centre’s National Poetry Library already included poems in more than two hundred languages. Within its first three months, the Endangered Poetry Project had ushered in over a dozen more, including the Shetlandic dialect of Scots as well as Kristang, a severely endangered creole language spoken in Singapore and parts of Malaysia by a community of mixed Portuguese and Asian descent. McCabe and his team crowdsource poems from around the world, and encourage anyone familiar with a well-known poem in an endangered language to submit it through the project’s website (www.southbankcentre.co.uk/endangered-poetry). After collecting both written and audio versions of each poem, staff members at the National Poetry Library then print them on handmade paper and store them in a specially made conservation box. Although the foremost goal of the initiative is to gather poems in their original languages, McCabe also strives to procure English translations whenever possible. There are also plans to make some poems accessible online, and McCabe says that the initiative will “continue in perpetuity to gather poems from languages under risk.”

The fear of losing language—and specifically losing the poetry of a language, which can often help crystallize and communicate the experiential and linguistic information of a given culture—is part of what motivates McCabe, who is also a widely published poet and writer. “Poetry has a place in most cultures and languages where other art forms might not have gained traction,” he says. “This could easily have to do with economic factors—poetry costs nothing to create, especially in oral forms—and also with the fact that when a language comes into existence, it becomes the material for the human imagination to capture events, ideas, and emotions.”

The Endangered Poetry Project owes some of its early success to a rousing inaugural event in October during the fiftieth anniversary of Poetry International, a biennial poetry festival in London founded at the Southbank Centre by poet Ted Hughes in 1967. During the event, called “Seven Thousand Words for Human,” multinational poets Joy Harjo, Nineb Lamassu, Gearóid Mac Lochlainn, and Nick Makoha read pieces they had written for the occasion in languages such as the Ugandan Luganda and Muscogee Creek. Southbank Centre translator-in-residence and festival organizer Stephen Watts furnished English translations of each poem, and a member of the public even volunteered to recite a poem in the Logudorese dialect of Sardinian.

Another highlight for McCabe was the moment, a few weeks later, when he received a selection of poet Claude Vigée’s “Schwàrzi Sengessle Flàckere ém Wénd” (“Black Nettles Blaze in the Wind”), a long Alsatian requiem written in tribute to the language, which was banned in schools in the Alsace region after World War II. The poem is special to McCabe because it captures the anguish of losing one’s native tongue: “Our hoarse voices, broken long ago / Suddenly stopped: / Already, on our school bench, / In the thrall of the forceps of language / We felt like tongue-cripples / Tangled up in our songs.”

Maggie Millner teaches creative writing at New York University, where she is pursuing an MFA in poetry. Previously she was the Diana & Simon Raab Editorial Fellow at Poets & Writers Magazine.