It has been just over five years since the shooting at Sandy Hook Elementary School in Newtown, Connecticut, on December 14, 2012, during which twenty first-graders and six educators were killed. Since then, more than 150,000 Americans have lost their lives as a result of gun violence, and the public debate about guns in America—recently magnified by a mass shooting in Las Vegas in October and at a church in rural Texas in November—rages on. But a new anthology of poetry and essays aims to offer a different perspective on an issue that is so often oversimplified by the media. 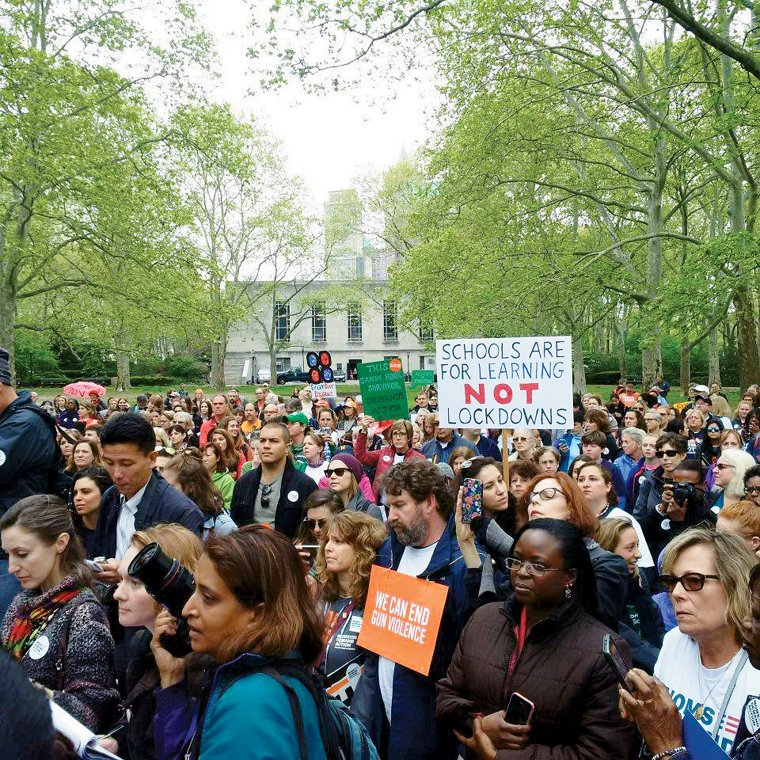 Abbey and Brian Clements (holding an orange sign) at the Moms Demand Action for Gun Sense in America march across the Brooklyn Bridge in May 2016.

Published a week before the fifth anniversary of the Sandy Hook shooting and coedited by poets Brian Clements, Alexandra Teague, and Dean Rader, Bullets Into Bells: Poets and Citizens Respond to Gun Violence (Beacon Press) is a powerful call to end gun violence in the United States. The anthology includes poems by dozens of celebrated poets—including Billy Collins, Ocean Vuong, Natasha Trethewey, and Juan Felipe Herrera—paired with nonfiction responses by activists, political figures, survivors, and others affected by gun violence. The anthology’s “call and response” structure showcases the direct relationship between specific acts of gun violence and the poems that were generated as a result. In the book’s foreword, former congresswoman Gabrielle Giffords—who survived being shot in the head at a 2011 meeting with constituents in Arizona—and her husband, retired astronaut and Navy captain Mark Kelly, write, “Survivors, advocates, and allies can change hearts and minds—and move more people to join our fight for solutions—by telling stories about the irreparable damage that gun violence does to families and communities across the country.”

When they began compiling the book, the editors knew it would have a political purpose. “We agreed that the anthology would do more than simply collect literary responses to a political issue—it would need to be a political artifact in itself,” says Clements, for whom the anthology has a personal thrust. His wife, Abbey, worked as a second-grade teacher at Sandy Hook Elementary School in 2012 and has since become an outspoken activist for gun control. Clements and his fellow editors envisioned the anthology as both a tribute to those who die by guns every year and a way to find common ground in the discussion about gun violence.

Several poets the editors invited to contribute, including Robert Hass, Tess Taylor, and Yusef Komunyakaa, chose to write new poems for the anthology. “These poems tend not to respond to specific events but are, instead, often deeply personal meditations on the poet’s relationship to guns or their individual experiences with shootings,” says Rader. He points to two poems in particular: one by Brenda Hillman about her family’s gun, and one by Bob Hicok that revisits the 2007 shooting at Virginia Tech, where he was a professor at the time and even had the shooter, who killed thirty-two and wounded seventeen, in one of his classes. “Both of these poems move beyond mere ‘anger’ and toward some larger notion of individual and communal ethic,” says Rader.

With more than fifty poems and fifty responses, the anthology brings together many perspectives on a complicated issue. “A big part of the impetus for the anthology was that conversations in the media about gun violence often become a loop of the same few sentiments, without the range of voices that poets were offering,” says Teague. “Christopher Soto’s ‘All the Dead Boys Look Like Me,’ for instance, written in the wake of the 2016 shooting at Pulse nightclub in Orlando, Florida, draws together personal experience with the often fatal dangers that queer brown bodies face in our country, as well as with family connections, activism, and a call for reimagining this legacy of endangerment and death.”

In another of the anthology’s pairings, Samaria Rice, mother of Tamir Rice, the twelve-year-old boy who was shot by police in Cleveland in 2012, responds to Reginald Dwayne Betts’s poem “When I Think of Tamir Rice While Driving,” which opens:

in the backseat of my car are my own sons,
still not yet Tamir’s age, already having heard
me warn them against playing with toy pistols,
though my rhetoric is always about what I don’t
like, not what I fear, because sometimes
I think of Tamir Rice & shed tears…

Rice responds, “When I think of Tamir as his mother, the woman who gave birth to him, I wonder why my son had to lose his life in such a horrific way in this great place we call America…Tamir was an all-American kid with a promising and bright future…. Who will govern the government when they continue to murder American citizens?”

In another pairing, Po Kim Murray of the Newtown Action Alliance responds to a poem about the Sandy Hook shootings. Antonius Wiriadjaja, who survived being shot on the sidewalk in New York City as he walked to the subway in 2013, responds to Jimmy Santiago Baca’s poem “A Morning Shooting,” about a young man who is shot in a driveway on his way to work. “The poems themselves are exceptionally powerful, but the combinations of poem and respondent results in another order of emotional impact,” says Clements.

“Throughout the collection, the poets and respondents imagine how the lives of those killed by gun violence, and their survivors, could have been different if not for racial discrimination, homophobia, and other forms of violence that have replaced listening and supporting the lives and potentials of all our citizens,” says Teague.

The Bullets Into Bells editors hope to expand the project’s reach beyond the book. In the coming months, a number of events will be held across the country, featuring readings and panel discussions with the poets and essayists from the anthology. A related website for the project (beacon.org/bullets-into-bells-p1298.aspx) includes additional poems, statements from activists, opportunities for action, data on gun violence, interviews, and more. “One of my hopes,” says Clements, “is that this project—the book, the web content, the events around the country—will be part of a perhaps slower but more direct and more personal approach, bypassing the national media, that will encourage poets, readers of poetry, and literary audiences who might not otherwise have become involved in this movement to get more involved.”

Colum McCann echoes this hope in his introduction to the book: “The conviction behind this anthology is that we should be in the habit of hoping and speaking out in favor of that hope. It is, in the end, an optimistic book. The poems assert the possibility of language rather than bullets to open up our veins.”

Maya Popa is a writer and teacher living in New York City. She is the author of the poetry chapbook The Bees Have Been Canceled (New Michigan Press, 2017). Her website is mayacpopa.com.

“The M Word: Muslim Americans Take the Mic,” a new series of readings and events from PEN America, aims to give voice to Muslim American writers and advance the conversation about the challenges that Muslims face today.