The Wednesday morning after Election Day delivered a political shock for just about everyone, including writers—but hot on the heels of the electoral surprise came an existential dilemma: How could writers attend to the quotidian concerns of sentence structure, agent-hunting, and sending out work when America was so divided on seemingly every major issue—from reproductive and LGBTQ rights to immigration laws and the environment? Like much of America that morning, many writers turned to their friends and colleagues for answers. “On Facebook, everyone was saying, ‘Now more than ever we need fiction, art, and books,’” says writer Anna March, who had spent time in Pennsylvania that week, knocking on doors for Hillary Clinton with her mother. “I got a little bit panicky. I thought, ‘Oh my God, are people really thinking that art is going to save us?’ Because it’s really about organizing and getting out the vote.” Similarly, fiction writer Paula Whyman, based in Bethesda, Maryland, described the morning after the election as a rare world-changing moment. “As a fiction writer I had a lot of questions in my mind about what would happen to fiction and how we would go on working,” she says. “Does it really matter now?” 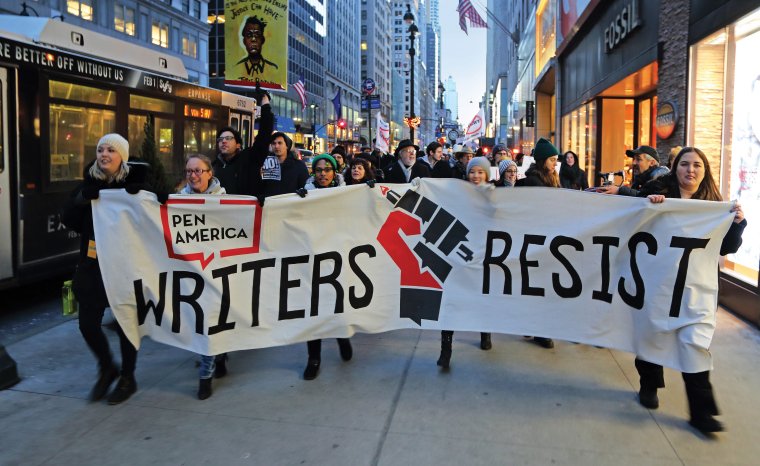 Protesters march on Trump Tower in New York City as part of the Writers Resist rallies in January.

Both Whyman and March reached for similar outlets to channel their doubts and reassert the power of writing. Whyman answered a call on Facebook by her friend, the writer Mikhail Iossel, for help launching a new publication and with a small group started Scoundrel Time, an international online journal intended to foster artistic expression in the face of political repression and fear. March, eager to harness the energy of the arts community for political activism, decided to start Roar Feminist Magazine, an online publication that would provide a platform for politically informed fiction, poetry, and essays—as well as a way to strike back against an election that frequently devolved into disrespectful language, most notably the leaked Access Hollywood tape showing Donald Trump making lewd comments about women. “We wanted to do something that was both literature and revolution,” says March.

These efforts are part of a growing number of projects and events started by writers, editors, and literary organizations in response to the election and the current political climate. Poet Erin Belieu and PEN America organized Writers Resist rallies, which brought out thousands of writers and citizens in cities all across the United States on January 15, five days before the presidential inauguration, to “defend free expression, reject hatred, and uphold truth in the face of lies and misinformation.” Poet Major Jackson started a collaborative poem, “Renga for Obama,” at the Harvard Review, while the Boston Review released the poetry chapbook Poems for Political Disaster, and Melville House published What We Do Now, an essay collection focused on “standing up for your values in Trump’s America.”

Roar and Scoundrel Time both launched in late January—Roar on Inauguration Day and Scoundrel Time ten days later—and have since produced an impressive body of work and attracted large followings in just a few short months. “The idea of starting a new journal would be laughed at otherwise,” says Whyman. “There are so many excellent journals doing beautiful work that I in no way want to compete. But I think of this as something entirely different.”

Indeed, the interest both magazines have received in terms of financial support and submissions suggest that the audience is engaged. With a very small inheritance from her grandmother, who died shortly before the election, March was able to launch the Roar website and with her collaborators held a successful crowdfunding campaign that raised $12,000 in just a few months. The Roar staff includes Sarah Sandman and  Bethanne Patrick as executive editors, Jagjeet Khalsa as production editor, and several section editors, including novelist Porochista Khakpour and humor writer Cynthia Heimel. The title is a play on the “pussy” motif that appeared on posters and signs, and in knitted hats, after Trump’s infamous Access Hollywood remarks were made public. According to March, the journal’s mission involves “roaring, not meowing.”

The most prominent feature of Roar, which publishes three new pieces each day, is a section called “My Abortion,” in which women relate their experiences with abortion. The daily column serves to remind readers of what’s at stake under the strongly antiabortion Trump administration. Other columns include the Roar Meter, which uses numbers to tell a story: “Number of votes by which Hillary Clinton won the popular vote: 2,864,974 / Number of Americans who receive Planned Parenthood services: 2,840,000” reads the beginning of one entry. A column called Fight This Hate highlights “a small selection of hate crimes and/or harassment,” alongside fiction, poetry, and art sections. “Think about if Guernica met the Nation or VQR met Mother Jones,” says March. “We want to be at the intersection of the finest writing and political activism.” The editors plan to expand in the spring by publishing six pieces a day and bringing on more explicitly political writers.

Scoundrel Time (named for the 1976 book by Lillian Hellman about the McCarthy era) is, in Whyman’s words, “a place for artists to respond as artists” to the postelection reality. “There are wonderful and thoughtful journalists and commentators, people at think tanks, and activists in every realm doing important things,” says Whyman. “But this is a place for artists to speak to what’s going on from their particular perspective. We can keep telling one another stories, and those stories will draw people in and give them some relief.” The journal is a registered nonprofit organization, and the all-volunteer staff plans to look into nonprofit partnerships. Slightly less confrontational in tone than Roar (though no less political), Scoundrel Time publishes fiction, photography, poetry, essays, and dispatches from around the world, with a focus on content that’s current. “The strongest argument I can think of for satire and parody is that despots and authoritarian regimes of all stripes hate it so,” Tony Eprile writes in a February essay tying recent Saturday Night Live sketches to a long tradition of political subversion through mockery. Fiction writer Jodi Paloni also spearheads an Action section, encouraging readers to make calls and show up to protests.

Scoundrel Time and Roar also drummed up support at the Association of Writers and Writing Programs (AWP) Conference in Washington, D.C. in February. Whyman and her fellow Scoundrel Time founders gathered in the lobby of the Trump International Hotel on Pennsylvania Avenue and read aloud from James Baldwin, Emma Lazarus, and Claudia Rankine. Meanwhile, Roar supporters wearing pink “pussy hats” handed out pink Roar-branded condoms and stickers at the bookfair. They weren’t the only ones making a statement at AWP: Split This Rock, a D.C.–based organization focused on poetry and social change, collaborated with organizations such as VIDA: Women in Literary Arts and CantoMundo to hold a candlelight vigil for freedom of expression outside the White House, during which writers such as Kazim Ali, Ross Gay, and Carolyn Forché delivered speeches about the importance of writing and art.

Scoundrel Time plans to organize similar actions in the future, but for now it carries on that spirit of standing together and holding space, albeit online, for writers to freely speak their minds. With their new journals, both Whyman and March hope they can help writers to, as Whyman says, “hang on to our humanity and feel like [we] can gain understanding.”

Sarah M. Seltzer is a writer of fiction, creative nonfiction, journalism, and ill-advised tweets. A lifelong New Yorker, she is the deputy editor of the culture website Flavorwire.com.