On a recent trip to New Orleans, my friend and I went to a bar in the neighborhood known as Algiers. We met a local man there, who hung out with us for the rest of the evening. About three hours into our conversation, I casually mentioned that my last name means “crescent moon.” He backed away from the table with a fearful gesture and said, “Oh, so you’re definitely Muslim.” This is the M-word in action, and this is how it functions in everyday social situations. It can suddenly change the mood, discontinue or alter conversations. PEN America’s new initiative, “The M Word: Muslim Americans Take the Mic,” aims to address this social effect head-on through a series of events and stories that will give voice to some of the most powerful and innovative writers in the Muslim community. The two-year initiative, which launched last fall and is funded by a $225,000 grant from the Doris Duke Foundation for Islamic Art’s Building Bridges Program, seeks to advance the conversation about the challenges of self-identification and self-expression that Muslim Americans face in today’s social and political climate. 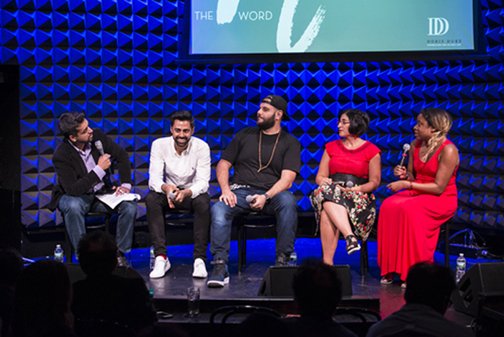 An organization devoted to advancing literature and protecting free expression at home and abroad, PEN America has highlighted Muslim writers by publishing their work on its website, pen.org, and by inviting Muslim writers to speak at the annual PEN World Voices Festival in New York City, where the organization is based. The M Word series continues this work by giving a more dedicated platform to the Muslim community. “We are for the first time focusing on the richness and diversity of Muslim American writers but also their deep contributions to the American literary canon and landscape,” says Clarisse Rosaz Shariyf, the deputy director of public programs at PEN America.

For centuries, Muslim Americans have played a vital role in building America’s varied and inspiring cultural landscape. But their voices have often been marginalized, a trend that has accelerated in today’s political climate, as misinformation and the normalization of hate speech have given rise to divisive rhetoric and rampant Islamophobia. “PEN America wanted to counter this trend by giving Muslim American creators the mic, so to speak, to tell their stories, their way, and to challenge prevailing narrow representations of Muslims in popular media,” Shariyf says.

The series kicked off in New York City this past September with an event called “The M Word: Muslim-American Comedians on the Right to Joke,” which featured comedy sets and a conversation with journalist and award-winning playwright Wajahat Ali, and comedians Negin Farsad, Mo Amer, Hasan Minhaj of The Daily Show, and Phoebe Robinson of 2 Dope Queens. PEN plans to host similar events in Boston; Washington, D.C.; Los Angeles; and other cities across the country. The next event, part of the Muslim Protagonist Symposium hosted by the Muslim Students Association at Columbia University, will be held in late February in New York City and will focus on Muslim American fiction writers.

To expand the program’s reach, PEN will also share original stories by Muslim American writers online. “We are inviting audience members, online followers, panelists, and others to share their personal experiences. The stories we collect will become part of the PEN American Center Digital Archive of Free Expression and may also appear on pen.org, Facebook, or other platforms,” Shariyf says. Videos of the M Word events are also posted online and sometimes live-streamed.

To help shape the series, PEN is collaborating with prominent organizations and individuals within the Muslim writing community. PEN cohosted an event in September at the Brooklyn Book Festival with Akashic Books and the Muslim Writers Collective, a volunteer-run group that organizes monthly open mics for Muslim writers and artists (the collective has active chapters in several cities, including Seattle; Boston; Houston, Texas; and Ann Arbor, Michigan). PEN has also solicited several advisers, including Pulitzer Prize–winning playwright Ayad Akhtar; Sana Amanat, creator of the comic-book series Ms. Marvel (Kamala Khan); novelist Zia Haider Rahman; religious scholar and media commentator Reza Aslan; and Ali, who moderated the September event. “Everyone talks about Muslims, but no one is really interested in talking to them or having them emerge as protagonists in their own narrative,” Ali says. “The M Word is not a politically correct, feel-good, liberal proselytizing series. It examines, dissects, uncovers and celebrates the diverse experiences that are too often silenced, stereotyped, or excised from the final draft.” When asked what the M-word means to him, Ali explains, “Muslim is an identity, a signifier that means an individual in some way identifies with a religion that acknowledges the Allah as the Creator and the Prophet Muhammad as his messenger. It’s one of my chosen identity markers that denotes my spiritual path and religious communities. On 9/11, I was a twenty-year-old senior at UC Berkeley. Since that day, I have become an accidental representative of this word and the 1.7 billion people it allegedly represents. I became us and them. My career has been spent navigating the alleged divides, building this bridge and inviting others to cross it.”

Ali remains hopeful. “Change takes time and effort, it never comes without some friction. I hope the M Word helps cast a spotlight on these talented American Muslims who rarely get their voices heard in front of mainstream, privileged audiences. It’s education, entertainment, and an opportunity to bridge the divides.”

Marwa Helal is the winner of BOMB Magazine’s 2016 Poetry Prize. She lives in New York City and received her MFA from the New School. Follow her on Twitter, @marwahelal.