The Radius of Arab American Writers

When poet Glenn Shaheen first started writing, he had little sense of community as an Arab American writer. He felt constrained from writing about Arab American issues or identity, and his undergraduate writing professors scoffed at “identity writing,” telling him it would be “a cheat to write like that, because you’d immediately get published.” But when fellow poet Hayan Charara introduced Shaheen to the Radius of Arab American Writers (RAWI), Shaheen found a community that supported and empowered his artistic freedom. “RAWI helped me be proud of my Arab heritage. Knowing there was a thriving community of Arab writers of all backgrounds and genres made me realize I was actually a part of that community,” says Shaheen. “I feel free to write about anything now after meeting so many other Arab writers—some working on science fiction novels or ecopoetry or experimental dramatic works. It helped me see that there isn’t a specific mold of an Arab American writer that I should aspire to or avoid.” 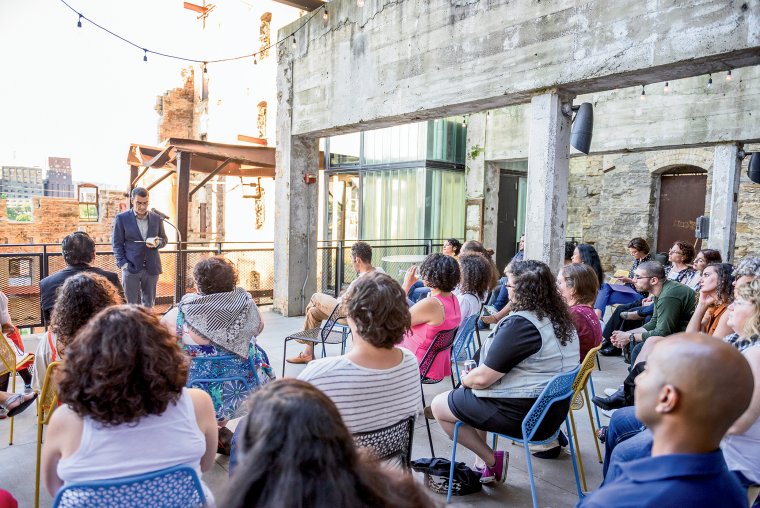 Shaheen is not the only writer who has found community through RAWI, a nonprofit organization that for the past twenty-five years has worked to support and disseminate creative and scholarly writing by Arab Americans. RAWI—a word that means storyteller in Arabic—was first established in 1992 by journalist and anthropologist Barbara Nimri Aziz as a seven-person group of writers that met in Washington, D.C. It has since grown into a thriving community of nearly 125 writers, artists, and journalists all over the world, from the United States to the United Arab Emirates. Members include literary heavyweights like Pulitzer Prize finalist Laila Lalami, National Book Award finalist Rabih Alameddine, poet and translator Fady Joudah, and poet Naomi Shihab Nye. The organization now hosts workshops and a biennial conference that features panels, readings, and workshops for Arab American writers. The last conference, which focused on a range of topics including craft, publishing, and the effects of Islamophobia, was held in Minneapolis in June 2016 and cosponsored by Mizna, a nonprofit that promotes Arab American culture. The next conference will take place in Houston, Texas, in June 2018. In the meantime, RAWI has also launched In Solidarity, a series of daylong workshops and craft talks for people of color, members of marginalized communities, and allies in various cities throughout the United States. The series was spearheaded by fiction writer Susan Muaddi Darraj, and the first workshop, which took place in March in Washington, D.C., gave writers space to talk about identity, publishing, and being a writer in the margins. The second was held in San Francisco in April, and more are in the works around the country. “We hope these workshops foster communication and a feeling of solidarity among various communities,” says Darraj. “At least one writers circle has been formed as an outcome of these daylong workshops.”

In the coming year RAWI will be doing even more. In March the organization began advocating for the first-ever Arab American caucus, to be held at the next Association of Writers and Writing Programs conference in Tampa, and is currently planning a twenty-fifth-anniversary celebration. In October the University of Arkansas Press will publish Jess Rizkallah’s poetry collection the magic my body becomes, winner of the Etel Adnan Poetry Prize, a new award given for a first or second book of poetry by a poet of Arab heritage and cosponsered by RAWI. “Leading RAWI has always been rewarding and challenging, but it is especially so this year,” says executive director Randa Jarrar. “I’m dazzled by our community’s literary output—we have so many excellent books out this year and next, and on and on.”

RAWI’s growth hasn’t been without some pains. “The challenge is often fund-raising, and belonging to a nation that often doesn’t celebrate our work alongside us, but picks and tokenizes, or silences,” Jarrar says. Both before and after 9/11, Arab American writers have had to balance the desire to be read and recognized for the quality of their work with being hyper-visible spokespeople for their homelands while struggling to live and work amid ongoing hostility toward Arab people. With the president’s recent ban on travelers from several Arab-majority countries, Arab Americans face increased challenges. “More than ever,” Jarrar says, “I hope that RAWI can be a solace and provide its members and the Arab American literary community support and a sense of belonging and connection and resistance.”

For many writers, RAWI has done just that. “It has shown me that we exist,” says Palestinian American poet Tariq Luthun. “I think, like any population, we are at least vaguely aware of the fact that we aren’t the only ones of our kind. But seeing and experiencing this community firsthand is so vital to one’s resolve in continuing to do this work.” Emerging poet Kamelya Omayma Youssef agrees. For her, RAWI provided the foundation she needed as a writer. “Imagining that I can eventually read to a room full of people and be heard without the threat of reductive thinking or fetishization or demonization should not be as radical as it is for me today,” she says. “But it is totally radical. RAWI is that room.”

Marwa Helal is a poet and journalist who lives and teaches in Brooklyn, New York. She is the winner of BOMB Magazine’s 2016 Poetry Contest and the author of the poetry collection Invasive species, forthcoming from Nightboat Books in 2019. Her website is marshelal.com.

“The M Word: Muslim Americans Take the Mic,” a new series of readings and events from PEN America, aims to give voice to Muslim American writers and advance the conversation about the challenges that Muslims face today.