The Beauty of Being: Our Eighteenth Annual Look at Debut Poets 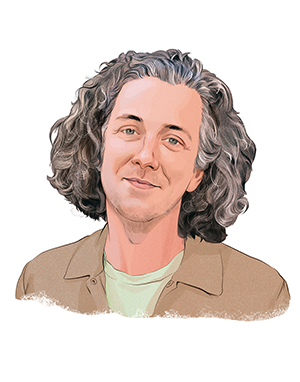 (no wrestler has ever used an Annie Lennox song as entry music
for fear the whole world might weep, split
apart at its belt, whistle its conscience to make itself cry)

—from “bar trivia: no wrestler has ever used an Annie Lennox song as entry music”

How it began: I was a huge fan of professional wrestling growing up, but I gradually stopped following as my life got busier. I didn’t watch much in college or graduate school, but when I moved to Utah there was a crew of wrestling fans who got me back into it. Meanwhile, I was writing these poems about self-harm and masculinity, and one night it just hit me: Pro wrestling offers such an interesting mechanism for exploring those issues. I mean, you’ve got these literal larger-than-life men acting out over-the-top violence to tell stories that smudge the line between fiction and reality—what better way to interrogate masculinity than to write poems about their mothers?

Inspiration: Obviously wrestling but also nature. I spend a lot of my free time hiking, camping, and gardening, which in the high desert at around 6,000 feet means very little water and a very difficult growing climate with big temperature fluctuations and lots of unpredictability. I guess that’s just how I like things. But as I was working on The Gardens of Our Childhoods and tending to my own garden, I was struck by the tangled, overlapping relationship between gardens and nature—how it mirrors that of fiction and reality in wrestling. Gardens are nature we try to curate and script, but it never really goes according to plan—wildness always finds a way in. Even the most orderly and formal French garden has that wildness at its heart.

Influences: David Kirby’s work has been a massive influence ever since my school days, so it was a huge honor for him to blurb Gardens. Anne Carson’s work also influenced this book in particular, and I’ve been lucky to have studied with wonderful poets whose words and cadences will forever be a part of me: Robin Becker, Julia Kasdorf, James Brasfield, and Todd Davis, among others.

Writer’s block remedy: I go up the mountain or into the woods. Also teaching—I find it impossibly difficult to write unless I’m teaching.

Advice: Find or start a writers group! There is nothing better for accountability, feedback, and progress than a writers group. I was extraordinarily lucky to be in a group with two exceptional writers while I was working on Gardens: Sarah Bates and Laura Walker. Sarah was working on a wonderful chapbook, Tender, that has since been published by New Michigan Press, and Laura is on sabbatical traveling to various residencies to finish her novel right now. So yeah, get thee a writers group!

Finding time to write: Isn’t that always the dream—finding time? I used to write in binges—six to ten hours in a single go. I don’t have large blocks of time like that anymore, unless I’m up into the wee hours, and that’s just not sustainable.

When I moved to Utah, I had to retrain myself to write in the time I had, when I had it: usually thirty-minute to hour chunks. I still go on the occasional all-night writing binge, but I just don’t have the stamina to do it regularly anymore.

Putting the book together: I knew I wanted to braid multiple poetic sequences together into a loose thematic narrative that moved wildly outward into space, and I knew I wanted the Perry Saturn sequence to be the engine of that movement. Then Mike Good with Autumn House suggested a few rearrangements, placing key poems earlier in the manuscript to help the reader get their bearings and learn how to read the book. This was brilliant since the book is filled with interconnections and Easter eggs across poems, and I think the reordering really helped highlight that.

What’s next: I’ve been working on a collection of poems about pirate queens (there are even a few minor pirate queen appearances in Gardens). The central sequence follows a fictional narrator, while the rest focus on various actual pirate queens throughout history. The first two poems are up right now at Menagerie Magazine! 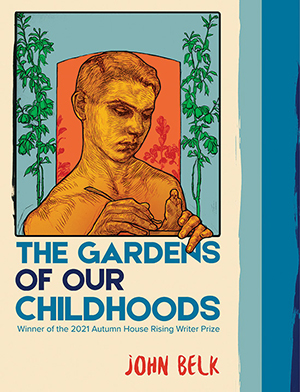 Residence: Cedar City, Utah, at the foot of a mountain under the shade of a giant blue spruce.

Job: I’m a Rhetoric and Writing professor at Southern Utah University, where I direct the composition program. I’m basically a writing teacher, scholar, and data geek administrator when I’m not writing poems.

Time spent finding a home for it: That’s a funny story because I had been shopping an entirely different manuscript around for a couple of years with good success—a few semi-finalist and finalist awards in contests. In fact, that manuscript had been a finalist with Autumn House twice, but for whatever reason, two years ago I decided to submit this new, weird collection of wrestling poems I had been working on instead. I seriously had the other manuscript attached in the submission manager and then at the last minute went back and attached Gardens before hitting Submit. I think I sent it to two or three other contests after that, but Autumn House was technically the first place I ever submitted Gardens, and I almost didn’t.

Recommendations for recent debut poetry collections: The Body He Left Behind (Cider Press Review) by Reese Conner—I’m a cat person and it’s a cat book, but also so much more. Just devastatingly beautiful.

Out of Order (Autumn House Press) by Alexis Sears—an absolute triumph of form, lyric, everything. Gorgeous.

Drift Migration (Ashland Poetry Press) by Danielle Beazer Dubrasky—I’m perhaps biased to Louisiana poetry, where I grew up, and Utah poetry, where I live now. The natural world of Utah is all through this one, but like the other titles I’ve listed, it’s obviously so, so much more.

The Gardens of Our Childhoods by John Belk by Poets & Writers

The Gardens of Our Childhoods by John Belk 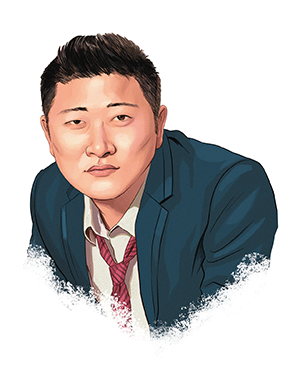 In this moment we are both relentlessly alive.

(Brother, in the garden they said there was a tree for you.)

How it began: This is a hard question to answer. I’ve periodically put together collections of work throughout the past seven or eight years as an exercise in organization. But after a while the collection started to feel like something that existed outside of just me, like clay scraps that began to feel a little alive. That moment of realization was probably where the work stopped feeling like an exercise and started feeling like a book.

Inspiration: I’ve been extraordinarily lucky to be a part of some incredible communities. My MFA colleagues remain some of my best readers and closest friends. Writers conferences and workshop groups have given me some brilliant mentors and readers. Poetry collections can seem like the product of one lone writer, but my book bears the fingerprints of so many exceptional and generous people.

In terms of the work itself: For me poems come from irreconcilable differences in facts and/or desires. What happens when a boxer kills his opponent in the ring? What does it mean when a war criminal is humiliated by his captors? How do I tell a history I am exhausted of telling? A poem is like a ghost, caught between reality and longing. So a lot of the inspiration comes from history, too.

Influences: Like many poets of my generation, Richard Siken’s Crush grabbed me by the throat. I read it at the right time and it showed me what a poem could really do. John Murillo and Li Young-Lee both have this incredible, rangy movement in their work that sets up astonishment so perfectly. Solmaz Sharif’s work really broke open my understanding of the way that form can convey power while leaving room for grace.

Writer’s block remedy: When nothing comes, I take a step back. I follow obsessions, wikiholes, weird facts that I can’t quite square or understand. What happened during the Taiping Rebellion? What’s the oldest surface on earth? And then I try to go back to the page with both a sense of play and some odd constraint. If I think my writing has to be good or meaningful or important, I freeze up. I also try to remember writing poems can just be fun.

Advice: Get readers, ideally people whose work you admire, whose opinions you trust, and who love your work. Putting together a book teaches you a lot about yourself, but sometimes it reveals patterns in your writing that can be obvious to other folks but invisible to you. (Someone told me that I like birds. I’ve never met a single bird.)

Finding time to write: Often the small moments of a day are where the writing happens. I write a lot on my phone, on an app that syncs to my computer. I transfer that work to a Word document and sketch out more when a quiet moment emerges. For some (not all) of the work, that transfer period is useful. If I’m not in the same headspace as I was when writing the original fragment and it’s still interesting to me, that’s usually a good sign that the work has life in it.

Putting the book together: I went through a few different orders: chronological, by subject, even alphabetical at one point. Eventually a friend of mine suggested that the book might be a braid. That resonated. I took every poem in the book and classified it according to subject, length, and intensity, and interwove them together, so history was followed by intimacy, rawness by form. I wanted my reader to feel guided and cared for. After an intense moment or series of moments, there is always a breath.

What’s next: Currently I’m trying to float and follow my impulses. I’m really enjoying playing with some experimental forms: poems of annotation, poems that play with time. This debut is made of work over a long period of time; now that it’s outside of me and in the world, I’m finding joy in discovering new ways to approach lines, line breaks, and sound. 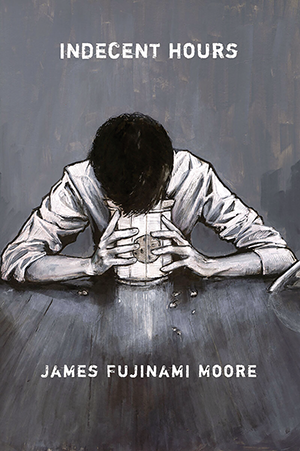 Job: I work in marketing, which is a curious counterpart to writing poetry; attempting to convey as clear a message in as few words as possible, and to evoke only desire.

Time spent writing the book: The oldest poem is about nine years old, which is a funny sensation: In about a decade I’ve written a little over seven thousand words that I think are worth a damn.

Time spent finding a home for it: I was incredibly lucky to have my manuscript solicited by Four Way Books.

Ten debut poets who published in 2021, including Threa Almontaser and Shangyang Fang, discuss the inspiration for their books, their writers block remedies, and advice for other poets.

A Life in Poetry: Our Sixteenth Annual Look at Debut Poets
by Dana Isokawa | Special Section 12.16.20

Ten poets whose first books were published in 2020, including Anthony Cody and torrin a. greathouse, share their inspirations, processes, writer’s block remedies, and paths to publication.

Ten debut poets published in 2019, including Camonghne Felix and Jake Skeets, share their advice, inspiration, and path to publication.