This week’s installment of Ten Questions features Mimi Lok, whose debut story collection, Last of Her Name, is out tomorrow from Kaya Press. In Last of Her Name, Lok brings to life an exceptionally various set of characters and places, reflecting the complex lives of diasporic women across generations. Told in alternating sections, the first story shifts between a British council home in the 1980s and Hong Kong during World War II. The final story follows a grandmother as she travels from one tent village to another, forced to seek out increasingly unlikely shelters after she chooses homelessness rather than being shut away in a senior home. Whether in seven pages or fifty, Lok brings each story to life in clear, precise prose, and draws the reader’s eye to strangeness and injustice without slipping into a didactic tone. When the absurd transpires, she passes no judgment. “I can’t think of a collection that better speaks to this moment of global movement and collective rupture from homes and history, and the struggle to find meaning despite it all,” writes Dave Eggers. Mimi Lok’s writing has appeared in Electric Literature, Hyphen, McSweeney’s, and elsewhere. She earned her MFA in creative writing from San Francisco State University and is the cofounder and executive director of the award-winning nonprofit Voice of Witness. Born and raised in the United Kingdom, Lok lives in California. 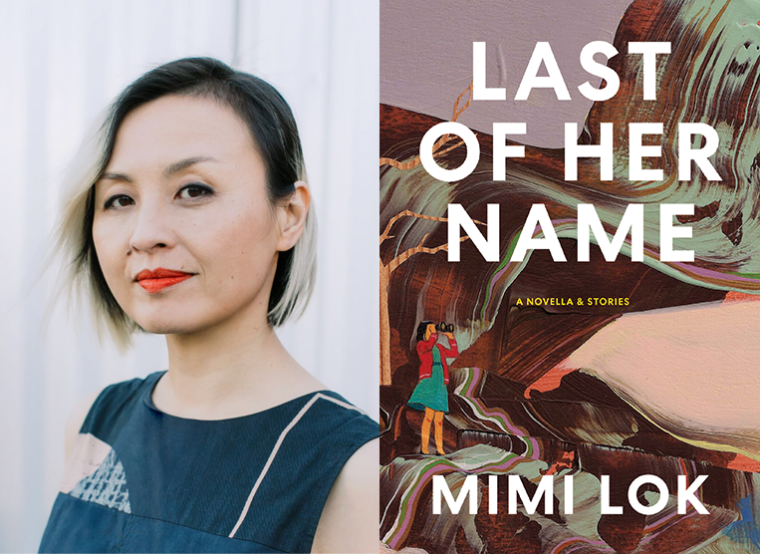 Mimi Lok, author of Last of Her Name.

1. How long did it take you to write Last of Her Name?
I worked in earnest on the manuscript over the course of about three years. But in terms of the span of time the individual stories represent, it’s a bit more fuzzy than that. So many of the stories started off as kernels knocking around in my brain for ages, maybe from a decade ago or more, and then maybe a fragment here and there got onto the page, and then an early draft that was miles away from the final incarnation. For example, the title story started off as a short piece about two sisters painting a house. Then I forgot about it until my MFA in the mid-2000s, when I unearthed it for a workshop class and developed it into more of a family portrait that also delved into the parents’ marriage and earlier lives. Years later when I was working on it for the collection, it evolved further into a dual narrative between the older sister in ’80s British suburbia and the mother as a girl in World War II Hong Kong, both dealing with extreme, harrowing circumstances. I sometimes wish the writing process for me was faster, but things need to percolate in their own time, I suppose.

2. What was the most challenging thing about writing the book?
Balancing the need to write with the need to convince myself over and over that I wasn’t wasting my time.

3. Where, when, and how often do you write?
I run the nonprofit Voice of Witness, which amplifies marginalized voices through oral history. As most people working in the nonprofit world can attest, it’s more than a job—it’s an extremely consuming labor of love. For the first few years, when I was building the organization (I’m also a cofounder), I barely wrote at all. It was really challenging to find the energy and the time and also the justification. Fortunately, I have terrific colleagues and a wonderful board who knew I needed to scale back, and writer friends who kept encouraging me. In recent years I’ve been able to go down to four days a week. I write all day Friday and also grab some time several mornings a week before work.

4. What are you reading right now?
I’m on the second book in Jin Yong’s Legend of the Condor Heroes trilogy. He’s known as the Chinese Tolkien. These are historical martial arts epics that are immensely vivid, exciting, and satisfying. I’ve also been enjoying Madeleine Thien’s Do Not Say We Have Nothing and have an early copy of Meng Jin’s Little Gods on my bedside table, which I can’t wait to dive into.

5. Which author, in your opinion, deserves wider recognition?
I don’t think Gina Berriault gets her due. Barbara Comyns is also a fantastic writer who a lot of readers outside of the United Kingdom it seems aren’t too familiar with.

6. What is the biggest impediment to your writing life?
Basically, life itself! Dirty dishes. Laundry. Not having enough uninterrupted time and space. But I’m a big believer in not trying to have it all. Something has to give. Let the pile of dishes grow. Create and communicate personal and professional boundaries. But maybe water that dying plant because you really don’t need more guilt in your life.

7. What trait do you most value in your editor (or agent)?
So many things to admire about Sunyoung Lee, my editor at Kaya, but above all is her commitment to understanding me as a writer before making a single edit.

8. Who is your most trusted reader of your work and why?
I don’t have just one reader who fits that bill, as everyone—including myself—has some biases and blind spots. For me, I value having a small, diverse group of readers. I can rely on my writing group to give me insightful, honest feedback, and to read as writers, but I also appreciate hearing from people who aren’t writers or editors and who tend to focus their feedback more on their emotional reactions to a piece of writing.

9. What is one thing you might change about the writing community or publishing industry?
I was recently on a short story panel moderated by Peg Alford Pursell, and we talked about how story writers are often admonished with the line that story collections don’t sell, and that story writing is perceived as merely a training ground for the more serious, grown-up business of writing a novel. So I’d love to see more investment in short story writers, especially those who offer rarely seen perspectives. More money, more representation, more exposure.

10. What’s the best piece of writing advice you’ve ever heard?
When I was doing rewrites and my editor Sunyoung thought they didn’t work, it was invariably because she felt that the life depicted on the page felt fictitious rather than lived. I was crushed, of course, but I knew what she meant—I was approaching it more from an idea rather than from an emotional or sensory place. Robert Olen Butler pretty much says the same thing in his book From Where You Dream, which is full of helpful writing advice. You don’t have to agree with everything he says to get something useful out of it, and he doesn’t seem to expect you to. He basically invites you to do XYZ in this precise way, unless it doesn’t make sense for you—in which case, do the thing that makes sense!

“Maybe we are all just a bit frazzled with the state of the world today, but it’s not always easy to sit and focus. When I do find time to write, it’s like I’m back to myself. I’m back home.” —Kimberly Reyes, author of Running to Stand Still...