This week’s installment of Ten Questions features Maaza Mengiste, whose novel The Shadow King is out today from W. W. Norton. At once intimate portrait and sweeping history, The Shadow King tells the story of Hirut, an orphaned servant who comes of age during the Italian invasion of Ethiopia in 1935. Travelling with the army led by the man she serves, Hirut, like the other women, is forbidden to fight. But as the war rages on and the emperor abandons the country into exile, Hirut helps disguise a villager in his likeness to inspire courage and becomes a warrior herself—the guard to the new “Shadow King.” Often shifting perspective to tell the stories of both Hirut and a cast of Ethiopian and Italian characters, Mengiste’s narration is unflinching, fair, and always complex. She speaks into silence, finding language for the trauma and courage—for the life—of a woman at war. “A beautiful and devastating work of women holding together a world ripping itself apart,” writes Marlon James. “They will slip into your dreams and overtake your memories.” Maaza Mengiste is the author of a previous novel, Beneath the Lion’s Gaze (W. W. Norton, 2010), which the Guardian named among the ten best contemporary African books. Her essays have also appeared in Granta, the Massachusetts Review, the New Yorker, and other publications. Born in Addis Ababa, Ethiopia, she currently lives in New York City. 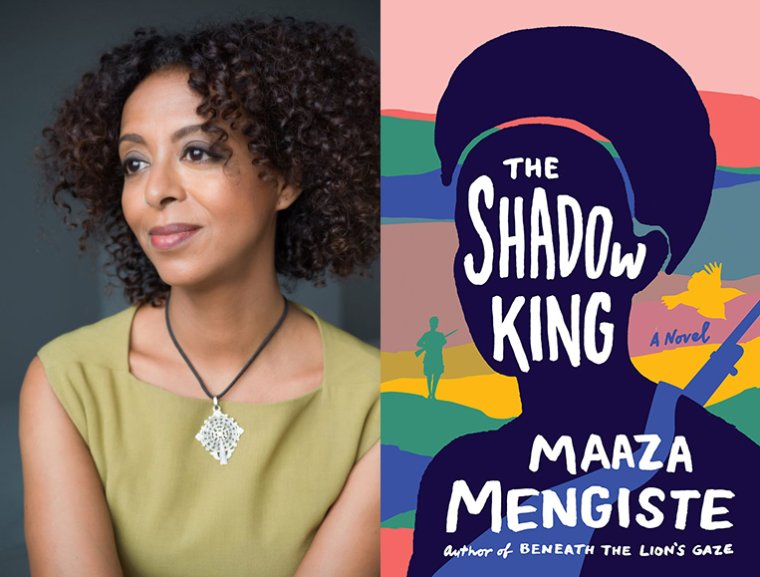 2. What was the most challenging thing about writing the book?
The hardest thing was figuring out how I wanted to tell this story of war. I knew the facts surrounding Mussolini’s invasion of Ethiopia. I knew the details of the subsequent war. I’d read the articles, seen the reels, and looked at the published photographs depicting both sides. I didn’t know how all of this would take shape in a novel though, and that was because I didn’t know what story I wanted to tell about this particular war. What I eventually came to understand, from looking at several varied accounts of this conflict, was that history was biased. History is a narrative created by human beings who are biased, and make mistakes. I began to look into the gaps and erasures, the silences left deliberately or in error, and see what emerged. I started moving away from official accounts and archives, and instead started going through personal journals, diaries, and photographs of those involved in this war. I started talking to descendants of those who fought in the war. I started to “read” photographs taken by Italian soldiers stationed in Ethiopia, setting the images on a historical timeline, and attempting to understand what was happening in the background, in that area, when the photo was shot. Incrementally, slowly, another history emerged. With that second history came a new voice: insistent, demanding to be heard, often contradictory of a narrative that one of the characters was trying to establish. I went with that and gave myself the freedom to develop a new structure, a new way of telling.

3. Where, when, and how often do you write?
I wrote this book at my desk, at many desks across several cities in New York and throughout the United States. I wrote this in different parts of Europe and in Ethiopia. I wrote at night after teaching and on weekends. I isolated myself for extended days and weeks and wrote. I wrote every day and, on those days when I had no time, I kept a small notebook for notes. I didn’t always feel like writing but I still made myself sit down and do it. I practiced discipline and worked towards inspiration.

4. What was the most unexpected thing about the publication process?
That moment when you understand that the manuscript is now in other hands at your publisher’s office and they are going to read it for other ways to bring the story alive. For so many years, it had just been me and this book.

5. What are you reading right now?
I just finished Salman Rushdie’s Quichotte, which is fantastic. I’m reading Tishani Doshi’s beautiful and evocative Small Days and Nights, which comes out in January. I haven’t let Mona Eltahawy’s The Seven Necessary Sins for Women and Girls out of my sight; it’s riveting and absolutely brilliant. And I am completely engrossed in Jaquira Díaz’s stunning memoir, Ordinary Girls. It’s breathtakingly good.

6. Which author, in your opinion, deserves wider recognition?
The late Dasa Drndic, who is getting wider recognition now after her death, but should be read by many more. Her book Trieste is spectacular, as are her others. Emmanuel Iduma has been breaking new ground in art criticism, fiction, and nonfiction and doing so well. His work is incredible. Read A Stranger’s Pose.

7. What is one thing that your agent or editor told you during the process of publishing this book that stuck with you?
When my very patient editor said, “Now I know why it took you so long to write this book.” It made all the years of frustration and fatigue and leaps of faith worth it.

8. What is the biggest impediment to your writing life?
My human need for sleep.

9. If you could go back in time and talk to the earlier you, before you started The Shadow King, what would you say?
Hang in there, kid. This is going to take a while but don’t give up. Be fearless.

10. What’s the best piece of writing advice you’ve ever heard?
From the late Dasa Drndic, who said to me: “Fuck story.” She meant, forget what you think you want to say. Forget what you know. Look at form, find the voice, let it roam freely and follow it. It will tell you the narrative.

“I’ve learned that writing is not for the impatient.” —Crystal Hana Kim, author of If You Leave Me