This week’s installment of Ten Questions features Crystal Hana Kim, whose novel, If You Leave Me, is out in paperback today from William Morrow. This intergenerational saga is set in motion when sixteen-year-old Haemi Lee, forced to flee with her mother and brother to a refugee camp in Busan, South Korea, in 1951, decides to find a husband in order to ensure the safety of her family. Her decision to marry Jisoo despite her feelings for his cousin Kyunghwan, has repercussions that are felt generations later. If You Leave Me was named a best book of 2018 by the Washington Post, ALA Booklist, Cosmopolitan, and others. It was also longlisted for the Center for Fiction First Novel Prize. Kim’s work has been published in Elle Magazine, the Paris Review, the Washington Post, and elsewhere. She holds an MFA from Columbia University and an MSEd from Hunter College. She is a Teach For America alum and has taught elementary school, high school, and collegiate writing. She is a contributing editor at Apogee Journal. 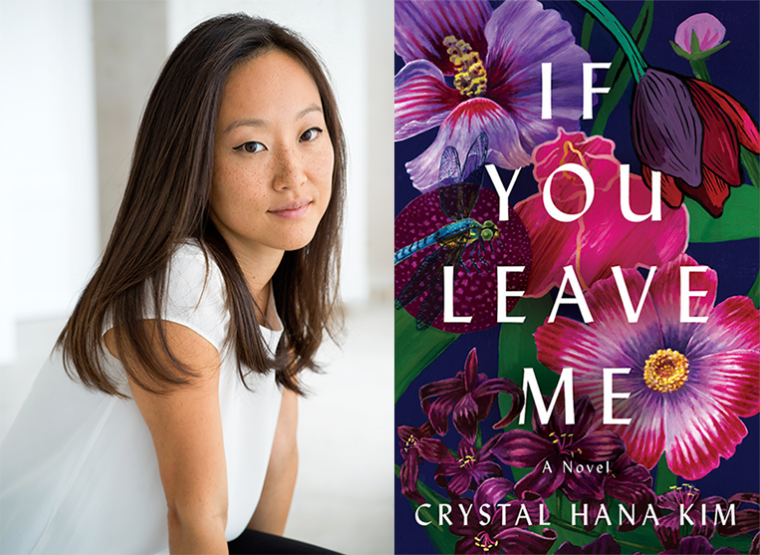 Crystal Hana Kim, author of If You Leave Me.

1. How long did it take you to write If You Leave Me?
When I began my MFA studies in 2011, I started experimenting with different voices and perspectives. This is when I created the main characters Haemi, Solee, Kyunghwan, Jisoo, and Hyunki. At that point, I didn’t think I could write a novel yet; there was too much to learn. An interconnected short story collection sounded more attainable, so that’s the form I decided on. But in 2014, in my last semester of the MFA, my teacher Ben Metcalf convinced me to tear the collection apart and create a novel about the first generation of characters. I think it took me until early 2016 to finish the book. Then I had to find an agent, and then of course an editor, so my novel didn’t come out until August 2018. I’ve learned that writing is not for the impatient.

2. What was the most challenging thing about writing the book?
Maintaining the confidence to continue. In graduate school, I received constant feedback and encouragement about my work. But in the years after, without the structure of school, I felt as if I was in a free fall. There were days and weeks when I wasn’t sure if my writing was good enough—and by extension, if I was good enough. Self-doubt is always the most challenging for writers, isn’t it? All the research I had to do for the book is a close second though.

3. Where, when, and how often do you write?
My writing schedule fluctuates wildly depending on what my sources of income are at the moment. Right now, I’m transitioning from working in the nonprofit space to freelancing and teaching, which is less stable but also allows for more writing time. I like to write at home at my desk. I take lots of notes by hand but write the actual manuscript on my laptop. Sometimes I listen to binaural beats or ocean waves. Sometimes I just put in headphones and listen to nothing. I often use the Freedom app to block out the internet because I am compulsive about checking e-mail.

4. What was the most unexpected thing about the publication process?
The nerves! Everyone told me publishing is a terrifying process, but I’m not an anxious person so I thought I’d be fine. I was wrong. If You Leave Me is fictional, but I still felt so vulnerable and tender, as if a layer of my skin had been peeled off.

This sounds naïve, but another unexpected thing was hearing from so many different types of readers. As a debut author without a lot of prior publications, I honestly wondered who would read my book. But then I heard from Korean Americans, immigrants from other countries, war veterans, and mothers who had experienced postpartum depression. The variety of responses was overwhelming in the best way.

5. What are you reading right now?
A Pale View of the Hills by Kazuo Ishiguro. It’s eerie and haunting. I’m worried I’ll get nightmares. The next book on my list is the short story anthology Everyday People, edited by Jennifer Baker.

6. Which author, in your opinion, deserves wider recognition?
I love Mercè Rodoreda’s work. She was a prolific Catalan author. I’d recommend starting with The Time of the Doves. I also love the Library of Korean Literature’s translated books. I recently discovered Seo Hajin’s short story collection A Good Family. Each of her stories explores the meaning of family and the secrets we keep from each other in stark, slightly strange, intelligent prose.

7. Would you recommend writers pursue an MFA?
This is a tough question because there’s no right answer. The MFA is what you make of it. You’ll be provided with time, community, and feedback. Hopefully, you’ll also learn to read more widely, to think critically, to teach in a collegiate setting, and form lasting friendships with other writers. But the actually writing, which is the most important part, is up to you. I will say that I always tell my students that it’s not worth going into debt over an MFA.

8. What is the biggest impediment to your writing life?
Money and time, which are, of course, related.

9. What is one thing you might change about the writing community or publishing industry?
We need more diversity across the spectrum, meaning in terms of race, sexuality, gender, class, nationality, ability. This needs to happen behind the scenes in the publishing world, too. I’m seeing more diverse writers—particularly in the YA world—but I don’t think there’s been as much change in editors, publicists, heads of publishing, etc. Also, we should do away with blurbs. Asking for blurbs is the worst.

10. What’s the best piece of writing advice you’ve ever heard?
I’ve been thinking about Toni Morrison a lot these days and I recently found this quote via Jamel Brinkley. Here’s what Toni said about character, which is helping me as I draft my second novel: “All the characters in my book, whether they are successful or not, they’re all pushed into that place where all the definitions of themselves are suspicious…. The circumstances have to be invented so that the characters…have to simply be stripped down, and made very lean, so that you can see who you are.”

One more piece of advice, from James Baldwin, which I have taped above my desk: “You want to write a sentence as clean as a bone.”

The desire to tell stories is one thing; finding the stories you want to tell is something else entirely.

“I ride a commuter train forty minutes each way to work. That’s when I write. Having to come to the page twice a day for short bursts gets me writing very fast; there’s very little wasted time. I’ve never been so productive in my life.” —...

“Throw pencils, get mad, take a walk. Swear off poetry, read a chapter of a post-apocalyptic novel, wash the dishes. Feel better? Back to writing.” —Karen Skolfield, author of Battle Dress

“Writers are artists, which means that...we have to work hard to protect our creative time, our imaginations, in the midst of all the other parts of our lives.” —Jess Row, author of White Flights