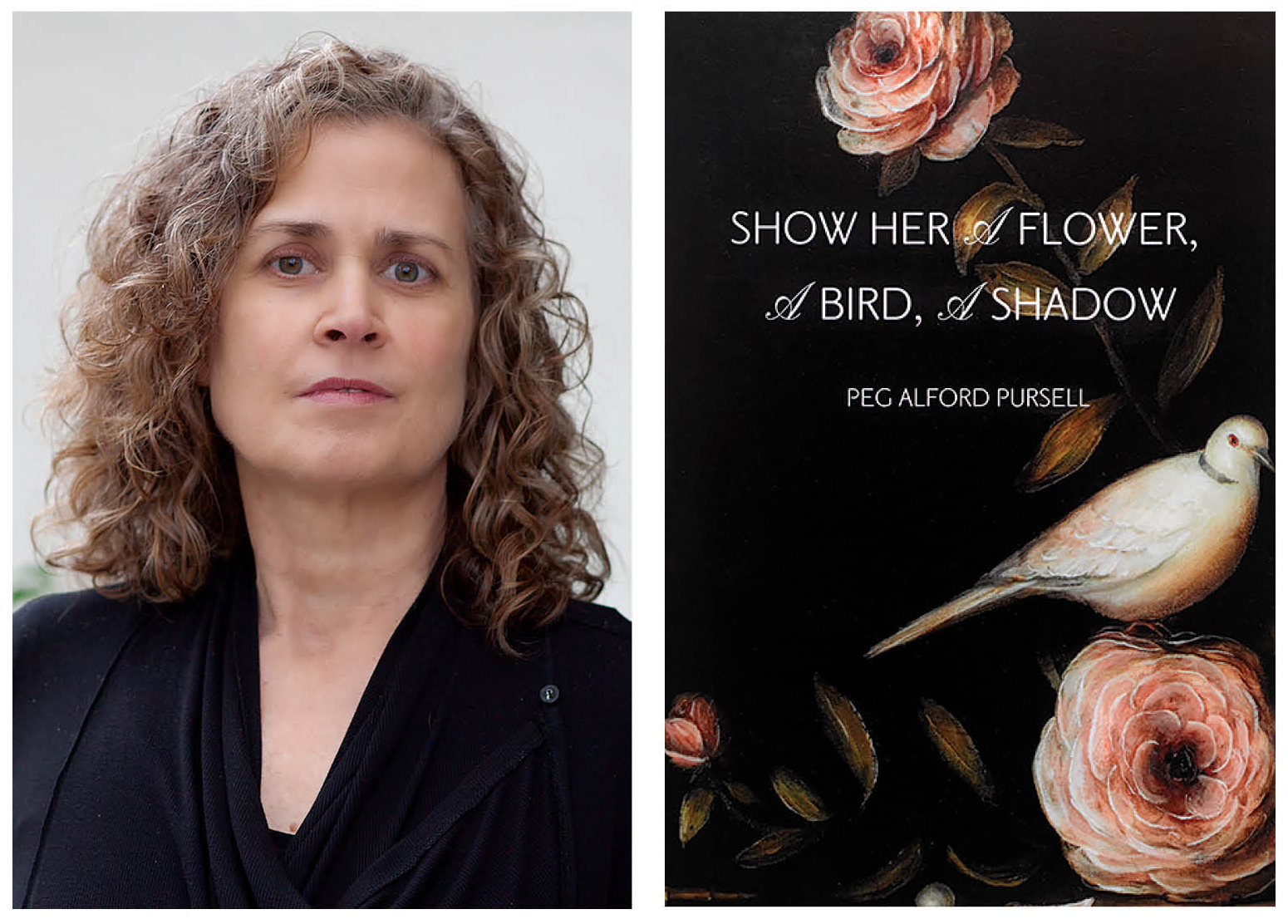 Show Her a Flower, a Bird, a Shadow
By Peg Alford Pursell

Day of the Dead

When I was a child, Day of the Dead meant sugar skulls, staying up past midnight, marigolds, burning copal, blazing votives. I didn’t recognize any of the faces in the photographs on the altar. Now I have my own dead—and no sweet bread, hot wax, or tequila to lure them, no fancy papel picado.

The dead come anyway, in fragments, perforated memories. My grandmother wearing a man’s fedora, a secret greeting card folded into her dress pocket. My grandfather, who burned basura in his basement fireplace sending obscene odors throughout the neighborhood, whose last act was to eat a bowl of strawberry ice cream in the middle of the night. The boy I smoked pot with behind the brick chimney in the attic of his parents’ home, wrapped up together in his sleeping bag. He confessed he had no plan for after graduation, and he laughed, and he never needed the plan. The stillborn girl, who looked like a baby bird with bulging eyes, curled in a nest under the acacia. The man I’d once thought was the one, who wasn’t, and whom I couldn’t live with once I understood that, who on a tear of amphetamines put a gun to his head.

The girl arrived in a wooden crate, fighting the space for air with moths. Her belly swollen, yet empty. Tiny mouth askew. I once loved the smell of sawdust. He takes her down the hall. His wedding ring glimmers. They retreat to the spare room with shelves of unlabeled green bottles, the high window of colored glass glinting like blood. I go outside to study. Broken pieces of language from the guidebook. Sit on the curb in the baking light. At my side the pocketbook he got me at the farmers’ market, a diamond pattern etched into the strap. I try to feel only my concentration, desire for success. In spite of the heat, my mind frozen. The bird’s white wings blur in the sun.

Show her a flower, a bird, a shadow, and she will show you what is simultaneously forming and falling apart. What is both witness and sign along the way on this rough earth, a shell already cracked. She’d thought she could raise a child with only minimal intercession but now, as she was being driven to the hotel, found herself looking up at the ceiling of the car, mumbling a quiet prayer. Her daughter was like her: too quick to do everything.

The girl’s father had been someone she once knew, or thought she had, a man who laid her in repose on the bed and gave her waist a tender squeeze before arranging her hands on top of her, placing the right over the left, palm over knuckles. He studied her in that corpse-like pose, letting his glass with the float of lime warm in his hand, before his mouth captured hers.

She’d come in from that life long ago, covered child rearing herself. To say that she had managed well would be to deny the truth of the flower, the bird, the shadow.

She would try to give her daughter a talk, though surely the young woman too understood there is nothing available to speech, no wild and strange language that can reveal the organizing principle that pulls the body toward its center. This trivial fact of human nature. Composition and decomposition. Of every petal, feather, and light particle.

But it was only kindness, necessary kindness, that she try. And so they were scheduled to meet in the hotel by the harbor, a place where she thought the sea would soothe her, where she would set out to speak in the way gondoliers push their boats away from the Venetian docks.

A girl in trouble: the expression implied that the girl was in danger, contained her own peril. She would make clear to her daughter that this wasn’t so. Now you won’t likely become a famous dancer in Russia, she would say to her girl, and they would share a small smile at the idea that her daughter might have ever entertained such an aspiration.

What her daughter had ever wanted she truly didn’t know, and that knowledge was contained within her, a small sunken place, heavy and aching.

It was not too late to learn, she reassured herself, but was this simply another beautiful idea she was still trying to believe? And if so, where was the love in that?

The car pulled up in front of the hotel with its grand façade. She wanted to cry out, fly toward the glittering ocean, a rose gripped in her hands, petals littering her shadow as it disintegrated over the deep waters.

to be the girl who came into the restaurant where her family waited to celebrate her and when she entered they each would say congratulations.

And many would mean it.

I Should Let You Go

She phoned him at work just because, no real reason. It had simply occurred to her to give him a call like they used to do when they were new. To hear your voice, they’d say by way of explanation. The kitchen, early morning, was sunny, and lightened her spirits; she’d woken up in a mood, something wrong but nothing really. They had no real problems.

She dialed and poured a glass of water and stood waiting for him to answer, looking out the window at the tender magnolia blooms close to the glass, the sky behind so blue it could crack.

He answered, his voice sounding rushed and, when he heard that nothing was wrong, quizzical. He answered her questions. Yes, his morning was going fine, busy, too busy, he was glad she called. The searching tone infected his voice.

She said again, No real reason. Her eyes returned to the magnolia, a lump forming in her throat.

He gave a short laugh, evidently talking to someone nearby, and she said she should let him go, and he said, no, no, he was just walking over to the café for another cup of coffee to put down his gullet.

She wished they talked more kindly about themselves. To put down my gullet was an expression that had come from her mother. Get some food down your gullet.

Harsh, he agreed. She swallowed. She said she supposed there was some love in the words, as in reverse psychology. She tried to tease out the idea as she talked, and he laughed a little louder. Someone else on his end laughed, too.

She could try to explain that her mother wasn’t able to show softness, not even in her language, that her mother didn’t want anyone to know how much she cared. It seemed that this could be true; she wanted it to be.

His voice was loud, asking, What did you say, hello? Are you still there? When we met I thought, he said, lowering his voice, she is the biggest small person in the world. You walk into the room and fill it up.

This was catching love in words, a kind of contagion, because she wanted to believe what he believed, and knew it could grow and, if they were lucky, not like a sickness. She could go on with this thinking, her throat aching, or they could say goodbye. She filled her body with breath, and turned away from the window.

The coldest summer in forty-odd years, earthquakes in places there’d never been, and her mother dying in a hospital bed across the country. She bought plane tickets. He went to fill up the car. She waited by the curb for him to drive up and take them to the airport. Waxy juniper shrubs set in tired gray bark chips lined the sidewalk. Something about the bushes. They could sense lost causes. The car was waiting now, the impatient engine exciting the air, warming her legs. What would it be to get in and simply ride hour after hour, no destination?

They arrived in the middle of the night at the house of her sister who lived near the hospital. No one was awake, but on the phone earlier her sister had directed her to take the room with the unmarked black door just at the head of the stairs.

Inside smelled vaguely of cedar and cinnamon. On the bureau top rested a matchbook with an image of a pineapple on it above the name of an inn in Costa Rica. Next to the matches, an ancient volume of Mother Goose.

She knew she should sleep before it was time to see her mother. But she found an eyelash on her pillow and sleep felt impossible. She sat in the chair by the window, listening for snores, for any sounds that might mark the whereabouts of the others in the house. He stretched out across the top of the covers and propped his head on his hand. Let’s take a shower, he suggested, and because she ultimately could find no real objection, she agreed.

Divided, they didn’t understand the rules that kept them separate. It was something to do with the swirling waters of the world of the dead. Of the dying, he said. Steam rose and water slid down their bodies.

She stepped out from the shower onto the gold-rimmed mat, where he waited holding out a towel. Droplets of water clung to the hair on his chest above the towel wound around his waist. He made appreciative noises in his throat as he eyed her nakedness.

She avoided looking at his face to see what expression would win there. She didn’t want to share her body. She had shared enough of it already. Her mother’s body: isn’t that what it was saying?

He stepped away from her and finished drying. Light began to crack through the gap under the window blind. She raised the blind and saw a large bird leave the limb of the tree beside the glass, no doubt startled by her human movement.

The bird, species unknown, flapped his leathery-looking wings, perhaps in a panic, before it dropped. She opened the window and looked out.

At the sound she released he rushed to her side.

They stood, heads out the window, looking down at the patio bricks where the fallen bird lay still. They didn’t speak of what would happen next.