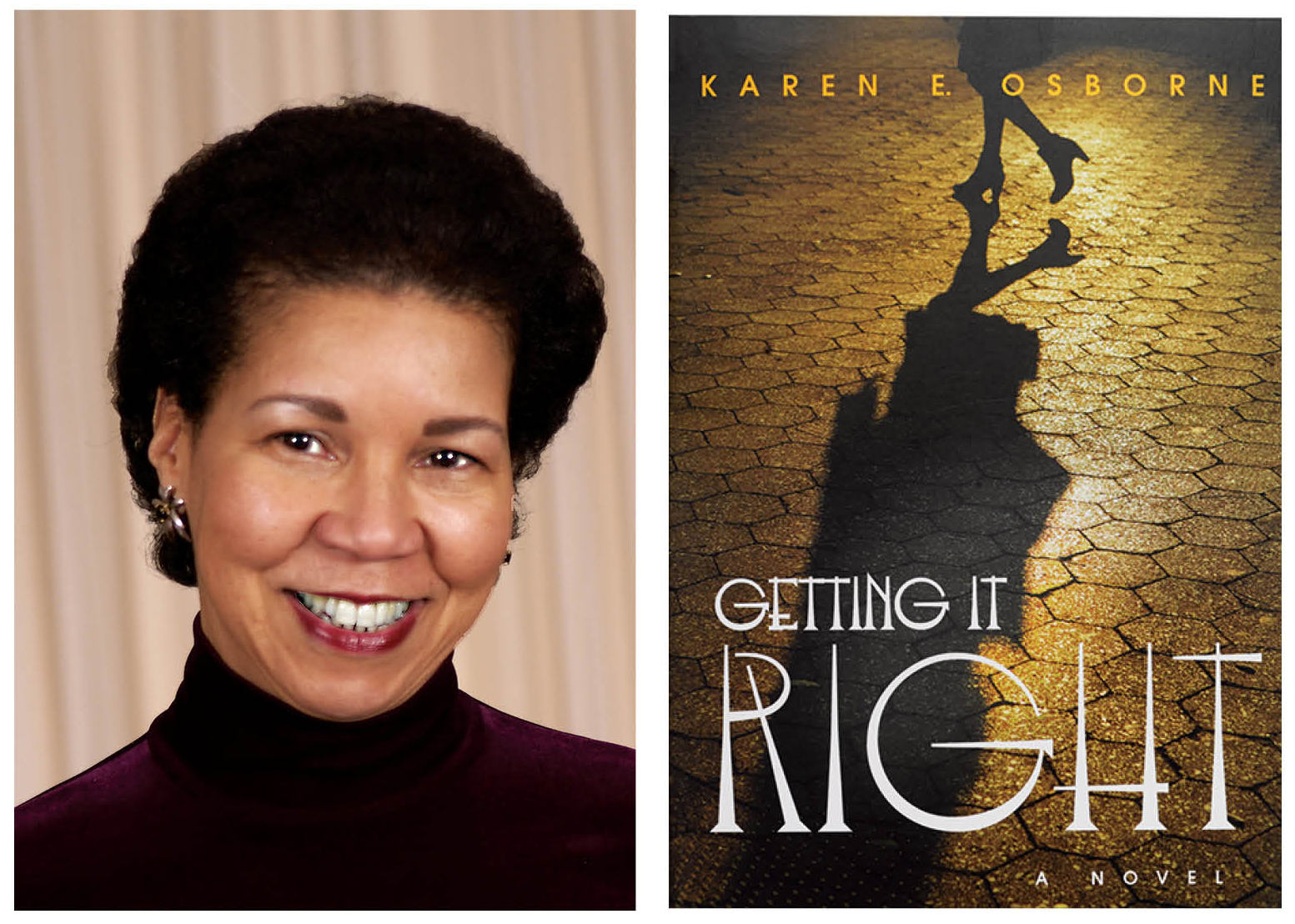 Getting It Right
By Karen E. Osborne

Alex was trying to understand. A love child, like in some sleazy romance novel? “Tell me.”

Her father shifted, the bedsheets caught between his legs. “It was years ago. Your mother didn’t like to travel and traveling was all I did. I mean, there were no kids, she wasn’t working.”

He sounded accusatory, the way he often did when he spoke about her mother.

“Anyway, in those days DC was one of my regular stops.”

His cough came back full force. Alex searched for something to help him, locating a cup of water with a straw and placing the tip against his lower lip. Several sips later, the coughing subsided, but a sour smell took its place.

He mopped his eyes. “The long and short of it is, I met someone and we fell in love.”

With his peripheral vision, he peered at Alex, who was trying hard to keep her expression neutral. This was not the sort of thing a child, even a grown one, should hear.

She gave him an understanding smile—it was fake, but it did the job.

“She was young and not sophisticated, not well-traveled, I guess I mean. But she was also smart, funny, the kind of pretty that grew on you. We laughed all the time . . .” He trailed off. “Not that I didn’t love your mother. I did. I do.”

Alex squirmed and plucked the corners of the sheet.

“She got pregnant, and she wouldn’t have an abortion.”

Again, he peered at Alex out of the corner of his eye, but she lowered hers.

“I begged her, but she was adamant—a church-going woman.” A mini shrug. “Adoption seemed like the next best choice.”

She finally looked up. “Who, exactly?” The woman? Both of them?

“The girl.” His voice dropped an octave. “My other daughter.”

“I know this is a lot to ask.” He made it sound as if it weren’t, as if he were waiting for her to deny the craziness of the request. “The last address I have is her grandmother’s in the Bronx.”

Find some kid he conceived while cheating on her mother? A childhood rage welled up. What she couldn’t understand then, and still couldn’t, was why her parents did this to her. What about her needs? What about Vanessa and Pigeon? How was he going to make it right for them? She pushed these thoughts down, swallowing an all-too-familiar bitter brew. New thought: her mother would go apeshit if she knew. If Alex helped him, she would have to keep it under her mother’s exceptional radar.

Her father sank back and closed his eyes. Alex contemplated what she’d just heard. Her mother had accused him of cheating with the regularity of the seasons, and apparently she was right.

Alex vividly remembered the first time her mother had threatened to kill herself. How old was Alex then, ten? Vanessa must have been six and Monica—known as Pigeon—would have been three.

A trip to France had stretched into weeks, and her mother was sure there was another woman . . . again. Wrapped in an old terry-cloth robe, her small hands peeked out of oversized sleeves.

Screaming into the phone, she held a serrated knife to her wrist. “I’ll do it right in front of your precious daughters—don’t think I won’t.” Blood oozed from beneath the knife’s teeth. “I know you’re with some whore. You think your girls don’t know? You think Alexandra is too young to understand your mongrel ways? Tell him, Alex.” She thrust the phone in her daughter’s face. “Tell him you’re with me and that I’ve cut myself.”

“Call Aunt Peggy, and take care of the girls until she gets there. Okay, kitten? Can you be a brave girl for Daddy?”

Alex said yes and gave the phone back to her mother.

With a dish towel, her mother staunched the blood flow. Tears creased her makeup. She slipped to the floor, stringy hair damp with perspiration falling into her eyes, the knife and phone clattering on the tiles. That’s when Pigeon walked in.

“Why’s Mommy crying?” Her teddy bear tucked under her arm, she pulled a frayed blanket behind her.

Aunty Peggy and Alex were a tag team.

Almost a year later, Vanessa, who even back then seemed weary of the family dramas, had interrupted Alex studying in her room: “Mommy’s using bad words and littering.”

Alex composed her calmest expression and strode into her parents’ bedroom. The scene was comical today, but not at the time. Her mother stood in her silk nightgown with Pigeon by her side, frosty air rippling the curtains. Mouth agape, Alex watched her mother tear through her husband’s suits with a butcher knife, cutting off the arms of the jackets, slicing the legs and crotches of the pants, and then launching them out the window. Between each thrust, her mother lifted her thumb-sucking youngest daughter, and together they watched the garments sail down to the lawn below.

After her mother hand flung the last shreds, Alex grabbed Pigeon, hustled her sisters out of the room, put them to bed, and once again called Aunt Peggy. By the time Peggy arrived, dressed in a mink coat over a size-sixteen nightgown, Alex and her mother were sitting at the kitchen table pretending to eat canned tomato soup gone cold. Peggy nodded her head toward Alex and joined them—she neither asked a question nor offered a remedy.

Worth’s cough brought Alex out of her memories. She wasn’t ten or eleven anymore; she was thirty, with her own almost-successful marketing company. Saying no was an option.

“What’s this person’s name?” she asked.

“Kara Lawrence.” He lifted his body up on his elbows. “I don’t know her adopted name.”

He gave her our name?

“It shouldn’t be too hard to find her.”

Why should she do this?

“I told Martin Dawes to expect your call.” Mr. Dawes was the very proper family lawyer: hooded eyes, tight-collared shirts, subdued ties, sparse dark hair clipped short. “He can give you her grandmother’s name and address.”

“I need you to. I want her to be receptive, to know that I’m sincere. That I care.”

“I have to think about this, Daddy.”

Another coughing spasm wracked his chest. “Better not take too long.”

Alex walked out of the CCU, her head down and shoulders slumped.

“Well?” Her mother approached her. “What did he want?” She was already suspicious.

“To see you.” In truth, he had drifted into a fitful sleep, but Alex needed to speak with Aunt Peggy alone.

The moment her mother was out of earshot, Alex asked, “Did you know he had another child?”

Aunt Peggy’s lower lip quivered. “I knew.” She tugged at her suit jacket. “What did he tell you?”

“That he has an illegitimate child out there somewhere. He sounded sad and ashamed—well, maybe ashamed. In a way, I think he blames Mom.” Alex heaved her shoulders. “I think he was more embarrassed to tell me than about what he did.” She looked at Peggy for confirmation but she said nothing. “She was adopted and now,” her voice rose, “he wants me to find her.”

“I never heard any of this from your father. You’d think he would have told me something so important.”

“He was probably trying to protect you.”

“He made a mistake and did what he thought best. It’s not like he could bring her home to Mom.” As a kid, Alex envied her friends whose fathers were home every evening, who did what her dad did on those rare times he was around: kissed their children goodnight, read them stories, listened to their prayers.

“Wait, if Daddy never told you, how did you find out?”

“From your mother, of course.”

“Mom knows?” Alex was incredulous. She had thought her mother had no boundaries when it came to complaining to Alex about her father, but obviously she had kept something hidden.

“She said he paid child support for years. That’s how she discovered his grand deception.” Peggy pulled out a hankie and patted her throat. Specks of linen caught in the creases. “Evidently, she found e-mails between your father and that lawyer, Dawes somebody, trying to find evidence of some new misdeed, no doubt.”

“She never said anything to me.”

“Remember when she took a whole bottle of vitamin pills and ended up in the hospital with acute diarrhea?”

Alex closed her eyes for a second.

“You remember, you were maybe six. She had run out of Valium and tried to kill herself on One A Days.”

Alex sat down next to Peggy. She chuckled, but soon it blossomed into a full-throated, hysterical roar. She didn’t remember the vitamin suicide, but it sounded just like something her mother would do. “Oh, Aunt Peggy, what a mess we are.”

“I’m not sure there is such a thing.”

“He wants me to find her, this other daughter, before he dies.” She quickly added, “Of course, he’s not going to die.”

The two women sat in silence for several minutes. Every few seconds, Peggy patted Alex’s leg or rubbed her back. Then something else occurred to Alex. She peered at her father’s only sibling. “Did you say he paid child support for years?”

“I thought they put her up for adoption.”

“Oh, that was much later. No, he did the responsible thing and sent the woman money for the child’s education and upkeep. Your mother found the e-mails and called that lawyer.”

“Martin Dawes. He’s supposed to help me find her.”

“He was the one who explained everything.”

“Her mother died and Daddy thought adoption was best?”

“How else could I say it? Jeez, Aunt Peggy.” Alex stood up and paced. “What do you know about her, the kid?” From the expression on her aunt’s face, Alex knew she sounded angry again. “Sorry, I didn’t mean to yell at you. This is just so upsetting.”

“Of course it is. Shameful. Anyway, I don’t know anything more.”

“All he told me is that her name is Kara and she was born in DC. You have to know something else about her.”

“Your mother never gave me any details.” Peggy pushed her glasses up the bridge of her nose. “It’s not like he didn’t have tons of affairs from the day they were married.”

Other women from day one? Alex sat down. Did he ever even love her mother?

“I do know that the child was born the same year you were, and that infuriated your mother even more than the affair.”

How much worse could this story get?

Peggy pursed her lips and continued: “She’s black—African American, I guess I’m supposed to say, you know, to be politically correct.” She made air-quotes around the words.

Alex cringed. Both Aunt Peggy and her mother had a list of people they didn’t like. When Alex brought home friends from school who were Asian, Latina, or black, she lived in dread that either would say something stupid, and they usually did. After a while, Alex stopped inviting friends over.

The photograph in the desk drawer flashed into Alex’s mind; the one of the black woman and the little girl with honeyed skin and long braids. “Did Daddy visit them? Did he ever take me?”

That woman seemed happy in the picture, and her father was laughing. There was something familiar about the girl: her wide-set eyes, shaped like Alex’s, just a different color—Alex’s were violet like her father’s, Kara’s were brownish-gold. Even her eyebrows arched like Alex’s, and the high cheekbones were definitely a Lawrence trait, as if someone had snuck into a Native American’s bed back in the day.

Peggy cocked her head to one side. “What are you going to do?”

“Find her, I guess,” Alex replied, surprising herself. Then she realized her response was no surprise at all. “He’s counting on me.”