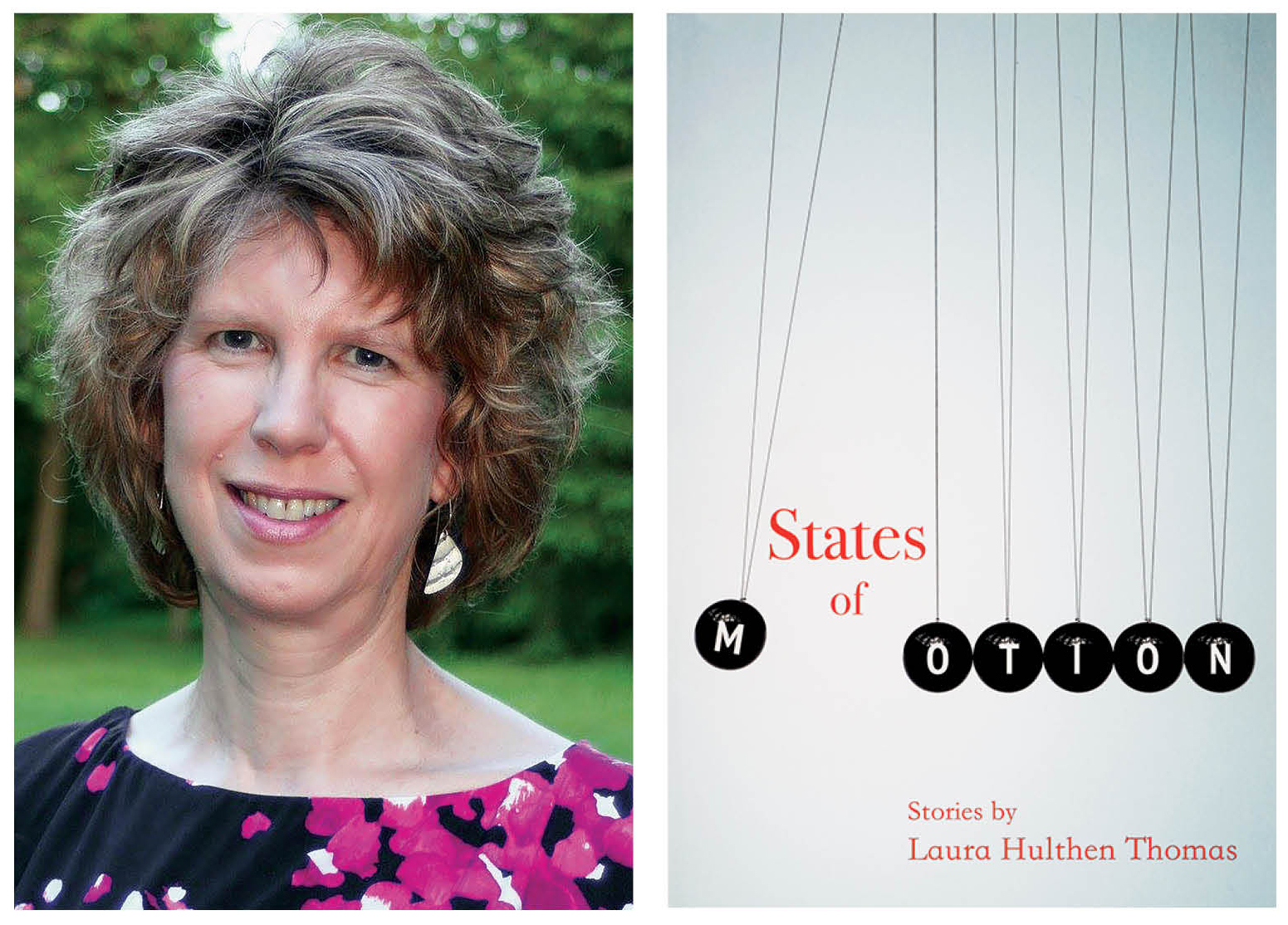 The body in the road had become a reliable kindness. Tucked nimbly in the sharp dip on Judd Road just past the hairpin curve out of town, the body could be a trick, a blink, exhaustion’s shadow. A chalky moon lit the curve. Beyond the light’s rim, darkness poured into the hollow’s bleak drop. Just in time again, Perry swerved off the road. He parked under the near-headless birch and aspen, canopies shorn wide for the power lines. The shoulder was choked so tightly with brush that Perry’s rusted truck bed jutting into the lane became the obstacle the next motorist might see too late. Perry’s door swung open almost to the head, which didn’t, at first, flinch. Maybe this was the night someone else had finally hit the body.

A harsh wind cut through the bare branches. No buffer now against the chill. Perry’s jacket might as well be his skin. Had the lying in begun before the cold set and the leaves dropped? Perry couldn’t recall when he’d first come upon this body. After the girls had been discovered last month, this he knew. But he couldn’t say when exactly these encounters became routine, and then, necessary.

The body wasn’t waiting for him in that hollow every night. Perry never asked the questions he should ask; that if the body appeared on some nights, why not every night? What erratic calculus of despair determined a night’s decision to lie in wait for collision’s bliss?

Perry was awaiting positive identification, which the authorities told him might come tomorrow. A foregone conclusion, since he and the Other Family had immediately identified the girls’ clothes. Remarkably well preserved after twenty years underwater. Elsa’s dressy blouse was laid out on the authorities’ steel table, sleeves thrown out at right angles as if frozen in one of her impulsive hugs. Her denim cutoffs lay below the blouse, a strip of steel gleaming in the gap between hem and waistband like a prosthetic belly. The blouse’s frilly scallops were fringed with mud. Dirt blotted the sleeves. Mud stains dotted the pearly buttons. Not a single button was missing. Not a speck of the mud on the blouse or cut-offs turned out to be aged blood, so the authorities finally knew to rule out foul play. A technician would have removed this blouse delicately from his daughter’s skeleton. The cut-offs would have been pulled cautiously from her hips to avoid dislodging joints, shattering evidence. The silver glittering sandals with the Roman straps, now lake-bed brown with the buckles flaking rust, would have been carefully guided from each foot’s frail boney accordion.

The clothes were pinned and air-dried to stiff, unnatural shapes before Perry and the Other Family were summoned. The living knew that, like the DNA testing that would be compared against samples from their own bodies, identifying the clothes was a formality. The car, a ‘71 Mustang hauled up from the shriveled lake, was well known as the car Perry had given Elsa for her sixteenth birthday. The water level hadn’t dipped so low in a century. Drought had dried up the wells on his out of town properties but had given Perry his daughter back.

He didn’t know how the Other Family felt about closure but he wasn’t about to hand over last hope on a platter to the authorities. He’d studied the items as if he’d never seen these clothes, as if the unearthed car wasn’t his well-known ‘71 Mustang with two female bodies strapped in the front seats, a mangled rear tire that must have blown and hurtled the car off the bridge. He told the authorities he couldn’t positively identify this clothing. Hadn’t too much time passed to be certain? Some items were missing, too. Intimate things. Were the authorities keeping Elsa’s undergarments from his sight out of delicacy? The authorities hadn’t recovered her cheap silver earrings either, but Perry didn’t notice the baubles weren’t among these personal remains.

He was not present when the Other Family identified their daughter’s clothing so he never would know if they’d given up their hope easily, even gratefully.

Perry slammed the car door. The body stirred at the sound. Alive, still a man. Perry helped him to his feet. Wrapped his coat around the man’s gaunt shoulders, tucked him gently into the passenger seat. Hurrying for no good reason. If the man was in a hurry to live, he’d have risen on his own. If the man was in a hurry to die, he wouldn’t choose to lie on a road rarely driven after dark. But Perry felt the urgency of their time together. Moving the truck out of the next motorist’s way. Protecting the man from the cold and the country night’s sticky ink. Perry thought that regard for this man’s welfare made him hurry, but the rush was meant to beat the clock on Perry’s dead heart. He could kill this man as easily as he could rescue him, because, given time, didn’t reputation always become character?

This man was not yet Perry’s age, but not young enough to be reckless, to have not thought things through. But, too, not ready to die. He would take to Perry’s care, is how Perry knew. Put his fingers to the dashboard vents. Thaw out, smile a bit, relax into Perry’s coat. He would never begin a conversation and he didn’t tonight, either. Decisions could be made about what to find out and what to leave be.

Perry pulled onto Judd Road. The old F150’s engine rattled now like a lingering cough, but there wasn’t a thing wrong with it. Tonight the man couldn’t seem to get warm. He was fidgety, fretful. He kept rubbing his hands in front of the heater vents, then sticking his fingers between the seat cushions, or in his lap. His smile was one of those Perry envied, radiant and straight. A few facts, released stingily, during their first rides together. The man lived with his parents. They did not know of the roadway roulette. The man would prefer Perry run him over than take him back home.

Perry nursed assumptions: an alcoholic, an unstable, a man diverted from the course of reason. But he did not reek of poisons, did not appear drugged. Perhaps he was one of those users who thrived on fooling his family. Once Perry had looked up the Marion Road address to find the number unlisted, no name attached to the property. He’d poked a bit for the man’s identity. Hadn’t been too diligent. There were certain benefits to the man remaining a stranger.

Perry usually accepted the man’s silences, which he interpreted as invitations to fill, but there came a point when he wanted to crowbar some answers.

--If you want to die, why not choose a busier road?

The man blew air into his cupped palms as if about to whistle.

--Out here, where else could I walk to?

The wind picked up, whistled through the F150’s aging window seals. Moonlight shimmered on the pavement like an early frost. The man pointed out the way home even though Perry knew the route, a left down Marion, one of those narrow, single lane dirt roads. There the jarring washboards chiseled by long-ago summer rains would fragment their conversation, save Perry the burden of finding out why this man sought to die.

Denise was the other girl’s name. Perry didn’t know what she was wearing the night the girls disappeared. He’d barely spoken to Elsa on her way out, which was why, he told the authorities, he couldn’t say for certain about the clothes. Back when the authorities had questioned him—closely, Perry was the sole suspect—he described Elsa’s glittery sandals, which he remembered flashing on the drab living room carpet. He didn’t tell the authorities how he’d frowned over the cut-offs and dressy blouse. The clingy denim rode too high on her thighs. The Sunday Best top seemed like an insult to Sunday paired with those shorts, and she’d buttoned the blouse up tight to her slender neck. Not a trace of flesh until those long legs, as if she was low-balling the flirtation and he didn’t like her going to a teen party at the gravel pit in the first place. She was wearing earrings, silver dangling baubles that flashed like grins as she told him goodbye.

Should have driven the girls himself, he’d always suffer this guilt. A straight shot down Judd Road, across the bridge over the lake that had taken their lives. He’d have watched them walk up the gravel path to the ridge where the other kids were stoking the bonfire and pulling on beers, shadows against flames on a hot starless night. He’d have noted what Denise was wearing so he could keep tabs on both girls. Parked down the road within sight of the fire. All the way down the path, Elsa’s silver sandals would have twinkled on her slender ankles. He’d craved this vision over the years, her glittering feet like sparklers’ tails tethered to his vigilance. This vision sometimes relieved him from his doomed wonder about why she’d left, and where she’d gone, and when she might return to forgive him for some offense he wouldn’t know to call a crime.

Maybe Denise knew, and that’s why they’d grown close that year. Perry had known Denise only a bit, mostly by the loud laughing voice that overtopped Elsa’s quiet murmur. He’d wondered afterwards whether Elsa’s soft voice was not her natural tone after all, but muted so he wouldn’t hear what the girls were planning on that hot summer’s night. Pretend to go to a party and just keep driving down Judd, which bisected Moon, which doubled back to Michigan Avenue to I-94. Once on the interstate, the girls could vanish before anyone knew to look for them. It was a good plan. It could be done.

Over time, Perry grew to love Elsa’s flight as he loved her. So what if she’d never called? Showed her pluck. She’d made it to a better place, a place he wasn’t meant to find.

The Other Family was convinced that a killer had snatched the girls on Judd Road. After Perry’s arrest, the Other Family was convinced this killer was Perry. Maybe they’d thought him guilty right up until the moment the wheels unexpectedly crested the lake’s murky surface, so near the places that had been searched so methodically, and then hopelessly. Maybe they needed to identify Denise’s clothes and confirm the DNA match to see in Perry the father who had lost what they had lost, who suffered nightmares, spun wild stories, prayed and raged and wept dry as they had. He wondered whether they preferred their beliefs about Perry to the truth, as he preferred the fates he’d concocted for Elsa. Perhaps he would turn out to have been their last hope. Perhaps his killing of the girls would be seen, now, as more sensible than this discovery; the girls’ cruel suspension in gloomy waters, near to the bridge, near to their families, close and unfound until a freak disruption in the rainfall’s seasonal pattern had revealed them.

Perry’s daughter was thirty-six when she was found, had been dead longer than she’d been alive, and he did not want that corpse, he didn’t.