This week’s installment of Ten Questions features Megan Giddings, whose second novel, The Women Could Fly, is out today from Amistad. In this dystopian tale, witches coexist with the general population, but they live a precarious existence under strict government oversight. Protagonist Josephine “Jo” Thomas is almost twenty-eight years old, the age when unmarried women must register with the Bureau of Witchcraft for surveillance. People are already suspicious of Jo due to the mysterious circumstances under which her mother disappeared fourteen years earlier. As the family has finally given up on her mother’s return, Jo takes it upon herself to clean out her mother’s storage unit, where remnants of the woman’s life raise fresh questions: What secrets did her mother have to hide in a world that was so suspicious of women—Black women in particular? When she learns that her mother’s will requires her to take a strange journey in exchange for an inheritance, Jo takes the trip—setting in motion a series of events that threaten her freedom. Publishers Weekly calls The Women Could Fly “a dynamite story.... Giddings ingeniously blends her harrowing parable of an all-powerful patriarchy with insights into racial imbalance.” The author of the novel Lakewood, one of New York Magazine’s top ten books of 2020, Megan Giddings is an assistant professor at the University of Minnesota in Minneapolis. 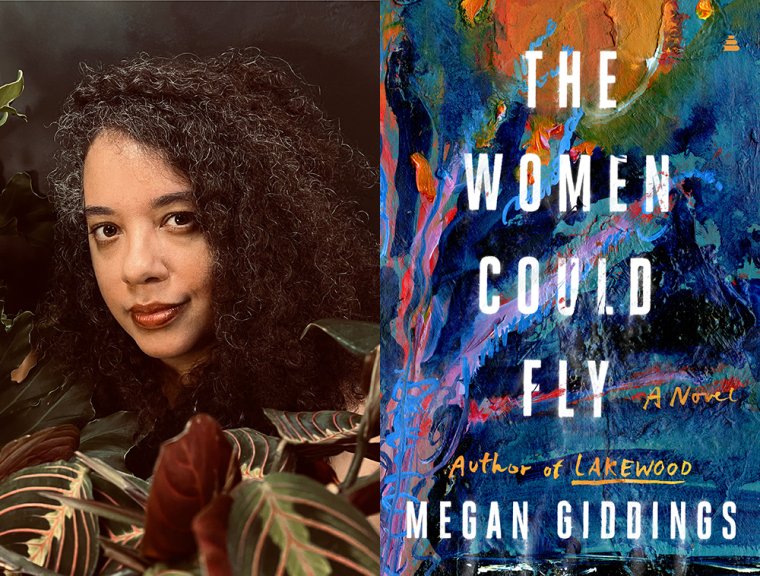 1. How long did it take you to write The Women Could Fly?
I started The Women Could Fly in June 2018. So it took about three years to write, although I think the only things left from those pages I wrote back in 2018 are shades of Jo, the book’s main character, and her best friend, Angie.

2. What was the most challenging thing about writing the book?
After my first book, Lakewood, I wanted to challenge myself by writing a book that still had a lot of pacing and movement, but I wanted to lean into a voice that could be distracted by jokes or anxiety or the past. It was really hard to find that balance throughout every draft. I also wrote a significant portion of this during 2020, and found it really hard to be as emotionally available as I needed to be to write.

3. Where, when, and how often do you write?
I do most of my writing at home, either on the couch or in bed. Yeah, my back hates it. My husband even built me a beautiful office in our basement, but that has become my teaching/Zoom/business room. The energy in there hasn’t been relaxed enough for me to feel creative enough to write well. I write about three to four times a week during a good week. It’s a rotating schedule in which I have to put active times on my calendar and be very firm. Sometimes I’m lucky and can do three whole hours of writing. Often it’s an hour that’s free, and that has to be it.

4. What are you reading right now?
A manga, Blue Period, by Tsubasa Yamaguchi, and Sula. I’d mentioned in passing to a friend that I’d never read Sula, and they were shocked. I was too when I reread the description: It sounds like my ideal novel, and it’s by Toni Morrison. How did I let it slip through? And Blue Period has made me feel so seen at times. Yeah, I’m not a cool Japanese teen trying to get an arts scholarship, but I know what it’s like to often feel like my ambitions are far beyond my abilities.

5. What trait do you most value in your editor or agent?
Look, there are many things to admire about editor Rakesh Satyal. He is funny and probably smarter than me and definitely has a far better understanding of how to keep a book’s pacing strong and well-conceived. But I think what I admire most about him is that he’s always pushing me on the sentence level.

6.  What is the earliest memory that you associate with the book?
The earliest memory is right before we went out on Lakewood. Dan Conaway, my agent, asked me as he always does now, “What are you interested in at the moment? What do you want to think about and write about next?” And I said, “Witches.” It felt like a vestige of being a child and just letting my imagination guide my mouth, but he was so excited and engaged that it made me excited to see where I would go next.

7. What is one thing that your agent or editor told you during the process of publishing this book that stuck with you?
This is probably the hardest question because I hold on to all the cut this, does this work, why is this here parts of writing and not what I think people most want to hear at this point: something inspirational. But looking through my notes from a meeting with Rakesh, I see I’d written down: “If you can surprise a reader with a character’s reaction, a scene will almost always work.” I feel like I should do ten embroideries of that advice and pass it out on the first day of graduate workshop in the fall.

8. Outside of writing, what other forms of work were essential to the creation of The Women Could Fly?
Cardio—biking, running, elliptical—because, again, I have to save my back. I also started dabbling in contemporary witchcraft: lighting blessed candles, trying road-opener oil, and reading spell books. Video games, especially the Fire Emblem games. Long walks with my friend Romayne during which we spent a lot of time watching all the dogs at the dog park and making up stories and personalities for them. I always want to write after we do that. Getting super into Premier League football.

9. If you could go back in time and talk to the earlier you, before you started this book, what would you say?
I would tell 2018 Megan that everything you’ve been told about publishing a book and how you can remotely qualify it a “success” is wrong, and you should erase it from your head. I would probably tell her—even though it might lessen some of the joy I felt when I finished it—that when you finish the draft with your editor, you’ll be able to think that success is leaving a book and feeling like you learned something hard about writing. This isn’t to tell her to not want ambitious career things, but it is to tell her that the healthiest way to determine whether a book is successful is that you’ll learn to ask yourself, “Where did I push myself? What did I learn?”

10. What’s the best piece of writing advice you’ve ever heard?
I don’t think I could call it “best.” Writing advice tends to only work in the context of a particular project’s goals or stylistic concerns. For The Women Could Fly, what helped me the most was rereading some of Ursula K. Le Guin’s Steering the Craft: A 21st-Century Guide to Sailing the Sea of Story, especially what she wrote about world-building. Thinking about how the objects that make a world unlike our own feel real was a way to make me understand the world I was creating in this novel.