This week’s installment of Ten Questions features Isaac Fitzgerald, whose memoir-in-essays, Dirtbag, Massachusetts: A Confessional, is out today from Bloomsbury. This eventful personal history follows Fitzgerald from his birth as the surprise child of an affair, to his tumultuous Catholic upbringing in blue-collar Boston and rural Massachusetts, to his young adulthood of service-industry work in a legendary San Francisco bar and beyond. After a difficult early adolescence in an old mill town, Fitzgerald lands a full ride to a swanky boarding school, where he arrives—without so much as bedsheets—to fend for himself among the children of the New England elite. He goes from outcast to insider, invited on trips with rich friends’ families to Nantucket, Miami, and New York City. On the West Coast in his twenties, Fitzgerald transforms from barroom punk to office worker, gaining and losing friends along the way. Fitzgerald mines his escapades for both comedy and pathos, as he revels in the fun while meditating on the “bad memories we tried not to keep.” Writing in the New York Times Book Review, Michael Ian Black calls Dirtbag, Massachusetts “an endearing and tattered catalog of one man’s transgressions.” Isaac Fitzgerald is the author of the best-selling children’s book How to Be a Pirate and, with Wendy MacNaughton, coauthor of Pen & Ink: Tattoos and the Stories Behind Them and Knives & Ink: Chefs and the Stories Behind Their Tattoos (With Recipes). 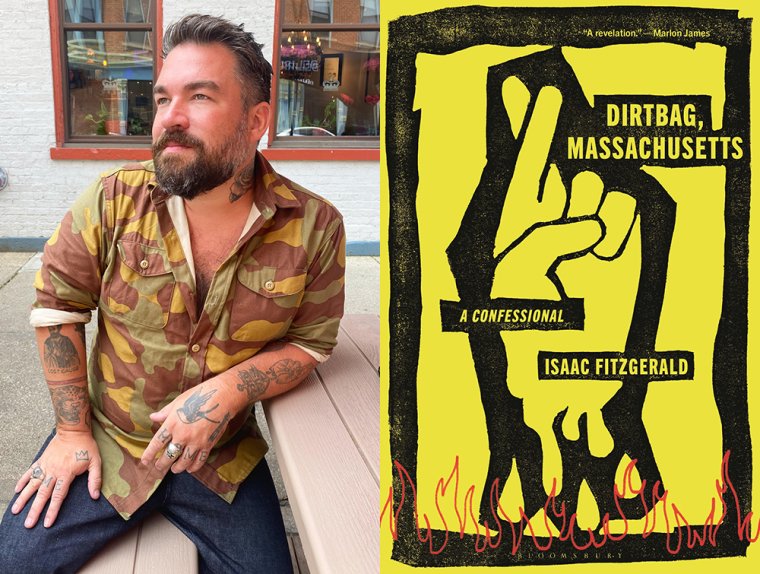 1. How long did it take you to write Dirtbag, Massachusetts?
I sold the book in 2018, but I really started working on it in earnest during the pandemic—albeit I had written a few of the essays years before that. Another way of looking at it would be that I’ve been formulating some of these stories since I was eight years old.

So four years. Or two. Or eight. Or thirty, depending on how you look at it.

3. Where, when, and how often do you write?
I write wherever I can. I have a desk in my apartment, but more often than not I’m writing while lying down on the couch, or even in my bed. But most of my writing is done while I’m moving around, walking the streets of New York City. I’m better when I move. So I am always jotting down notes and thoughts throughout the day in one of my many beat-up notebooks that I carry with me. As to the when, I find my most energetic writing gets done in the early morning—especially if I’m under deadline. How often? As often as I can.

4. What are you reading right now?
Morgan Talty’s Night of the Living Rez is incredible.

5. What trait do you most value in your editor or agent?
Both my editor, Nancy Miller, and my agent, Meredith Kaffel Simonoff, are tremendous. Both of them did so much to get Dirtbag, Massachusetts ready for publication. Both of them have spent far too much time on the phone with me, for which I will be forever grateful.

6.  What is the earliest memory that you associate with the book?
The opening line of the book, “My parents were married when they had me, just to different people,” is one that I’ve been saying for almost as long as I can remember, dating back to my early teenagehood.

7. What is one thing that your agent or editor told you during the process of publishing this book that stuck with you?
That a book has a long life. That’s part of the magic of books. A reader who truly needs these stories might not come to them for weeks, months, or even years. But when they do, the book will be important to them. Sure, selling a bunch of copies right out of the gate would be wonderful, but what you really want to do is find readers who connect with your work—readers who will feel less alone because of this book you created—and that can truly happen at any time.

8. If you could go back in time and talk to the earlier you, before you started Dirtbag, Massachusetts, what would you say?
It’s okay that you’re not rushing this book. If I had written this book at twenty-five instead of starting it in earnest around the age of thirty-five it would be a much different—and, in my opinion, inferior—book.

9. Outside of writing, what other forms of work were essential to the creation of Dirtbag, Massachusetts?
During the pandemic, I began walking twenty thousand steps a day. Walking is now an essential part of my writing process. It clears my head, gets me out into the world. And when I put my phone in my pocket and really focus on my surroundings, I often find moments—or thoughts or even emotions—that wind up on the page.

END_OF_DOCUMENT_TOKEN_TO_BE_REPLACED

“This book really fought me, or I fought it, for the first couple of years.” —Safia Elhillo, author of Girls That Never Die

Isaac Fitzgerald reads from the second chapter of his memoir, Dirtbag, Massachusetts: A Confessional, published in July 2022 by Bloomsbury.
X