This week’s installment of Ten Questions features Zeina Hashem Beck, whose third full-length poetry collection, O, is out today from Penguin Books. In this dynamic collection, Beck mixes free-verse lyrics with forms, including ghazals and what she has dubbed the “Duet,” a poem that mixes English and Arabic. Each Duet represents three separate poems: one in English, one in Arabic, and one that combines the verses for a bilingual poem. Contemplating the mysteries of faith, love, motherhood, grief, and joy, the collection also wages a critique of Western dominance of both geopolitics and literary culture, leading to the proliferation of stereotypes about the Arab world. In “Dear white critic,” for example, Beck writes: “Yes the earth turns & there is time between us, / but my universe is neither corner / nor as dark as you’ve called it. Do you believe me?” The poet Naomi Shihab Nye praises Beck’s work as embodying “a brilliant, absolutely essential voice.” A Lebanese poet who now lives in California, Zeina Hashem Beck is the author of the collections Louder Than Hearts (Bauhaun Publishing, 2017) and To Live in Autumn (The Backwaters Press, 2014). Her poem “Maqam” won Poetry magazine’s 2017 Frederick Bock Prize, and her work has appeared in Poetry, the New York Times, Ploughshares, and elsewhere. She cohosts Maqsouda, a podcast about Arabic poetry. 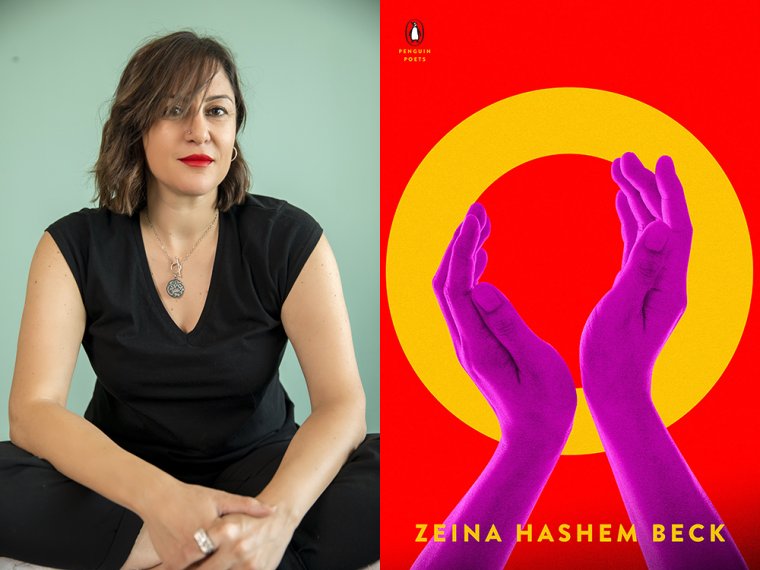 1. How long did it take you to write O?
I’m very bad at remembering dates, but I’d say about five years.

2. What was the most challenging thing about writing the book?
Unity, and by this I mean working against how my brain might have conceived it. I feel this book wanted to be unbridled, wanted a vaster span than my previous ones, and I had to let that happen without worrying: “But what is the book about? What is its central theme?” It was also difficult—and enjoyable—to figure out how to spread the bilingual poems, the Duets, across the book instead of having them all in one section. Finally, the Duets themselves were challenging to write, because they had to make sense and flow when the English and Arabic are read both separately and together.

3. Where, when, and how often do you write?
I write mostly at my desk in my room. I usually prefer mornings, though lately I’ve also been working around sunset. I tend to write in waves, so there are periods during which I write daily and others during which I don’t write at all. I’ve learned to stop worrying—or perhaps worry less—when I feel it’s been a long time since I wrote a poem. I was speaking with a friend the other day about that, and I half-jokingly said, “You can’t un-poet!” I believe this, and I believe that even when I’m not actually writing I’m preparing for it in some ways.

4. What are you reading right now?
I just finished Noor Naga’s beautiful novel If an Egyptian Cannot Speak English.

5. How did you know when O was finished?
I’m not sure. I guess it was a feeling, after I’d spent enough time arranging, rearranging, adding, and taking out poems. And there was also a sense, I think, of new poems starting to go in a slightly different direction, as if I was preparing for the next manuscript.

6.  What trait do you most value in your editor (or agent)?
How attuned Allie, my editor, was to the way the manuscript moved! When I added new poems, she knew exactly what sections they should go in. Also, she encouraged me to include poems I was reluctant about.

7. What is one thing that your agent or editor told you during the process of publishing this book that stuck with you?
Allie told me she loves how friendship doesn’t take a backseat to romantic love in the collection, and this made me trust those poems about friendship more.

8. What is the earliest memory that you associate with the book?
It was perhaps the night my uncle died. I was in the backseat of an Uber, going to a friend’s house in Dubai, after I’d just received the news that he had passed away in Lebanon. I remember being so fixated on bridges we passed along the way—their curves, the car lights on them, the darkness under them, their gray color, their immensity. Somehow, it was how I grieved, looking at those bridges, and this was what ultimately led to the poem “ode to the afternoon,” which I think helped set the tone for the collection.

9. Outside of writing, what other forms of work were essential to the creation of O?
I think it was essential that I turn further inward, that I trust the “quieter” poems. Also, going back to reading Arabic poetry helped me write the Duets.

10. What’s the best piece of writing advice you’ve ever heard?
It came from my husband, before I had published a single poem and as I was complaining about wanting to be a poet: “So write,” he told me. The comment pissed me off at the time, because I wanted a response like, “Yes, it will come, surely,” but I now realize it encouraged me to start working more seriously on my writing.

END_OF_DOCUMENT_TOKEN_TO_BE_REPLACED

“I wanted to write female friendship in a way that felt honest to me.” —Christine Kandic Torres, author of The Girls in Queens

“When you’re in that in-between stage, between starting something and gathering speed, a piece of chipped nail polish is the most riveting thing in the world.” —Sloane Crosley, author of Cult Classic