This week’s installment of Ten Questions features Sloane Crosley, whose novel Cult Classic is out today from MCD. In this dark comedy that explores romantic love, friendship, and memory in post-Great Recession Manhattan, Lola finds her herself on the cusp of marriage after a host of failed relationships and a magazine career that did not survive the digital era. Her former colleagues and friends have all reinvented themselves, including Clive, who has become a celebrity wellness guru. On a night out with her old office mates, Lola steps out for a smoke only to run into her ex-boyfriend, Amos, a now-famous novelist for whom she has lingering feelings. Later, she bumps into still more exes in a series of increasingly unsettling encounters. When Lola realizes that Clive has pulled her friend Vadis into his orbit, and her love life is at the center of their cultic scheming, she struggles with whether to go along with their plans or resist—if she can resist, that is. Publishers Weekly calls the novel “witty and fantastical.... Crosley has found the perfect fictional subject for her gimlet eye.” Crosley is the author of the novel The Clasp and the essay collections I Was Told There’d Be Cake, How Did You Get This Number, and Look Alive Out There. 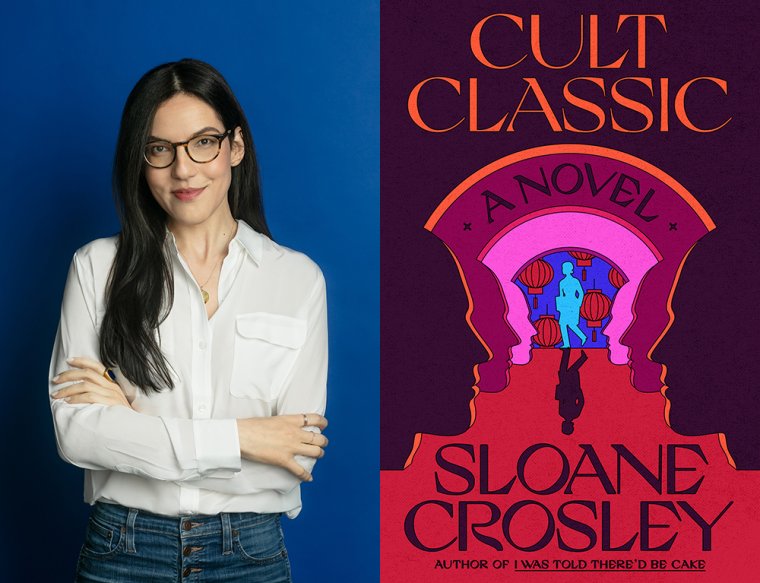 1. How long did it take you to write Cult Classic?
Getting this question wrong feels like spelling your name wrong on the SATs—but I don’t really know. None of it existed before 2017. I worked on it in a very intense burst between the end of 2017 and 2018, and I handed in the first full draft to my editor in the less-than-auspicious month of March 2020. And yet there are individual images that have been lolling around in my brain for decades.

2. What was the most challenging thing about writing the book?
Creating a world that is based on ephemeral or cursory interactions and simultaneously trying to evoke the “correct” amount of attachment to these characters. You have your main crew of consistent characters, and they become the container through which the others pass. Because Cult Classic is so much about this slideshow of memory—that’s its raison d’etre—I had to make these men in Lola’s life feel important without creating an outsized sense of craving for them. In short, without robbing a reader. I think it’s an abuse of trust when that happens, when done intentionally by a writer.

3. Where, when, and how often do you write?
I write in my kitchen, at a little table facing a wall, which sounds punishing—but there’s a window if I turn my head. Or in bed. I write all the time as early as I can or, if it’s possible, in an evening spurt. Though I will fall out of the habit and find that I have produced nothing all day but e-mails. Or questionnaires.

4. What are you reading right now?
Dorothy Baker’s Cassandra at the Wedding. It’s just very funny and well done. I was hooked by the end of the first paragraph.

5. What is one thing that surprised you during the writing of Cult Classic?
I suppose two things: First, the genuine affection I felt for all the characters Lola lambasts. Something transformative happens when you write passage after passage like that. Have you ever seen Spike Lee’s The 25th Hour? I don’t know why I’m asking: This is a questionnaire; you’re not in a position to respond. Well, there’s this monologue in the middle that I like to think shares a border with the monologue in the middle of Cult Classic. In the film, you have the actor Ed Norton listing all the different kinds of New Yorkers he hates—“fuck you” to this group and that—and the music swells and the images bleed together, and every “fuck you” becomes a love letter to the city that made him. Second, the ending. Which is a pretty big twist. At least I think so. I didn’t have it at the beginning but, when I realized what had to happen, it was a thrill.

6. What is the biggest impediment to your writing life?
I love the internet. I just love it! I won’t apologize! But I think it’s a red herring as an impediment. The biggest problem is creating enough of a book that you can treat it like a plant: You can convince yourself, every day, that it’s important to water this plant, that it will grow into something beautiful if you care for it. When you’re in that in-between stage, between starting something and gathering speed, a piece of chipped nail polish is the most riveting thing in the world.

7. Outside of writing, what other forms of work were essential to the creation of Cult Classic?
I read books on cults. It was actually pretty difficult to find what I was looking for because I needed material written from the inside, and certainly not by anyone who’d been deprogrammed, which is who all cult books come from. Or from experts. Margaret Singer wrote the book, Cults in Our Midst. But Cult Classic is a comedy. The danger presented by the “cult” in Cult Classic hews closer to the danger presented by, say, Gwyneth Paltrow’s Goop, except that it is far more ethically shaky. I just needed to filch the self-serious lingo. The most useful text was probably an anthropology dissertation on Silva Mind Control done as part of a study on “nonconventional religious groups.” The author is Analine M. Powers. There’s a “brain wave frequency chart” from 1975 that I might have physically kissed when I saw it.

8. What is the earliest memory that you associate with Cult Classic?
There’s a description of cocktails near the start, these fancy cocktails with the good cherries and sprigs of mint. That passage was written so early. When I think of how the book begins, I think “first, the cocktails,” even though this is not, in fact, how the book begins.

9.  What trait do you most value in your editor?
You have to earn a laugh and an emotional response from him. He’s on my side but not unconditionally.

10. What’s the best piece of writing advice you’ve ever heard?
Turn off the phone.

END_OF_DOCUMENT_TOKEN_TO_BE_REPLACED

“I have to lock up my phone every day—in a box designed for locking up cookies—during the hours I’m writing. Text messages ruin me.” —Lydia Conklin, author of Rainbow Rainbow