This week’s installment of Ten Questions features Gabe Montesanti, whose debut memoir, Brace for Impact, is out today from the Dial Press. The narrative follows Montesanti through her early twenties in Saint Louis, where she decides to try her luck at roller derby. Although she had been a dedicated swimmer growing up in a conservative Catholic family in Michigan, Montesanti finds herself thrillingly unprepared for the wild sport of roller derby. Readers follow Montesanti as she becomes “fresh meat,” learning to play at the dilapidated Skatium in Saint Louis’s South City. Montesanti’s body gets badly bruised in the process, but her spirit swells as she finds a place among the players and within roller derby's queer community. As Montesanti embraces the physical pain of competition, she comes to understand the more harmful psychic damage caused by swimming, which—along with her troubled relationship with her mother—contributed to her body-image issues and lack of self-confidence when she was younger. Publishers Weekly calls Brace for Impact a “spirited coming-of-age account” that “brims with joy and resilience.” Montesanti holds an MFA from Washington University in Saint Louis. She teaches creative writing at the University of North Texas and serves as a mentor for the PEN America Prison and Justice Writing Program. Her work has appeared in Belt Magazine, Brevity, the Offing, and Boulevard. Her essay “The Worldwide Roller Derby Convention” was recognized as a notable essay in 2020’s The Best American Essays. 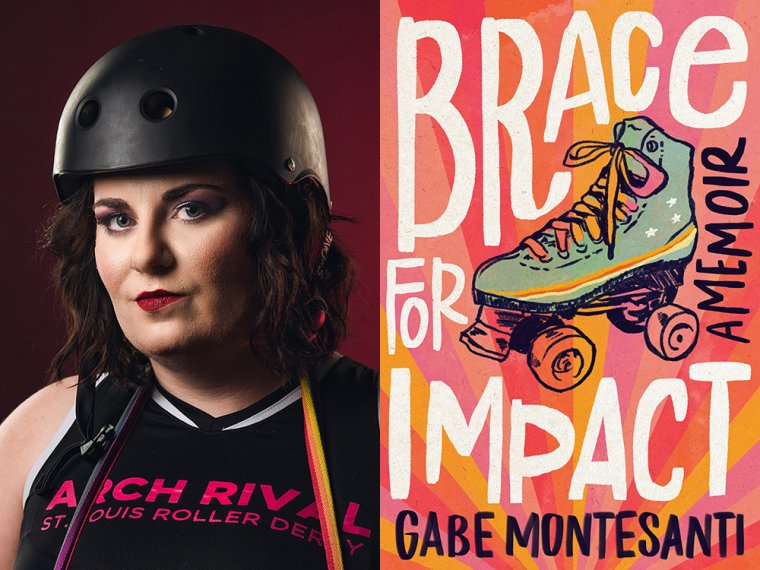 1. How long did it take you to write Brace for Impact?
I started writing Brace for Impact about six months after I joined the local roller derby team, Arch Rival Roller Derby, in Saint Louis in October 2016. The book took about five years total, from my first depiction of shakily standing up on skates as an adult to acquiring literary representation to finishing the last round of copy editing with my amazing team at the Dial Press. It started as a collection of stand-alone essays, which slowly morphed into chapters of a cohesive narrative. Once I realized I was writing a memoir—about two years into the writing process—everything started falling into place.

2. Where, when, and how often do you write?
As a teenager, I wrote sitting up in bed in the middle of the night, but I rarely do that anymore. Now I write on an old shit-brown couch my wife and I got secondhand from my sister-in-law. When I’m in the throes of a project, my sleep schedule completely changes. In the middle of 2020 my editor wrote me a very detailed feedback letter about my manuscript, which spurred me to rewrite the entire book in about four months. Most of that work got done between 4:00 AM and 10:00 AM. I’m finding that 6:00 AM is my sweet spot these days—maybe all those years of early swim practices had more of an effect on me than I thought.

3. What is one thing that surprised you during the writing of Brace for Impact?
I’ve always thought of writing as a very solitary process, but my experience of writing Brace for Impact was anything but that. Of course, there were times I sequestered myself to get work done, but I really relied on my community for feedback and guidance—my wife, my writing mentor, my roller-derby family, my MFA cohort, and my agent and editor. I love sharing my work, so much so that I have to actively remember to keep it private in the early stages, and I’m so lucky that I have a support system of people who would do anything for me.

4. What is your earliest memory associated with writing this book?
The first essay I wrote that morphed into a chapter in Brace for Impact was actually about a seedy strip club I visited in East Saint Louis. The strip club reminded me so much of the roller rink where I skated on the other side of the Mississippi River that I wrote an essay comparing the two places. George Hodgman, author of the memoir Bettyville, read my work and told me to ditch the strip club entirely. “What we need is more of this wild-ass roller rink!” He was referring to the fact that many of the skaters thought the rink doubled as a drug den. Unhoused people had taken up permanent residence in the old locker rooms. Raves were held there nearly nightly. “You have a book here,” he told me. “You know that, don’t you? You have a whole goddamn book here.”

5. What was the most challenging thing about writing the book?
I think the hardest thing was going back and reading old journals. I’ve been writing since I was a child, and I unearthed and relied upon a lot of my journal material when I was writing Brace for Impact. I wanted the book to be as accurate to my experience as I could possibly make it, but going back and reliving some of the hardest parts of my life was sometimes painful. It helped me develop compassion and empathy for those past versions of myself.

6. What is one thing that your agent or editor told you during the process of publishing this book that stuck with you?
I got an e-mail from the man who would become my agent, Markus Hoffmann, after submitting my work to a writing residency. He was one of the jury members. He contacted me out of the blue right as I was lacing up my skates to play the local Star Wars–themed team, Rebel Skate Alliance. I was in my Boy Scouts uniform, which matched my team’s theme that year. I was outside in the chilly December air as I read his e-mail offering representation. I will never forget his exuberance. It was the first time I realized that my very specific story could also become what Abby Wambach would go on to call “a universal story of healing and triumph.”

7. If you could go back in time and talk to the earlier you, before you started Brace for Impact, what would you say?
I would tell myself to live as largely and boldly as possible. I would also remind myself to write everything down—even things that seemed insignificant. It’s amazing how those specific, concrete details from my early days playing derby or growing up in the rural Midwest helped the scenes in my book come alive.

8. Who is your most trusted reader of your work and why?
Diane Seuss. She was my poetry professor in college, and we’ve remained close. She just won a goddamn Pulitzer Prize for her memoir-in-sonnets, frank: sonnets. I was asleep when it was announced. She called, waking me up, and said, “Have you heard the news? frank just won a Pulitzer.” I thought it was interesting that she said, “frank won a Pulitzer,” not “I won a Pulitzer”—as if her work was separate from herself. But that’s one of the lessons she has taught me over the years. The work is the work. When people critique the work, they’re not critiquing you. Another thing she’s always said that has stuck with me and guided me is that our stories—our experiences growing up as weirdos in rural, working-class Michigan—matter.

9. What is the biggest impediment to your writing life?
The internet. I have to turn off the Wi-Fi when I work, and I put my cell phone on airplane mode. I allow myself to be unavailable. When random questions or tasks spring into my head, I’ve taken to writing those down to research and complete after my writing session. Figuring this out about myself was like leveling up in a video game.

10. What’s the best piece of writing advice you’ve ever heard?
My favorite piece of writing advice wasn’t explicitly spoken—it was modeled for me by the writers I admire most. Essentially, it’s simple: Prioritize writing. Make time for it. Plan it like you plan your grocery lists. Plant your ass in the chair and do it. I’m certainly not perfect in following this advice, but I’ve gotten better at realizing when my priorities are out of whack. When I remember how essential writing is to my health and my happiness, everything else in my life figures itself out.

END_OF_DOCUMENT_TOKEN_TO_BE_REPLACED

“Adjust one small plot point in the second half of the book, and you realize you’ve got to go back to the beginning and account for that change.” —Soon Wiley, author of When We Fell Apart