This week’s installment of Ten Questions features Soon Wiley, whose debut novel, When We Fell Apart, is out today from Dutton Books. Set in Seoul, this brooding literary thriller explores the complicated relationship between Yu-jin, a young South Korean woman from a powerful family, and Min, a biracial Korean American who feels as out of place in his mother’s birth country as he did in his native United States. Chapters alternate between Min and Yu-jin’s perspectives to weave a story about the struggle to fit in while remaining true to oneself. After Yu-jin is found dead of an apparent suicide, an incredulous Min seeks greater insight into the woman he had been seeing, only to uncover further mysteries. Kirkus Reviews describes the narrative as “fueled by deep feeling and a powerful sense of place…capturing the despair of striving individuals pushed to the margins by conformist norms.” Wiley holds an MFA in creative writing from Wichita State University. His writing has been nominated for a Pushcart Prize and earned him fellowships in Wyoming and France. He lives in Connecticut with his wife and their two cats. 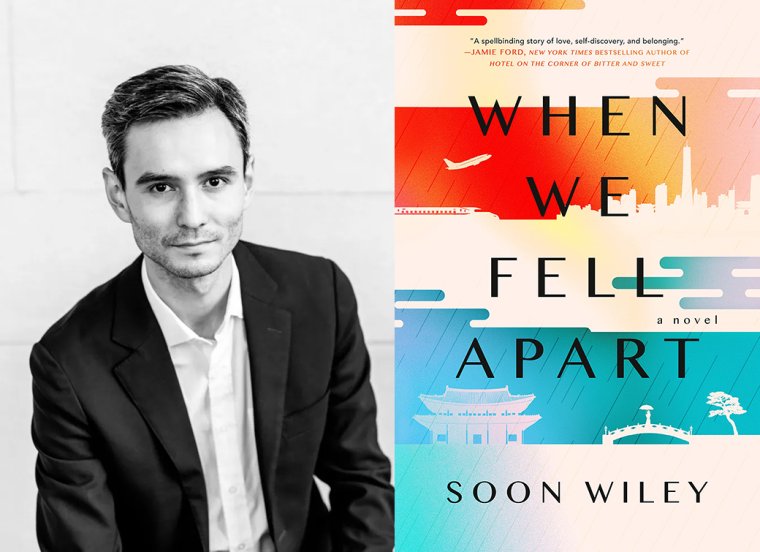 1. How long did it take you to write When We Fell Apart?
From start to finish, it took me around seven years to write When We Fall Apart. After I wrote Min’s chapters, I realized that I needed to include a second point of view. While this was a pretty daunting task, it was refreshing in the sense that I felt like I was writing a completely new book. I worked solely on Yu-jin’s chapters for about a year, and only after I’d really polished them did I go about fitting them together with the preexisting chapters from Min’s perspective. In a lot of ways, it felt like I was writing two books at once. I’m not sure if this was the most effective way to go about writing the novel, but working on each point of view individually really allowed for a full immersion in each character.

2. What was the most challenging thing about writing the book?
This might come as a surprise to some readers, but I found plotting the novel quite difficult, especially during the later stages of revision, when my editor and I were tweaking small things to raise the narrative tension or build suspense. Once you’re at that stage of editing, the process can feel a bit like pulling on a loose thread. Adjust one small plot point in the second half of the book, and you realize you’ve got to go back to the beginning and account for that change. When it comes to plot, the interconnectedness of every detail is immense.

3. Where, when, and how often do you write?
Unless I’m traveling, I always write in my office at home. I do my best writing in the early morning and sometimes at night. I try to write for at least one or two hours. But depending on my work schedule, I might only be able to squeeze in thirty minutes a day. As I’ve gotten older, I tend to lean toward the philosophy of “anywhere, anytime, for however long,” when it comes to writing.

4. What are you reading right now?
I’m a high school English teacher, so I’m always reading a lot of books. Right now, for work, I’m reading Never Let Me Go by Kazuo Ishiguro, Ender’s Game by Orson Scott Card, and Into the Wild by Jon Krakauer. For pleasure, I just finished Min Jin Lee’s Pachinko, and I’m now reading The Cold Millions by Jess Walter and Middlemarch by George Eliot.

5. Which author, in your opinion, deserves wider recognition?
Gosh, that’s a hard question—there are so many brilliant authors who have done or are doing amazing work. I’ve always felt like Evan S. Connell should be more celebrated. How Mrs. Bridge [1959] isn’t widely recognized as a masterpiece is somewhat of a mystery to me. For a more contemporary writer, I’d have to say Don Lee is an author who is certainly deserving of more recognition. His short story collection, Yellow, is just brilliant. And if you’ll allow me to squeeze one more name in: Michael Knight. His short story “Jubilee” in his collection Eveningland will absolutely wreck you.

6. What is the biggest impediment to your writing life?
While I love teaching, I’d have to say that my job is probably the biggest impediment to writing. Time is the most valuable resource a writer can have, so if you’re trying to write while also working full-time, you really need to be dedicated and structured with your writing routines. That said, I’m lucky enough to have my summers off; so then the only real distraction from writing is the warm weather. It’s really hard to sit down at a desk when it’s a beautiful summer day outside. I also think writers are highly adept at coming up with all sorts of obstacles to their writing. If it wasn’t my teaching gig, I’m sure it would be something else that I was convinced was taking time away from writing.

7. What trait do you most value in your editor (or agent)?
Good communication skills and honesty. Working with both an editor and agent requires a lot of trust, and those traits make trusting them with your work a lot easier. Having an editor and agent who will e-mail or call you back in a timely manner is immensely helpful, because writers are known to be a bit paranoid and frenetic—not speaking of myself, of course. After the actual writing and revising of a book, I think having a shared vision with your agent and editor is the single most important thing for a writer. Despite what we might like to think, books aren’t written by the author alone; there’s a whole team of people—editors, agents, and readers—who help shape the book into a finished product. It really takes a village. Knowing that everyone is on the same page and envisioning the same finished product makes the editing and prepublication process a lot easier.

8. What is the earliest memory that you associate with the book?
When I first started working on what would become the novel, I was teaching high-school English at a school in Washington, D.C. I’d just moved to the city, and it was really the first time I’d had anything resembling a nine-to-five job. I was worried about how I’d get any writing done with the responsibility of a full-time gig, so I set about following a very rigorous and structured writing regimen. I was living in this great one-bedroom apartment in the Adams Morgan neighborhood, and I remember getting up around 5:30 AM each day, which meant that if I was at my desk by 5:45 AM I’d have almost two hours to write before catching the 7:20 AM bus to my school. My desk at the time was this mammoth slab of wood on two sawhorses that I’d purchased from some guy in Maryland and lugged back to the city in my pickup truck. What it lacked in drawers it made up for in sheer surface area. There was enough room for a huge external monitor, keyboard, and loads of books and scrap paper. I have these vivid memories of working at that desk in my dark living room in near total silence, before the city was really awake. While I worked, the room would go from this gloomy darkness to light gray, then to bright yellows when the sun would press through the blinds. I associate those early mornings in that apartment with the beginnings of the novel. I found it easier to write before the world really got moving. It took the pressure off, knowing that I could spend this time however I wanted because everyone else was either asleep or getting ready for work. I still write at the same desk, even though it’s completely impractical to have a desk without drawers!

9. Who is your most trusted reader of your work and why?
I have a few friends from graduate school who I usually ask to read early drafts of my work, but really my wife is the person I trust the most. She reads fiction, but she isn’t a writer, and she never took a creative-writing class, which actually makes her the ideal reader. Writers aren’t always the best readers; we tend to get caught up in craft, and we can often see the strings being pulled. In other words, we can’t really read books like normal people. Whenever I give my wife something to read, I know she’s going to read it and critique it like someone who is looking to read a good story, and I think that’s a really valuable trait in a reader.

10. What’s the best piece of writing advice you’ve ever heard?
Two anecdotes come to mind. In Stephen King’s amazing book On Writing: A Memoir of the Craft, I remember reading that a young writer will eventually come across a piece of fiction, read it, and think, “I can write better than this.” I’m paraphrasing, but that idea has always stayed with me. The attitude might seem a bit arrogant, but trying to write a novel is a completely crazy endeavor, and you’ve got to have that belief in yourself and in your work. I’m also a huge fan of E. L. Doctorow’s quote: “Writing is like driving at night in the fog. You can only see as far as your headlights, but you can make the whole trip that way.” Writing fiction, especially a novel, is a huge leap of faith, and it’s easy to be discouraged when you look up from the page and realize how far you have to go. But if you keep your head down and chip away, page by page, chapter by chapter, you’ll find that writing a novel doesn’t feel so daunting.

END_OF_DOCUMENT_TOKEN_TO_BE_REPLACED

“I am a fitful writer: long periods of not writing followed by intense engagement.” —Dana Levin, author of Now Do You Know Where You Are

“To be a writer, the best thing someone can do, in my opinion, is read. Read everything.” —Eloisa Amezcua, author of Fighting Is Like a Wife

“I hope everyone who writes begins by recognizing their own value and the value of the very act of their having chosen to write.” —Dara Barrois/Dixon (formerly Dara Wier), author of Tolstoy Killed Anna Karenina

“I have dogs who get me outside on walks every day, but otherwise I generally feel like I should be writing whenever I’m not.” —Maud Newton, author of Ancestor Trouble