This week’s installment of Ten Questions features Eloisa Amezcua, whose second poetry collection, Fighting Is Like a Wife, is out today from Coffee House Press. The formally inventive poems in Fighting Is Like a Wife reconstruct the love story and tragedy of two-time world boxing champion “Schoolboy” Bobby Chacon and his first wife, Valorie Ginn. In fierce visual poems that incorporate direct quotes from sports commentators and Bobby himself, Amezcua reveals the brutality and vulnerability of boxing, love, and poetry. “These brilliantly tactile, visceral poems excavate the relentless combinations of jabs and apologies that come from men who only know how to talk with their hands,” writes Adrian Matejka. “It takes a poet of exceptional empathy and uncanny dexterity to turn the difficult lives of Valorie Ginn and Bobby Chacon into verse as Amezcua has done.” Eloisa Amezcua’s first book, From the Inside Quietly, was published by Shelterbelt Press in 2018. A MacDowell fellow, her poems and translations have been published in the New York Times Magazine, Poetry magazine, the Kenyon Review, Gulf Coast, the Academy of American Poets’ Poem-a-Day series, and elsewhere. She is the associate director of the Antiquarian Booksellers’ Association of America and serves on the faculty of Randolph College’s low-residency MFA program. 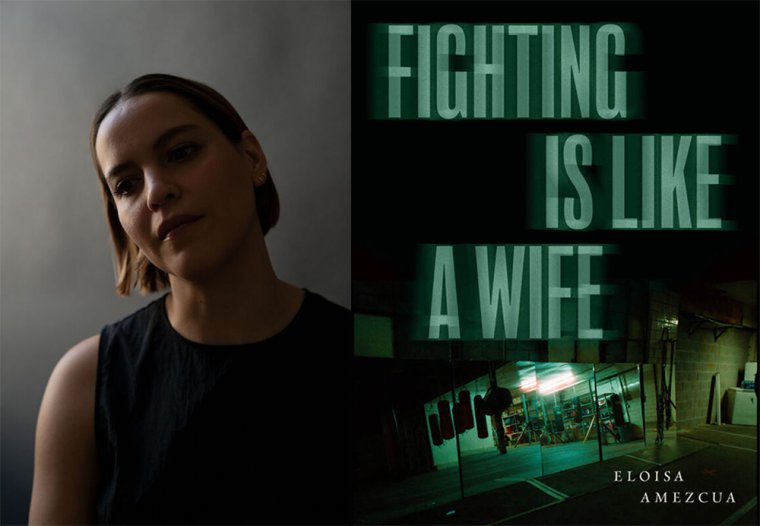 Eloisa Amezcua, author of Fighting Is Like a Wife.    (Credit: Amelia Golden)

1. How long did it take you to write Fighting Is Like a Wife?
I began drafting poems about boxing in June 2016, but after Bobby Chacon passed away in September of that year, the project that would become Fighting Is Like a Wife began to take shape. I drafted and revised poems up until the summer of 2021, so all in all it was about five years.

2. What was the most challenging thing about writing the book?
The Valorie poems were by far the most difficult to write. There’s a lot of information about Chacon and his career available in newspaper articles, interviews, and video footage, but in all of the research I did, I was only able to find two or three direct quotes from Val. I wanted to present her as a full person—someone who loved deeply, who struggled in the shadow of the men in her life.

3. Where, when, and how often do you write?
I don’t have a regular writing practice. I take notes often in a small notebook that I carry with me or as text messages to myself and I’m constantly thinking about form—how can I say the things I want to say in a way that surprises me (and hopefully the reader). When I do sit down to put those pieces together, it’s typically in the morning or while the sun is still out. I’m useless creatively after dark.

4. What are you reading right now?
An Oresteia translated by Anne Carson! I’ve always admired Carson’s translations, the way she cuts a sentence down to its essence and builds from there. Her translation of Elektra by Sophokles is just brilliant.

6. Would you recommend writers pursue an MFA?
To be a writer, the best thing someone can do, in my opinion, is read. Read everything. Read widely. Read and reread with an eye towards the “how” of the writing they love. How does this author build tension? How does time function in this essay? How does the poet elicit one emotional response over all others? How can I implement this into my own writing (i.e. craft!)?

If someone needs or wants to be enrolled in a formal graduate program to do this, they should. If someone can or wants to do this learning on their own, that’s great too.

7. If you could go back in time and talk to the earlier you, before you started Fighting Is Like a Wife, what would you say?
Don’t shy away from your obsessions. Keep playing. Be kinder to yourself.

8. How did you know when the book was finished?
The book was finished when the amazing team at Coffee House Press told me I had to hand in the final draft. The project and the obsession continues. That’s not to say I’ll publish another book about Chacon or boxing, but I’ve been creating pieces in different mediums that are directly related to this book.

9. Who is your most trusted reader of your work and why?
It’s not one person but the community of writers—faculty, staff, students—at the Randolph College MFA program (where I teach) that I trust most with my work. It’s a group of thoughtful, supportive, active listeners and readers who have my best interest at heart. What more could a girl ask for?

10. What’s the best piece of writing advice you’ve ever heard?
Take your time.

END_OF_DOCUMENT_TOKEN_TO_BE_REPLACED

“I hope everyone who writes begins by recognizing their own value and the value of the very act of their having chosen to write.” —Dara Barrois/Dixon (formerly Dara Wier), author of Tolstoy Killed Anna Karenina

“I have dogs who get me outside on walks every day, but otherwise I generally feel like I should be writing whenever I’m not.” —Maud Newton, author of Ancestor Trouble

“Get out of the way of the writing. Don’t make it precious. Sit down and get to it.” —Roger Reeves, author of Best Barbarian

“It’s good to know who to trust, I’ve been learning, but also who to doubt.” —Eloghosa Osunde, author of Vagabonds!