This week’s installment of Ten Questions features Mark Bibbins, whose fourth book of poetry, 13th Balloon, is out today from Copper Canyon Press. In a book-length poem sequence, Mark Bibbins writes to a beloved who died of AIDS in 1992. He offers memories of their time together, of the terrifying world in which they inhabited, and what unfolded in his wake. “When it was my turn / to speak at your memorial / what did I say / a version of    you aren’t really dead / or see you again    some useless thing / any other deathstruck boy / lightly educated at state and city schools / might have said.” Within 13th Balloon, after all this time, there is more room to speak: to remember the heartache and to celebrate the soaring joy of love. There is the hospital room, the many other memorials of the era, but there is also the roof in Brooklyn, a picnic shared on the apartment floor, and so much more life to cherish. Mark Bibbins is the author of three previous books of poetry, including Sky Lounge (Graywolf Press, 2003), which won a Lambda Literary Award. His poems have also appeared in various publications such as the New Yorker, the Paris Review, and Poetry. He teaches writing at the New School, where he cofounded LIT magazine. He lives in New York City. 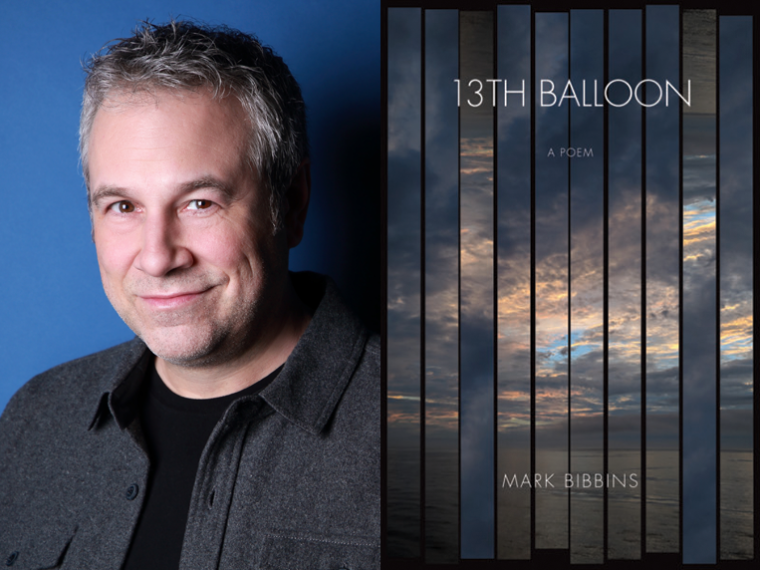 1. How long did it take you to write 13th Balloon?
About six years, although during the first two I had no idea what was happening, let alone that it would turn into a book. As it grew I thought it could end up being a section of a book, or maybe a chapbook, but it kept adding to itself. It wasn’t until the final year or so that I felt I had some control over the shape and content, that I understood how the pieces worked together.

2. What was the most challenging thing about writing the book?
It’s mostly an elegy for someone who died of AIDS at a very young age in the early ’90s, so writing it involved revisiting the horrible experiences around his illness and death. It also includes several embarrassing scenes from my youth—easy enough to write, but anxiety-making to share with an audience. Allowing myself to be more vulnerable in that regard has been a challenge.

3. Where, when, and how often do you write?
Since I’ve somehow ended up without a desk in my apartment, I usually write while sitting on my couch or propped up in bed next to my cats. Airplanes tend to be weirdly generative too, but I don’t fly often enough for that to be viable. I’m amazed by people who can take their laptops to a café and write for hours—too many distractions for me. I’ve never been a morning person, so I used to write late at night a lot, but much of 13th Balloon spilled out during afternoons. There might be some metaphor in there about daylight. As for how often: not as often as I’d like.

4. What are you reading right now?
I’m teaching two workshops and advising MFA candidates on their thesis manuscripts, so I’m reading lots of students’ poems, which is a delight and a privilege to be able to do. Also Bob Kaufman’s collected poems, Maaza Mengiste’s The Shadow King, and Sarah Kendzior’s The View From Flyover Country.

5. Which author, in your opinion, deserves wider recognition?
Chris Nealon’s work is remarkable. Truly brilliant. His last book of poetry was Heteronomy, the title poem of which can be found online. Everyone should read it now.

6. What is the biggest impediment to your writing life?
Sorry, one of the cats just did something amusing, could you repeat the question? Ah yes, my inability to focus.

7. What trait do you most value in your editor?
That’s a tough one because Michael Wiegers, the executive editor at Copper Canyon, has so many admirable qualities. He’s worked in publishing for thirty years, and his dedication to poetry is inspiring and sustaining. We’ve become good friends since the press started publishing my books, and I value his honesty, his intelligence, his love of the visual arts, his wicked sense of humor. I’m happy to have failed at narrowing it down to one trait.

8. What is one thing you might change about the writing community or publishing industry?
A long time ago I met a painter who worked in a museum. I said that sounded like the perfect job for an artist, and she said it was like being a horse working in a glue factory. It’s probably for the best that I’m unfamiliar with the inner workings of the publishing industry, especially when it comes to things like giant advances and problematic rollouts of overhyped, poorly written novels.

As I think of things I might want to see change in the poetry-writing community—which of course is not a single entity but countless entities of varying sizes that sometimes overlap—I realize my gripes seem really petty. So, starting with myself, less pettiness?

9. Who is your most trusted reader of your work and why?
This might sound terrible, but I don’t show things to anyone until I feel they’re done, so I have to trust myself to be, or at least pretend to be, objective about my own work.

I will say that I owe a huge debt of gratitude to David Caligiuri, who proofreads for Copper Canyon. He went above and beyond in terms of fact-checking the manuscript for 13th Balloon, thus rescuing me from several ridiculous errors. Rowan Sharp, also excellent, read the next version. I’d love to see proofreaders get more of the credit they deserve. John Pierce, Copper Canyon’s managing editor, was helpful and supportive throughout the production process, especially during the last stages of fine-tuning the manuscript.

10. What’s the best piece of writing advice you’ve ever heard?
In “Personism” Frank O’Hara writes, “You just go on your nerve,” which isn’t the best advice for everyone—especially the “just” part—but I’ve found it to be useful, especially with 13th Balloon.