This week’s installment of Ten Questions features Charles Yu, whose latest book, Interior Chinatown, is out today from Pantheon. Every morning, Willis Wu descends from his tiny eighth floor apartment to the Golden Palace—a restaurant and, first and foremost, a film set. Everywhere in Chinatown a procedural cop show called Black and White is in perpetual production. Everything in Wu’s world is framed around the show and is subject to its rules. An Asian man can never be a protagonist, for instance; he’s most likely Background Oriental Male, Dead Asian Man, or Generic Asian Man Number Three. But Wu dreams he might be something more—Kung Fu Guy, specifically—the rarefied pinnacle for the Asian man extra. As Wu reaches for a place in the world, however, the story begins to shatter. What is Chinatown? he wonders. What will happen if he veers off-script and climbs outside? Written in a hybrid screenplay-novel form, Interior Chinatown is both fantastical and devastatingly real, demonstrating the ways in which stereotypes and racism entrap language, behavior, and relationships at every turn. A National Book Foundation 5 Under 35 honoree, Charles Yu is the author of three previous books: Third Class Superhero (Harcourt, 2006), How to Live Safely in a Science Fictional Universe (Pantheon, 2010), and Sorry Please Thank You (Pantheon, 2012). He has written for several TV shows, including the HBO series Westworld, for which he was nominated for two Writer’s Guild of America awards. His writing can also be found in the New Yorker, the New York Times, and the Wall Street Journal, among other outlets. He lives in California. 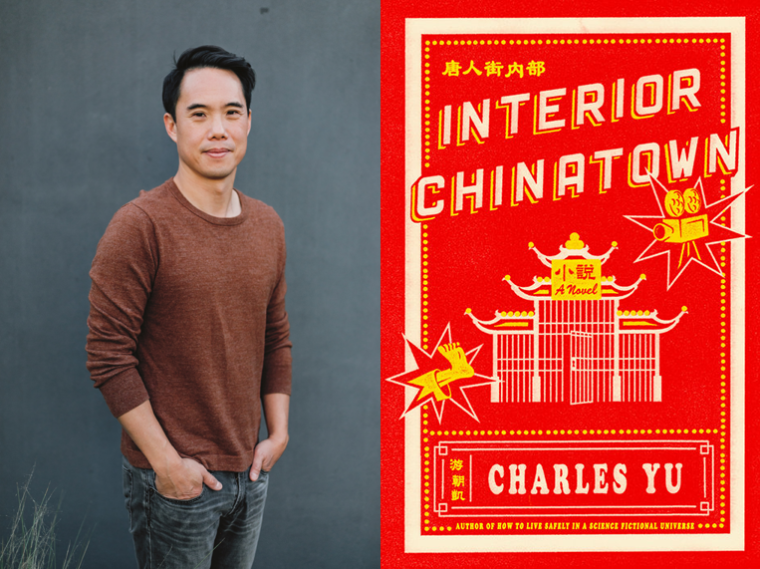 1. How long did it take you to write Interior Chinatown?
Either a little less than two years or a bit more than five years, depending on how you count it. I basically wrote the book three times, and threw away the first two versions. I don’t mean drafts—I mean that I had a substantially different version of this book that just wasn’t working, scrapped it, did that again, and then the third time was a charm. Except even then it took me a while to figure out how to make it the best version of what I dreamed it could be, which took a lot of help from my editor, Tim O’Connell, and my agent, Julie Barer.

2. What was the most challenging thing about writing the book?
Figuring out what “reality” was. The protagonist of the novel, Willis Wu, dreams of being more than a bit player (Generic Asian Man Number 3)—of actually being a star. In the course of the story, Willis tries to break out of his role, but in doing so he calls into question—for himself, and for the reader—what the rules of his reality are. Is he trapped? What would it take to break out of a role? Who made up these roles, and what happens if he gets to the top, or jumps off the ladder completely? What is Chinatown? Why is he always on the interior of it? And what is on the outside of it?

3. Where, when, and how often do you write?
I write mostly at home. I have a library, but my dog has stolen the couch in there, so I often retreat to a desk in my bedroom. My hours are fairly regular—after dropping off the kids at school and walking the dog (the same one who has taken over my primary writing area)—I sit down around 8:30 AM or 9 AM and write until 3 or 5 or 7 PM, with breaks for lunch or dinner. Many days are shorter than that; maybe handball or TV or running an errand takes precedence or my attention away. Or I just end up reading. I write Monday through Friday, if I can.

If I am working in a TV writers’ room, I don’t have nearly as much time to write, so I’ll steal time on nights and weekends. Driving in the car for up to four hours a day, as tedious as it is, does sometimes give me time to think in a way that sitting at a desk does not.

4. What are you reading right now?
So many things! Too many. The Blinds by Adam Sternbergh. How to Do Nothing by Jenny Odell. I got a galley of If I Had Your Face by Frances Cha that I am very excited to dive into.

5. Which author, in your opinion, deserves wider recognition?
All of them, except for the eight people whose books are piled to the sky in every Costco. Can you imagine what that must feel like, to have your book sold next to blue jeans and shrimp? Must be amazing and also weird.

6. What is the biggest impediment to your writing life?
Me.

7. What is one thing you might change about the writing community or publishing industry?
Living in L.A. I feel like an outsider. I still have romantic notions about publishing—having my book published by Pantheon and Vintage and working with the incredible people at those places (and with my agent), it still feels like a wish fulfillment thing. So I’m not sure I’m close enough to it to have an informed opinion. I guess maybe the only thing I would venture is that sometimes it feels like there is still a New York City-centric mindset sometimes? But that might just be my own insecurity talking. Ignore me.

8. If you could go back in time and talk to the earlier you, before you started Interior Chinatown, what would you say?
“Oh man. I’m sorry. Sucks to be you.” And also: “Stay hydrated.”

9. Who is your most trusted reader of your work and why?
My editor, Tim O’Connell, and my agent, Julie Barer. They are both astute, generous, and see right into my blind spots in ways that continually humble and surprise me. For TV work, it’s my wife, Michelle Jue. I bounce pitches off of her, show her scripts—she’s good at pointing out where the story feels off or helping me articulate what I’m feeling but can’t quite figure out.

10. What’s the best piece of writing advice you’ve ever heard?
Read. There are a lot of formulations of this, but at the moment, Stephen King’s comes to mind: “If you want to be a writer, you must do two things above all others: read a lot and write a lot.” If you followed only the first part of that, you’d already be 90 percent of the way there.