This week’s installment of Ten Questions features Louis Edwards, whose fourth novel, Ramadan Ramsey, is out today from Amistad. The title character, Ramadan Ramsey, is born with an “unspoken well of longing.” Raised primarily by his grandmother, he loses his mother at a young age and has never met his father. His parents, Alicia and Mustafa, fell in love as teenagers in New Orleans in 1999. But Mustafa, a Syrian immigrant, was lured home by his family before he learned that Alicia had fallen pregnant. Richly imagined and epic in scope, Ramadan Ramsey charts the young boy’s journey from New Orleans to Istanbul to Aleppo, through Hurricane Katrina and war, in search of his father. “An immediate global classic, Ramadan Ramsey joins the ranks of Sula, Oliver Twist, and Moll Flanders, as a tale named for a character that invites readers into a world both hyper-local and universal,” writes Alice Randall. “New Orleans has never been more vivid on the page.” Louis Edwards is the author of three previous novels, Ten Seconds (Graywolf Press, 1991), N: A Romantic Mystery (Dutton Books, 1997), and Oscar Wilde Discovers America (Scribner, 2003). He lives in New Orleans, where he has had a decades-long career as a producer of music festivals and other special events. He is currently the chief creative officer and chief marketing officer of Festival Productions, Inc.–New Orleans, which produces the world-famous New Orleans Jazz & Heritage Festival (aka Jazz Fest). 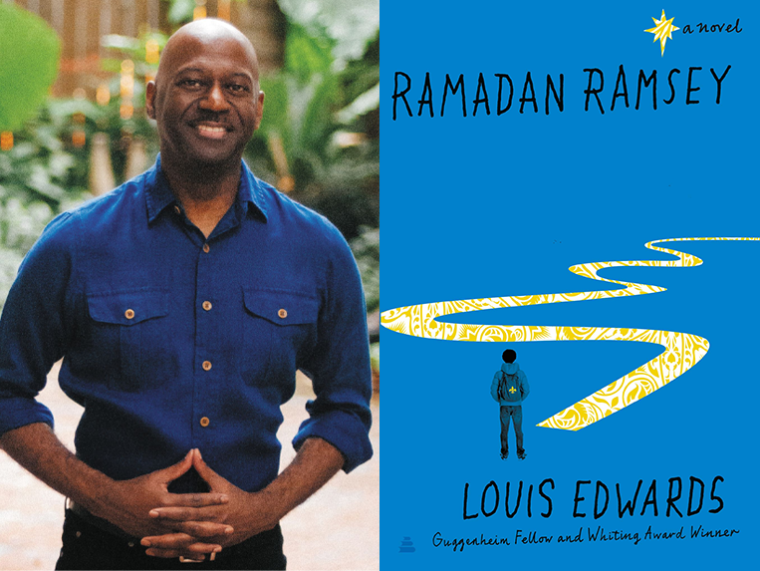 1. How long did it take you to write Ramadan Ramsey?
Actual writing time, about five years. But the book had a very long gestation period. More than twenty years passed between my having the first inkling of the idea for the title character to writing the last word of the book. Only now as I’m saying that do I realize that the inkling and the very last word are one and the same thing.

2. What is the earliest memory that you associate with the book?
Well, that’s easy—and this is what precipitated that inkling I just mentioned—one afternoon in the late nineties, I was pumping gas outside a convenience store when I witnessed a flirtation, mostly wordless, between a young man who worked inside the store and a young woman. She was Black, he was Middle Eastern, and their encounter, filled with mutual attraction and quiet daring, played out near where I was standing. It was thrilling and cinematic. What might become of their obvious mutual attraction? I wanted to know the answer. I definitely wanted to see that movie. But, then, I write books.

3. What was the most challenging thing about writing the book?
The middle phase of editing this novel involved paring the story down to its essentials. I’d written a couple of long sequences for fun that didn’t make the cut. Sometimes making a necessary edit, lightening the load, can feel like heavy lifting.

4. Where, when, and how often do you write?
I write when an idea, story, or book commands me to. I’ve been fortunate that writing has never been my job. Interestingly, working in a full-time capacity, apart from the literary world or academia, has given me the luxury of writing strictly for pleasure. The downside of the day job, of course, is sometimes the difficulty of finding the time to write. For Ramadan Ramsey, during a couple of years of the most intense writing, I’d start the “work” of imagining at around 4:30 or 5 AM, which was a new experience for me. You hear people speak dreamily about how “oh, the world is such a different place before dawn….” Guess what: It is.

5. What are you reading right now?
I just finished N. K. Jemisin’s The Fifth Season, book one in her Broken Earth trilogy. Unusual reading for me, but refreshing. For much of this gruesome pandemic I retreated to Shakespeare. Play after play. Tragedy, he reminds us, is no match for language. Poetry wins every time.

6. Which author, in your opinion, deserves wider recognition?
The late, great Albert Murray. He’s well known in some circles, but he certainly should be better known and read, especially by writers. There are two Library of America volumes of Mr. Murray’s work, one of the novels and another of his vital nonfiction, including “The Omni-Americans,” his 1970 masterpiece in which he redefines America and American culture and shatters simplistic notions about race. Not included in either of those volumes is Trading Twelves: The Selected Letters of Ralph Ellison and Albert Murray. A must-read for writers. The remarkable camaraderie, the erudition, the triumph of style. They’re like a literary Butch Cassidy and the Sundance Kid, but Black and intellectual. It will leave writers wishing there was a Tinder or Match.com for writers, so that you could find your literary soulmate and engage in a lifelong correspondence as enthralling as marital bliss.

7. What is the biggest impediment to your writing life?
The twenty-four-hour daily cycle of being. The requirement for sleep. The marvels of the NFL, the NBA, Major League Baseball, Venus and Serena. More and more, the dwindling amount of time I have left on the planet.

8. What is one thing that your agent or editor told you during the process of publishing this book that stuck with you?
One day about three years ago, after a great call with Joy Harris, my agent, about editing ideas, I laid the manuscript out in sections on my dining room table, took a shot of the scene with my phone, and e-mailed it to her with a “thanks.” Joy said, “What a perfect picture,” and when the book was published the photograph would earn her caption: “A writer digs in.”

9. Who is your most trusted reader of your work and why?
I’m not a big sharer of works-in-progress. But my sister, Marla—bless her—reads anything I dare send her.

“Show up no matter what so your writing knows you are there.” —Azareen Van der Vliet Oloomi, author of Savage Tongues

“The hardest part of writing Virga was finding the courage to be vulnerable on the page.” —Shin Yu Pai, author of Virga