This week’s installment of Ten Questions features Azareen Van der Vliet Oloomi, whose third novel, Savage Tongues, is out today from Houghton Mifflin Harcourt. Savage Tongues begins on an airplane: The narrator, an Iranian American writer named Arezu, is en route to Marbella, Spain, for the first time in twenty years. As a teenager she had come to the city to spend the summer with her negligent father, but instead arrived to an empty apartment and became ensnared in an affair with his step-nephew, a sadistic man over twice her age. Arezu is returning to Marbella now, accompanied by her best friend, Ellie, “to conduct emotional fieldwork, to turn the soil with a plow and unearth the past, loosen its hold on the person I had become.” With searching intelligence and firm moral conviction, she seeks new language to describe both the private violence in her past and the public violence that surrounds her in the world. “This uncompromising novel lives at the border of memory and dream, restlessly seeking a logic that can transform cruelty into love,” writes Garth Greenwell. Azareen Van der Vliet Oloomi is the author of two previous novels, Call Me Zebra (Houghton Mifflin Harcourt, 2018), which won the 2019 PEN/Faulkner Award for Fiction, and Fra Keeler (Dorothy, 2012). She is the recipient of a Whiting Award, as well as fellowships from MacDowell and Ledig House. Her writing can also be found in BOMB, Granta, Guernica, the New York Times, and the Paris Review, among other publications. 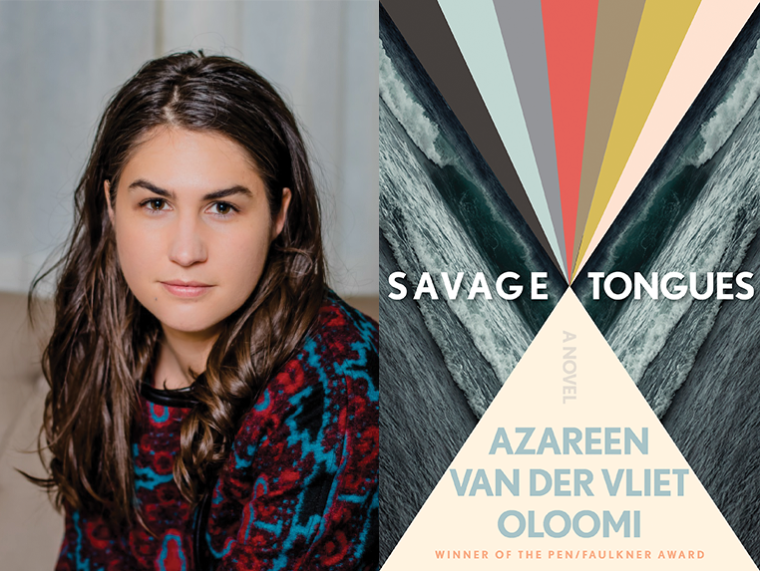 1. How long did it take you to write Savage Tongues?
It took me one year to draft the novel and another two to revise it.

2. What was the most challenging thing about writing the book?
There are a lot of layers to Savage Tongues; the novel investigates the many ways that our personal scars relate to the wounds of history. We’ve been taught to think of gender-based abuse along the lines of victim/aggressor rather than understanding intimate violence as part of centuries-long tides of geopolitical crisis. It was challenging to capture the narrator’s fractured interiority as she processes the effects of her trauma while also registering the historical and colonial dimensions of her grief.

3. Where, when, and how often do you write?
I write daily, often in the mornings, at my desk. I like to daydream about writing in bed or while I’m walking my dogs in the evenings.

4. What are you reading right now?
Rachel Cusk’s Second Place.

5. Which author, in your opinion, deserves wider recognition?
Amina Cain, whose first novel, Indelicacy, is excellent.

6. What is the biggest impediment to your writing life?
While I enjoy teaching, it does make it difficult to have the kind of uninterrupted writing time that is so critical to finishing a book.

7. What is one thing that surprised you during the writing of Savage Tongues?
I didn’t expect the apartment that Arezu inherits, where the majority of the scenes unfold, to take on a life of its own or to be quite as haunted/haunting!

8. What, if anything, will you miss most about working on the book?
I enjoyed writing about the writing life through the perspective of the narrator. Following her about as she reflected on her book tour was quite the delight.

9. Who is your most trusted reader of your work and why?
I always ask my partner to read my work first. He is a Medieval scholar and a literary critic who is deeply invested in journey narratives that have a touch of the speculative. He is, in many ways, my ideal reader. And he is always honest, for good and for bad.

10. What’s the best piece of writing advice you’ve ever heard?
Show up no matter what so your writing knows you are there.

“The hardest part of writing Virga was finding the courage to be vulnerable on the page.” —Shin Yu Pai, author of Virga