This week’s installment of Ten Questions features Shin Yu Pai, whose latest poetry collection, Virga, will be published on August 1 by Empty Bowl. In Virga, Pai models how to live with openness and intention. The title poem begins, “as young people we are / taught to hold our tears,” but ends, “the lesson / now to pour down & resound.” Like the meteorological virgae—columns of rain that evaporate before reaching the earth—Pai’s poetry inspires great depth of feeling. The opening poem describes the loneliness of gathering virtually for meditation and the loss of a beloved teacher. Another, titled “White savior industrial complex,” addresses how activism can steamroll the marginalized people it purports to serve. Informed by Buddhist thought and various in form, the poems of Virga are searching, meditative, and incisive. Shin Yu Pai is a writer, photographer, and editor based in the Pacific Northwest. She is the author of several previous poetry collections, including Ensō (Entre Rios Books, 2020), Aux Arcs (La Alameda Press, 2013), and Adamantine (White Pine Press, 2010). She received her MFA from the School of the Art Institute of Chicago. Her writing can also be found in Atlas Obscura, the Rumpus, and the Stranger, among other publications. From 2015 to 2017 she served as the fourth poet laureate of Redmond, Washington. 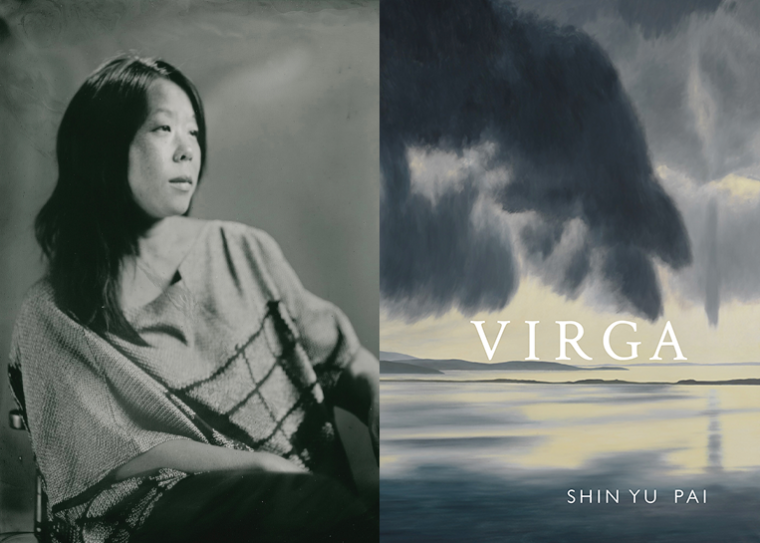 1. How long did it take you to write Virga?
Virga collects work written largely between 2018 and 2021. At the end of last year I realized that I had enough poems to put together a new book. I sat down in January to assemble the collection, which came together very quickly when it was clear that there were a few specific themes guiding the book. There are also some older poems from my son’s early years included in Virga.

2. What was the most challenging thing about writing the book?
In Virga I write about my relationship to teachers and one particular teacher who had a significant impact on my life. That person ended their life in July 2018, which spurred a deeply personal and spiritual crisis in me that required the reexamination of my faith, belief, and life choices at all levels. The hardest part of writing Virga was finding the courage to be vulnerable on the page in the face of different kinds of grief and loss and documenting the journey back to myself with honesty.

3. Where, when, and how often do you write?
I write in my backyard cottage, in my home office, on the bus, during and after meditation, after going for morning runs, after my son goes to bed at night, and whenever the muse visits. I don’t have a daily practice due to the circumstances of my current life. I try to save up different things I’m working on and then block out a few hours once a month to dig into writing and revising. Now that my son is a bit older, I’d imagine that one- or two-week retreats would be tremendously productive for me.

4. What are you reading right now?
I just finished reading Téa Obreht’s The Tiger’s Wife. I’m rereading for the second time Jessica J. Lee’s Two Trees Make a Forest, a memoir of the author’s connection to her Taiwanese identity. Sitting on my desk right now is a copy of Madeline Miller’s Circe.

5. Which author, in your opinion, deserves wider recognition?
I like to champion Koon Woon. Koon is local to Seattle, where I’m based, and has uplifted the work of emerging and established writers for a long time through his work as publisher of Goldfish Press. Koon’s work is innovative, provocative, and grounded in his specific experiences as a Chinese immigrant. His book Water Chasing Water from Kaya Press—a fine publisher of works from Asian diasporic writers—is a wonderful introduction to his collected works.

6. What is the biggest impediment to your writing life?
Time. I work full-time and have a young child at home. There are many demands on my time on a day-to-day basis. It’s hard to make or find time on a consistent basis, particularly during a pandemic. The pandemic has been a humongous impediment to my writing. So has the formlessness of summer.

7. Outside of writing, what other forms of work were essential to the creation of Virga?
The poem sequence “Tidal,” which appears in Virga, is actually a series of poems that I wrote for U.K. filmmaker David Ian Bickley. He was working with some water and tidal imagery that he had collected over the years and was interested in having me write a text that could reflect on tides as a metaphor for karmic forces. He shared some of that footage with me before and as I was working on the sequence. I recorded a voiceover of the video poem and he put the whole thing together. You can view two sections of that work online.

Likewise, “Embarkation” grew out of a collaboration with video artist Scott Keva James and originated in a performance piece that I created for the stage a few years ago. When I think about it, performance is an element of many of the texts in this book—there are ritual-type invocations and a David Antin–style talk poem that meditates on ritual, or sacred art, and the casting of sacred reliquary objects.

My writing has always been deeply engaged with the visual arts and there’s a series of poems that was inspired by the work of sculptor Richard Serra. The artist Michael Swaine, from Future Farmers, makes an appearance in “Anything can go wrong at any time.”

8. How did you know when the book was finished?
The book was accepted for publication by Empty Bowl in an earlier draft form. At the point where I knew the book would be coming into the world, I turned back to my notebooks to surface a dozen or so poems that would work in Virga and complement and fill out existing themes in the book.

9. Who is your most trusted reader of your work and why?
I met the poet Rick Benjamin at the 2006 Dodge Poetry Festival and we’ve been friends and readers of each other’s work ever since. Rick has a distinctly Buddhist sensibility, as I do. And his work is grounded in notions of desire, longing, and the body. I occasionally share poems and glimpses of work in early draft phases with Rick for a gut check.

10. What’s the best piece of writing advice you’ve ever heard?
I can’t actually think of anything that’s stayed with me in the context of writing advice. There are lots of tired chestnuts that are recycled from one writing workshop instructor to the next that have been repeated ad nauseum.

My friend Tom Gilroy, with whom I write haiku, has often talked to me of the importance of seizing the energy of a moment. Along the lines of “If someone hands you a microphone and a train is coming towards you, what are you going to do? Sing.” I take it as some variation of the Zen koan about the man eating a strawberry who hangs off a cliff faced with tigers on either side of him. All writing advice is its own koan until we crack the code for ourselves. It boils down to embracing the act in the moment.