This week’s installment of Ten Questions features Katie Kitamura, whose fourth novel, Intimacies, is out today from Riverhead Books. In the wake of her father’s death, the narrator of Intimacies decides to leave New York City to serve a one-year contract as an interpreter at the International Criminal Court in The Hague. Proficient in five languages and keenly observant, she is accustomed to complexity in both her professional life and social world. Of the Court, she writes, “What was at stake was nothing less than the suffering of thousands of people, and in suffering there could be no question of pretense. And yet the Court was by nature a place of high theatrics.” But the narrator’s aptitude for interpretation is tested like never before when she steps in to work on a particularly high-profile case concerning a former president accused of ethnic cleansing and other war crimes. Simultaneously, she is wrestling with whether The Hague can ever truly become a home, a question complicated by an uncertain relationship with a lover. Intimacies is a novel attuned to cerebral and emotional contradictions of all scales. “Katie Kitamura is among the most brilliant and profound writers at work today,” writes Garth Greenwell. “She reminds me how high the moral stakes of fiction can be.” Katie Kitamura’s third novel, A Separation, was a finalist for the Premio Gregor von Rezzori and a New York Times Notable Book. Her first and second novels, The Longshot and Gone to the Forest, were both finalists for the New York Public Library’s Young Lions Fiction Award. She teaches in the creative writing program at New York University. 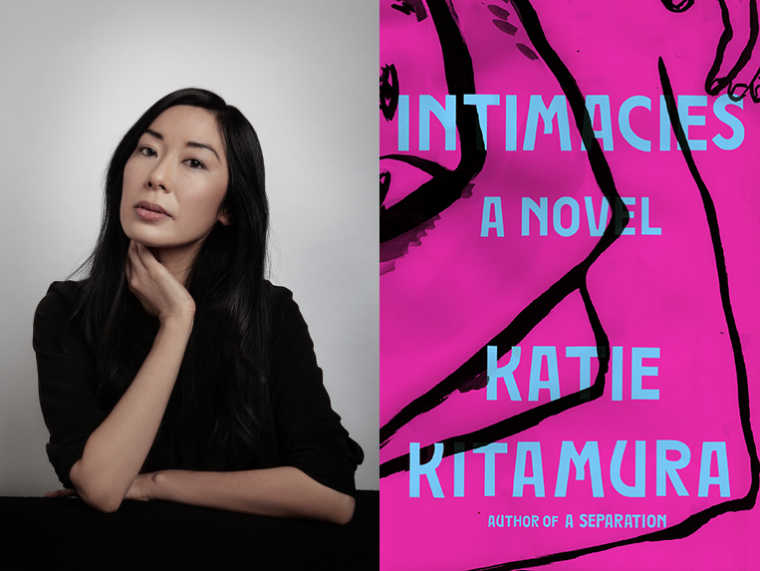 1. How long did it take you to write Intimacies?
There’s a four-year gap between the publication of my last novel and the publication of this one. But there was a lot that happened in those four years, apart from the writing. That just seems to be how it is for the time being. I rarely get a stretch of consecutive days to write, and the writing takes place alongside a lot of other things, and eventually a manuscript emerges.

2. What is the earliest memory that you associate with the book?
I was listening to the radio in 2009 when I heard a clip of Charles Taylor speaking at his trial in The Hague. Taylor was known for his oratorical powers, and his speech was monstrous and pompous, but undeniably compelling. The disquiet of that combination stayed with me, and I only write about the things that haunt me in some way.

3. What was the most challenging thing about writing the book?
The end of the book. I didn’t know exactly what would happen, or what choices the various characters would make, but I did know that I wanted it to feel very different to the end of my previous novel, A Separation. In that novel there’s a real sense of claustrophobia and paralysis at the end—I wanted the end of Intimacies to feel the opposite, like a door opening up, both for the characters and the reader.

4. Where, when, and how often do you write?
In theory I write best in the morning, and in theory I am able to write every day. In practice I write when I can and with no discernible schedule. I do find that if I’m not writing, I need to be reading. Reading is such a big part of the work of writing, and a lot of things come unknotted in my head when I read. I find solutions to problems that aren’t necessarily apparent when I’m sitting in front of my computer.

5. What are you reading right now?
Deborah Levy’s Real Estate.

6. Which author, in your opinion, deserves wider recognition?
There are many. In particular I always wish there was a wider readership for work in translation. Much of the fiction I read is in translation and that has influenced the way I write. Reading in translation of course brings me into contact with more of the world. It also reminds me that the rules of fiction are not fixed, and that the conventions of storytelling vary according to culture and literary tradition. For that I’m grateful to publishers like New Directions, Archipelago, Fitzcarraldo, And Other Stories, Europa, Transit, Open Letter, Charco Press, among many others.

7. What is one thing that your agent or editor told you during the process of publishing this book that stuck with you?
My agent, on the first read, told me that it was a book about many things and not one thing, and that it should remain that way through the editing process.

8. If you could go back in time and talk to the earlier you, before you started Intimacies, what would you say?
Nothing specific to the book. Nothing even that specific to my personal life. But many things about the world and its various turns of events.

9. Who is your most trusted reader of your work and why?
My husband. It’s in his best interests to tell me the truth, but he knows how to present it in the kindest, least painful way possible.

10. What’s the best piece of writing advice you’ve ever heard?
You have to keep doing it. That is much harder than it sounds.