This week’s installment of Ten Questions features Lauren Acampora, whose novel The Hundred Waters is out today from Grove Press. In this suburban Gothic tale, Louisa Rader is more than a decade into her decision to abandon her New York City art career and return to the Connecticut upper-crust community where she was raised. But the imagined safety of Louisa’s childhood has been replaced by the ominous presence of global environmental catastrophe and local children made ill by buried environmental hazards. Louisa distracts herself from these dangers, and the brooding personalities of her architect husband and twelve-year-old daughter, Sylvie, by running the local art center. But she loses her bearings when she meets Gabriel, the eighteen-year-old artist son of an aristocratic European couple who has moved to town. Arrogant and all-too-sure of his talent, Gabriel manages to insert himself at the art center and to draw both Louisa and Sylvie into his orbit, unsettling the tranquility of their family life and the elite bubble of this Connecticut town. Publishers Weekly calls The Hundred Waters “arresting.... Acampora achieves a sharp and tense depiction of an illusory and stultifying haven.” Lauren Acampora is the author of the novel The Paper Wasp (2019) and the story collection The Wonder Garden (2015), both from Grove Press. She is a 2021 New York State Council on the Arts/New York Foundation for the Arts fellow in fiction. 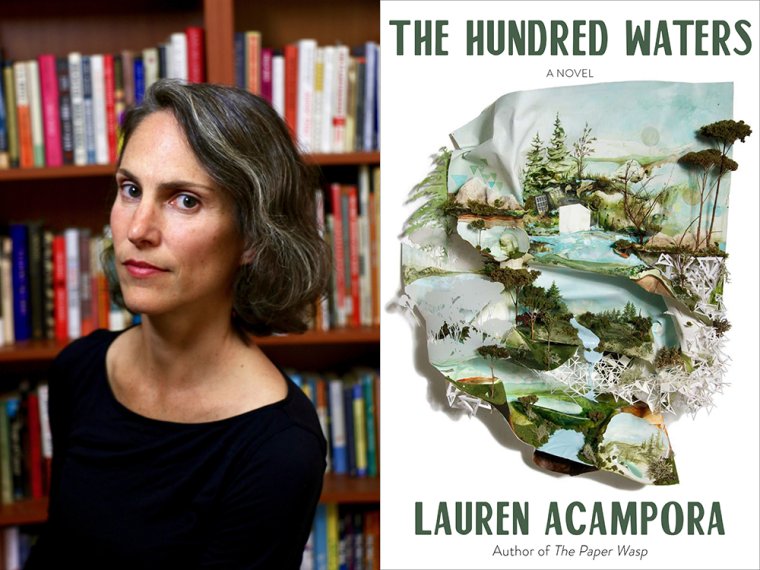 1. How long did it take you to write The Hundred Waters?
Ha. Let’s just say this book is old enough to vote.

2. What was the most challenging thing about writing the book?
The biggest challenge was keeping faith over time while I searched for the heart of the story. Although this is my third published book, it’s actually my firstborn. I began noodling with it long ago, before I’d published anything at all, before I had any business attempting a novel. At the beginning, it wasn’t even a book so much as a series of images in my head, and the words came in fits and starts for a long time before taking shape as anything concrete. The pages went in the proverbial drawer for years before coming back out—and then going back in again. Each time I revisited the manuscript, I changed it drastically. I don’t think a single sentence remains from the original draft. The book and I grew up together, and only as I got older was I able to drill down to the true core of this story about youth and age, choices and regret.

3. Where, when, and how often do you write?
Anywhere I can, whenever I can. This usually means at home during the school day, summer-camp day, or while my daughter is otherwise occupied and I don’t have more pressing administrative or household duties that are crucial to maintaining life. I’m also largely comatose in the morning and usually hit my stride after lunch—although I’m forever trying to change that. But I don’t worry so much anymore about missing a day or a week, or whatever, if life intervenes. I’ve found that everything’s still there when I get back—and often a lot more. There’s a lot to be said for fresh eyes.

4. What are you reading right now?
I’ve finally gotten around to reading Elena Ferrante’s Neapolitan novels and am completely captivated. I haven’t had this kind of immersive experience since reading Proust. It really feels like inhabiting another life.

6. What trait do you most value in your editor or agent?
My agent, Bill Clegg, and my editors at Grove, Katie Raissian and Elisabeth Schmitz, are hugely gifted readers—geniuses who are able to see structural issues that I may not. All of them push me to find the thrust of the story and bring it to the most powerful climax, to not be afraid to take it there.

7. What is one thing that your agent or editor told you during the process of publishing this book that stuck with you?
Years ago, when I’d determined to put the novel away for a while, my agent gave his blessings and told me, “This book will be published someday.” He believed it, and that helped me believe it too.

8. What forms of work, other than writing, did you have to do to complete this book?
For a long time, I worked full-time as a grant writer to support myself. The other “work” that turned out to be crucial to finishing the book was raising my daughter. Without that experience, I wouldn’t have had the same insight into the variety of mother-daughter relationships, the wide variety of adolescent girls, or the harrowing nature of the love and fear that comes with parenthood.

9. What, if anything, will you miss most about working on the book?
Seeing this book published feels like sending a grown child out of the house. I’m proud, devastated, frightened, and thrilled all at once. These characters have been in my head for so long that they seem more real to me than some people. Coincidentally one of the characters is eighteen and ready to fly from the nest, so to speak. I had a dream the other night that he kept trying to come back in through the door, and I was yelling at him to leave. I’ll miss him and the others, to be sure, but it’s time for them to be out in the world.

10. What’s the best piece of writing advice you’ve ever heard?
Keep your butt in the chair.