This week’s installment of Ten Questions features Keith Gessen, whose second novel, A Terrible Country, is out this month from Viking. A literary portrait of modern Russia, A Terrible Country tells the story of Andrei, a young academic living in New York who is called back to Moscow on the eve of the 2008 financial crisis to care for his grandmother. Once there, Andrei sees a country still grappling with the legacy of Soviet Russia and exhausted by Putin’s capitalism. “Gessen’s particular gift is his ability to effortlessly and charmingly engage with big ideas...while still managing to tell a moving and entertaining human story,” says George Saunders. “At a time when people are wondering whether art can rise to the current confusing poliltical moment, this novel is a reassurance from a wonderful and important writer.” Gessen is also the author of All the Sad Young Literary Men (Viking, 2008) and a founding editor of n+1. He is the editor of three nonfiction books and the translator or cotranslator, from Russian, of a collection of short stories, a book of poems, and a work of oral history, Nobel Prize-winner Svetlana Alexievich’s Voices From Chernobyl: The Oral History of a Nuclear Diaster (Dalkey Archive Press, 2005). A contributor to the New Yorker and the London Review of Books, Gessen teaches journalism at Columbia University. 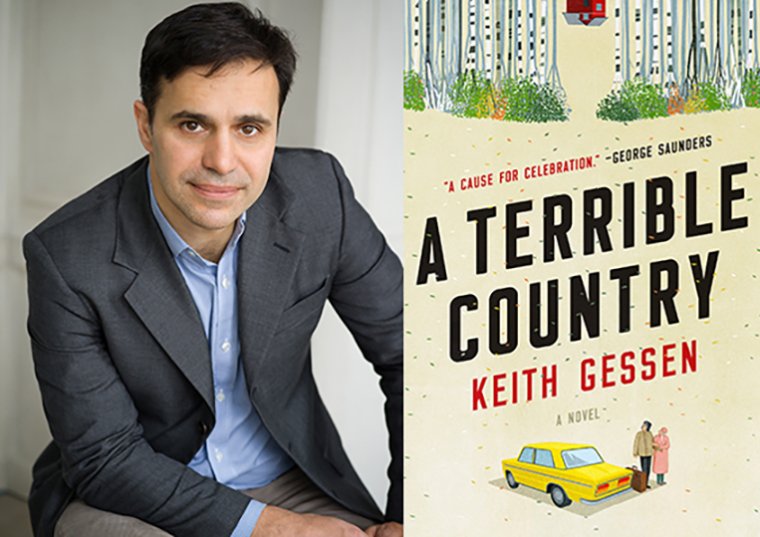 1. How long did it take you to write A Terrible Country?
It took eight years. This is a little embarrassing to admit because it’s not like the book is a thousand pages long. At one point during the writing of it a friend who works in finance asked how long it would physically take to type a book if you knew all the words already, and the answer in my case, given how fast I type, was one week. And yet it still took eight years.

2. Where, when, and how often do you write?
If I’m writing, then the answer is whenever and however I can—in notebooks, on scraps of paper, whatever. I wrote large portions of this book in the Gmail app of my old Blackberry while on the subway. That was a great writing phone. Now I use “Notes” on the iPhone—am using it right now in fact—and of course compared to the old Blackberries the keyboard on the iPhone is bullshit. Progress isn’t always progressive.

3. What was the most surprising thing about the publication process?
It’s been ten years since I published my first/previous novel, so a lot has changed. One obvious thing is the number of new outlets that do interviews, podcasts, etc.—I thought I would find this annoying but actually I like it. I’ve met a bunch of great readers and writers already just through the various interviews.

4. Where did you first get published?
My first non-student publication was in AGNI. I sent a story to Sven Birkerts through my friend George Scialabba, and he took it. I was just out of grad school and wondering if anyone outside my workshop would ever read anything I wrote, so it was very encouraging.

5. What are you reading right now?
Sheila Heti’s Motherhood and Tony Wood’s forthcoming Russia Without Putin. Both excellent.

6. If you were stuck on a desert island, which book would you want with you?
A classic question but I find it hard to answer. Under what circumstances did I arrive on this island? Will I have an opportunity to seek revenge on the forces that put me here? And how long am I here for? Am I Lenin in Finland, just biding my time until I return, or Trotsky in Mexico, counting the days till my assassins arrive? Is this a difficult island to survive on—is it literally a desert?—or an easy one? Would I find it useful and heartening to read about someone in a similar situation, like Robinson Crusoe, or would I find it annoying because he had it so much easier? Finally, who owns the island? Do I need to pay rent?

7. Who is the most underrated author, in your opinion?
Rebecca Curtis. She should be a household name.

8. What is the biggest impediment to your writing life?
Sloth. Indecision. Inconstancy.

9. What trait do you most value in your editor or agent?
My editor at Viking, Allison Lorentzen, is amazing. She is brilliant and ruthless and thoughtful, all at once. I guess if there’s one particular trait, at the risk of sounding cheesy, it’s passion. Or commitment, to choose a more respectable-sounding word. Either way, it’s the ability to persevere in a very tough business, living with both constant pressure and constant disappointment. You can’t keep doing it and doing it well if you don’t care.

10. What’s the best piece of writing advice you’ve ever heard?
I once heard George Saunders tell a story about being edited at the New Yorker, where his editor kept asking him to cut a highly precise number of lines—18 lines, 25 lines. And George would go do it each time thinking that the editor had a very specific vision for his story. But then he realized the editor just wanted it to be shorter. And the advice here was: There’s almost no piece of writing that can’t be improved by removing 18, then 25, then 21 lines; i.e. you can almost always make something better by making it shorter. This interview being the rare exception to that rule.

“I’m still amazed by the decisions that get made that can make or break a book before it even hits the shelves.” —Lee Martin, author of the story collection The Mutual UFO Network, published today by Dzanc Books