This week’s installment of Ten Questions features debut author Akil Kumarasamy, whose collection of linked stories, Half Gods, published today by Farrar, Straus and Giroux, “portrays with sharp clarity the ways in which parents, children, and friends act as unknowing mirrors to each other, revealing in their all-too-human weaknesses, hopes, and sorrows a connection to the divine.” Kumarasamy’s fiction has appeared in Harper’s Magazine, American Short Fiction, Boston Review, and elsewhere. She received her MFA from the University of Michigan, and has been a fiction fellow at the Fine Arts Work Center in Provincetown and the University of East Anglia. 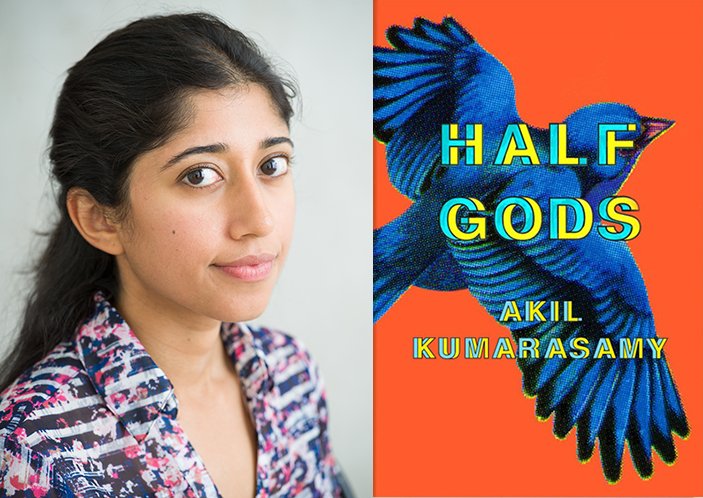 Akil Kumarasamy, author of Half Gods (Farrar, Straus and Giroux).

1. Where, when, and how often do you write?
I usually write at home or at a café, but I’m pretty open to working anywhere. I don’t necessarily write every day; sometimes I just let an idea sit for a while, seep in my head. I might write ferociously for a week and then have a period where I don’t write at all. Maybe it’s a kind of mental crop rotation, giving the mind time to rest before the next creative burst. For Half Gods, I often wrote at night. I liked working while everyone else was sleeping. I think it made the act feel secretive, like I was tapping into some unknown frequency. Now I’m trying to write in the mornings. It feels more responsible.

2. How long did it take you to write Half Gods?
It took a few years of actual writing, but the earliest portion of the book was written in 2010.

3. What was the most surprising thing about the publication process?
How long the process takes! From selling the manuscript to the actual publication, it takes around a year and half. I’ve been working on a second book and feel pretty involved it, so it’s interesting now having to discuss Half Gods, which to me feels like a different version of myself.

4. Would you recommend writers pursue an MFA?
It definitely depends on what you’re looking for. There are many paths toward publication and getting an MFA is just one of them. It can possibly offer the time to fine-tune one’s craft, financial flexibility, and community.

5. What are you reading right now?
I’m reading Elena Ferrante’s My Brilliant Friend and Catherine Lacey’s Certain American States, which is out in August. It’s amazing.

6. If you were stuck on a desert island, which book would you want with you?
I would want a book on how to appreciate and thrive on a desert island while you are away from humanity and the appendix should have the directions on how to build a canoe when you/if you want to reconnect with the rest of the world. In other words, maybe some Chekov.

7. Who is the most underrated author, in your opinion?
Well think about how many wonderful books don’t get translated into English. The English language is currency.

8. What is the biggest impediment to your writing life?
It’s probably myself. What I think is possible.

9. What trait do you most value in your editor or agent?
Their unwavering belief in me. It feels extraordinary.

10. What’s the best piece of writing advice you’ve ever heard?
There’s no such thing as writer’s block. Sometimes you go to the computer and nothing valuable comes out and that’s okay. It’s all about how you see the writing process. You don’t need to call it writer’s block and you don’t need to feel guilty when you’re not sitting by the computer. The work requires so much of you that if the guilt doesn’t make you more productive, then the feeling is not worth it. You always have a choice in how you are going to perceive something.