This week’s installment of Ten Questions features Jack Wang, whose debut story collection, We Two Alone, will be published next week by HarperVia. Through the seven stories that make up We Two Alone, Wang offers a window into the complexity and diversity of experiences in the Chinese diaspora over the past century. In the title story, a struggling actor and founder of an Asian American Shakespeare company in New York City wrestles with dissatisfaction and heartache. In “The Valkyries,” set in early-twentieth-century Vancouver, a young Chinese boy is turned away from a men’s hockey team and so disguises himself in order to play alongside women. With other stories set in Nazi-occupied Vienna and Apartheid-era South Africa, We Two Alone is an ambitious collection that is richly imagined at every turn. “These stories are so elegantly shaped, so satisfying as individual stories, that their collective power sneaks up on you,” writes Emily Fridlund. We Two Alone was first published last year by House of Anansi Press in Canada. Wang’s writing can also be found in the Humber Literary Review, Joyland, the Malahat Review, the New Quarterly, and Prism International. He holds an MFA from the University of Arizona and a PhD from Florida State University. He lives in Ithaca, New York, where he teaches at Ithaca College. 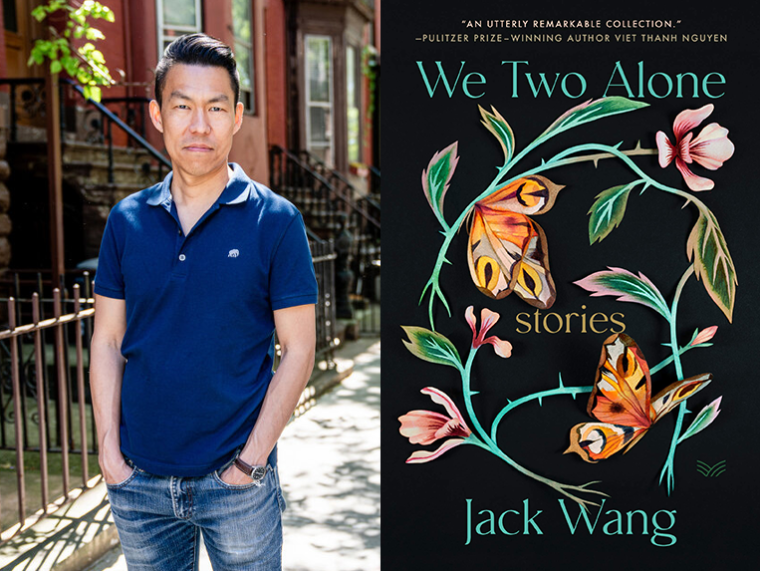 1. How long did it take you to write We Two Alone?
About eight years, going back and forth between projects. My Canadian editor asked me to add a story to the collection after the book sold, so that extended the process.

2. What is the earliest memory that you associate with the book?
I started working on these stories after putting a novel in the proverbial drawer. I remember the freedom of getting to invent something new after grinding away at the same story for so many years. I also remember the pleasure of working on something short and crossing the finish line quickly, even if the collection itself took a while to complete.

3. What was the most challenging thing about writing the book?
As I mentioned, when I started these stories, I’d just retired a novel. This novel was read by a few publishers, but in the end there were no takers. So, after writing for many years and coming close to debuting, I suddenly found myself back at square one. That was probably the hardest thing, being almost forty, with young kids, and staring up again from the bottom of the mountain. But I found a way.

4. Where, when, and how often do you write?
A few years ago my wife and I renovated the second floor of our house in Ithaca, New York, and we turned the master closet into an office so that I wouldn’t have to write in the bedroom. It’s a windowless room that would probably crush the spirit of most writers, but it’s mine, and I love it. When I’m in the middle of a project, as I am now—I’m working on a new novel—I write every morning.

5. What are you reading right now?
Land of Big Numbers by Te-Ping Chen, which just came out in February. It’s a terrific collection of short stories about contemporary China and recent Chinese immigrants to the United States.

6. Which author, in your opinion, deserves wider recognition?
Gil Adamson. Gil is fairly well-known in Canada—her literary Western, Ridgerunner, won the 2020 Writers’ Trust Fiction Prize—but she should have a wider following in the United States. She’s a good old-fashioned storyteller who writes lush, gorgeous prose.

7. What is one thing you might change about the writing community or publishing industry?
The only rejection I received that bothered me was from the editor who said they’d just published a Chinese American writer. I read about something similar in the New York Times article, “Just How White Is the Publishing Industry?” Apparently someone at a major house was reluctant to make an offer to a Black author because they’d already published a Black author. It’s high time editors stopped thinking of BIPOC writers in terms of quotas.

8. Outside of writing, what other forms of work were essential to the creation of We Two Alone?
I did a lot of research for these stories. We Two Alone is set on five continents and spans nearly a century. I’m familiar with places like Vancouver, Shanghai, London, and New York City, where some of these stories are set, but many of the times, places, and events I was writing about—women’s hockey in Western Canada in the 1920s, the Second Sino-Japanese War, Kristallnacht, Apartheid—were less known to me. So I read a lot of books, everything from obscure diplomatic and scientific memoirs to dissertations in the British Library.

9. Who is your most trusted reader of your work and why?
My wife, Angelina Mirabella, is a novelist. She’s always my first and best reader, even—or maybe especially—when the things she tells me aren’t easy to hear.

10. What’s the best piece of writing advice you’ve ever heard?
Isak Dinesen said, “Write a little every day, without hope, without despair.” The trick is to cultivate that Zen, to not get too high or too low. You’re neither the genius nor the failure you think you are.

Corrections: A previous version of this article misstated the title of the book and misattributed the blurb that appears in the introduction.

“I will miss these characters living in my head.” —Monica West, author of Revival Season