This week’s installment of Ten Questions features Brian Broome, whose debut memoir, Punch Me Up to the Gods, is out today from Houghton Mifflin Harcourt. Broome begins his story at a bus stop in Pennsylvania, where he watches a young Black boy fall on the pavement, only to have his tears admonished by his father. “I realize that this, what I am witnessing, is the playing out of one of the very conditions that have dogged my entire existence: this ‘being a man’ to the exclusion of all other things,” he writes. Traveling back and forth in time, Broome retraces his own journey as a Black gay man, detailing the violence and alienation he weathered as a child in small-town Ohio, the racism and homophobia that followed him into adulthood, and the unexpected moments of hope and tenderness throughout his life. He pays tribute to those who helped him survive, while also striking out entirely on his own, seeking an understanding of Blackness and masculinity free of limits. “Punch Me Up to the Gods obliterates what we thought were the limitations of not just the American memoir, but the possibilities of the American paragraph,” writes Kiese Laymon. Brian Broome is also a poet and screenwriter. He is pursuing an MFA at the University of Pittsburgh, where he is a K. Leroy Irvis Fellow. He has been a finalist in the Moth storytelling competition and won a Martin Luther King Jr. Day Writing Award from Carnegie Mellon University. 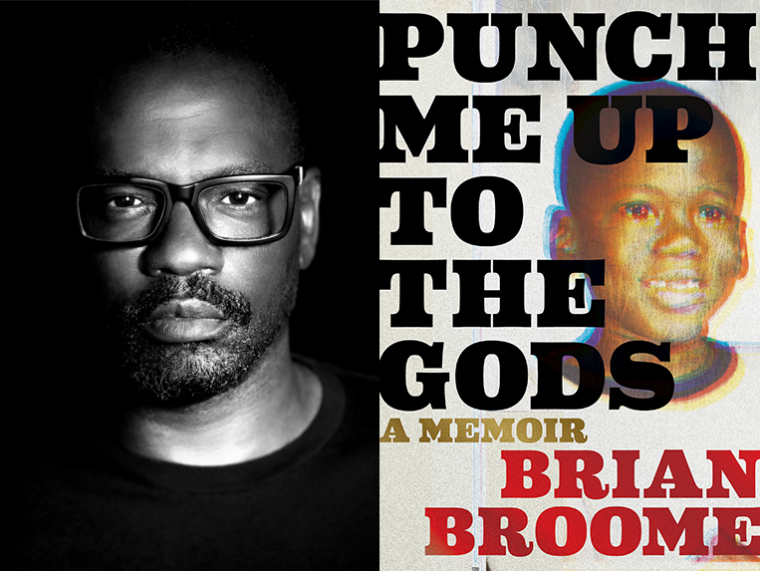 Brian Broome, author of Punch Me Up to the Gods. (Credit: Andy Johanson)

1. How long did it take you to write Punch Me Up to the Gods?
I actually started writing it eight years ago in rehab. Although, at the time, I didn’t know I was writing a book. I was just sitting in rehab writing about why I thought I ended up in rehab. But I think the official writing of a book happened when I met my agent, Danielle Chiotti, at a public reading where I performed. She asked me what I was writing and I told her that I had a few autobiographical pieces. I sent them to her. Danielle saw a cohesive book in my work that I couldn’t see at first. We worked together on connecting it all into a whole manuscript, starting in February 2018, and Danielle sent it out on submission in October 2019.

2. What was the most challenging thing about writing the book?
I had to think a great deal about the people I might damage by telling these stories. Those who are still alive, I mean. I often wondered if there would be backlash or anger. But I decided to be a servant to the story. Also, in writing about painful times from the past, I tried to put myself in the emotional state that I was in at that time. That was difficult. There were times when I was writing it that I actually felt like getting high because the feelings of worthlessness became so real.

3. Where, when, and how often do you write?
I write in my house. I’m not the kind of writer who can write in public places. I wish I were. I have an office downstairs that I’ve set up just the way I like it. The garden just behind me. I’ve painted it orange and green and I go down there during the day to do non-writing-related work. I only write at night. I turn all the lights off and sit in the dark. I find it works best because I can shut everything out. It gets really dark in my office at night. I don’t write often enough. I make up my mind to do it, give myself pep talks,  and then I talk myself out of it. Eventually, the words start to feel like they’re punching my skull from the inside and I just sit down and begin.

4. What are you reading right now?
My students’ essays. Honestly, school is taking a lot of my time right now and it’s particularly challenging when it’s online. I’m enjoying reading my students’ work, but I’d love to have nothing on my plate for a few days and just sit out back in the garden and read a book. That’s a luxury. Right now there’s a big pile. On top is Jeffrey Eugenides’s Middlesex, Ijeoma Oluo’s Mediocre: The Dangerous Legacy of White Male America, and I want to reread Flowers in the Attic by V. C. Andrews. Sometimes I’m sure I’m going to end up like Henry Bemis in that episode of The Twilight Zone. The one where all he wants to do is read and the whole world has to come to an end before he finally gets enough time. Then he breaks his only pair of reading glasses.

5. Which author, in your opinion, deserves wider recognition?
Reginald McKnight. His books The Kind of Light That Shines on Texas and White Boys really made me want to write more. He’s mastered the short story, in my opinion. I don’t really know how widely recognized his work is. But I know I don’t really hear his name mentioned a lot.

6. What is the biggest impediment to your writing life?
Me. I know it’s a cliché, but it’s really difficult to get going. There are some writers who love it and can’t wait to sit down and start pecking away. I often wonder what their secret is. As I mentioned earlier, I will avoid writing as long as I can until an idea starts ricocheting off the walls inside my head and I have to get it out. Once I sit down it’s never as terrible an experience as I thought it was going to be. But the next day I’m back at square one.

7. Would you recommend writers pursue an MFA?
I actually learned a lot and the experience itself is one I’ll never forget. The community it provides is valuable. I spent a long time writing in a vacuum and I’ve learned that this is not how you get to your best work. It also taught me a lot about the business of writing, which is important. I learned a great deal on a craft level as well. And I have very much enjoyed teaching writing. I truly believe that’s what I’m meant to do. It brings me more joy than any job I’ve ever done. Far too many people my age seem to believe they don’t have anything to learn from the young. Nothing could be further from the truth. I learn a great deal from my students.

8. What is one thing that your agent or editor told you during the process of publishing this book that stuck with you?
Both my agent, Danielle, and my editor, Rakia Clark, were incredibly supportive throughout this process. I did a lot of handwringing about what other writers or people who read my work were going to think of me and my writing. I remember sitting at the Bureau Coffee shop and Danielle telling me to stop worrying about what other people think and just to write. After she said that, she shrugged her shoulders and went back to drinking her coffee. That shoulder shrug said a lot. It said that there will always be people who hate your work, and you have to decide how much energy you’re going to give them. That was a valuable shoulder shrug because I had been laboring under the delusion that revision was tantamount to failure. Both my agent and my editor taught me that a draft is a draft and not to be afraid to make mistakes or hit the wrong note.

9. Who is your most trusted reader of your work and why?
Right now it’s just Rakia and Danielle. It’s best to keep that pool of people small, I think. Too many cooks and whatnot.

“I often worried what would come out would be scary, accusing, not close enough to the truth or too close.” —Carey Salerno, author of Tributary